Deacs fall to No. 2 Clemson in Death Valley 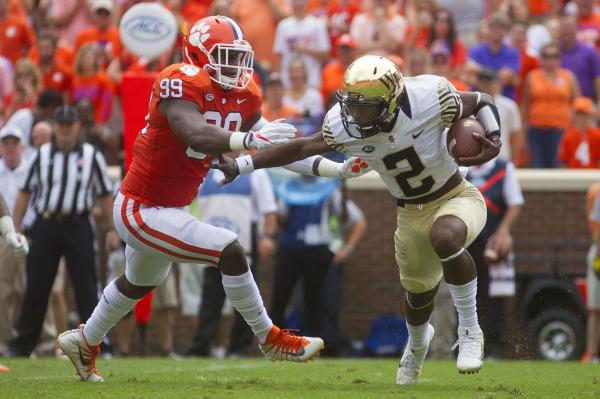 Just two days before the game, a rumor developed that senior quarterback John Wolford would not start against the No. 2 Clemson Tigers.

With no indication in the injury report that the four-year starter would miss the game, the speculation was kept to those closest to the football program.

Before the team announced moments before kickoff that redshirt sophomore Kendall Hinton would start in place of the injured Wolford — who was considered available if necessary — the Wake Forest faithful were expecting to see number 10 on the field.

As it turned out, Demon Deacon fans were not the only ones surprised to see Hinton take the field, as Clemson’s Dabo Swinney claimed after the game that he had no idea Wake Forest would have a different quarterback under center.

“That number two is good,” Swinney said of Hinton, who finished with 203 yards in the air, 92 yards on the ground and two touchdown throws in Wolford’s absence.

Despite playing one of the nation’s top defenses, Hinton delivered an admirable effort, protecting the football and extending plays with his feet at times.

After a first possession three and out, Hinton’s second possession led the offense 54 yards down the field to put Mike Weaver in field goal range. The attempt, which just barely missed, kept the Deacs off the scoreboard until the fourth quarter.

Trailing 28-0, Hinton led Wake Forest on a nine-play, 78-yard drive — eventually finding Scotty Washington on a 16-yard completion for the score. This fourth quarter touchdown was complimented by another as the Deacs capped off its longest drive of the afternoon — a 10-play, 60-yard possession — with an 11-yard touchdown to tight end Cam Serigne.

Wake Forest fell to No. 2 Clemson 28-14 at Memorial Stadium and left Death Valley with its second loss of the season to drop to 4-2 overall and 1-2 in the ACC.

At the midpoint of the season, Wake Forest has proven to be more physical than it was a year ago on both sides of the ball, especially up front. The Demon Deacon defense has been among the best in college football in tackles for loss throughout the season and the offense has done a better job at protecting its quarterbacks.

Freshman Greg Dortch has rightfully earned the recognition as one of the nation’s best first-year wide receivers and was named as the Atlantic Coast Conference’s Rookie of the Week following his 10-reception, 110-yard game against Florida State on Sept. 30.

Dortch has quickly become a favorite target of Wolford’s and has deceptively used his speed to extend plays after the catch.

“The first half of the season was a learning experience and exciting — I thank John Wolford for throwing me the ball,” Dorch said of the first six games of his career.

The Deacs will rely on Dortch to continue his production in a tough final stretch of games in the regular season. Wake Forest will travel to Georgia Tech on Saturday and will host Louisville in the subsequent week. The Deacs will then travel to Notre Dame and Syracuse before concluding the season at home against NC State and Duke.

Each of these six opponents have recorded impressive wins of their own to this point in the season, including Syracuse’s most recent upset over No. 2 Clemson. In order to reach a bowl, Wake Forest will need to win at least two of its remaining six games. However, winning two of six is not the goal of this team — the expectation is to win each week.

“[In the] second half of the season … we can get a lot better,” Dortch said moments after the loss to Clemson. Dortch claimed to be ready to go and was ready to take on Georgia Tech in that very minute.

The enthusiasm is commendable and will be needed as Wake Forest strives to make the postseason for the second straight year under coach Dave Clawson.

With a healthy Wolford and a defense that continues to play physical up front, forcing stops in the backfield, this team has the potential to play with anyone. There will be significant tests in the second half of the season and the first will be in Atlanta against a Georgia Tech team that is just “two plays away from being undefeated and ranked in the top 10” according to Clawson.

Last year the Deacs had the bye week to prepare for Army’s triple option and fell 21-13 at home. Georgia Tech will be a more difficult task and it will be interesting to see if the Wake Forest offense can start quickly and limit the time its defense has on the field.

In order for the Wake Forest to come out on top, it will need to win the turnover battle and limit the productivity of TaQuon Marshall who has rushed for nine touchdowns on the season.