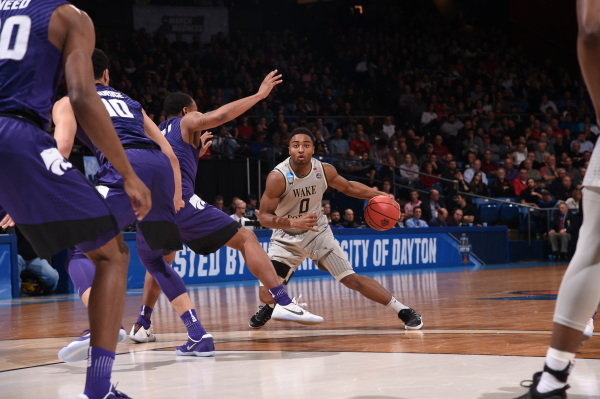 Fresh off of their first NCAA Tournament appearance since 2010, the 2017-18 Wake Forest men’s basketball team has had their taste of March Madness — but they want more.

“We got a taste last year but we want a lot more than a taste. We have to want the meal and that’s what I think our guys understand,” said head coach Danny Manning.

Indeed, the Deacons’ performance last year continued the pattern of improvement the Deacs have held under Manning since he arrived in 2010.

Finishing with a 19-14 record overall and going .500 in the notoriously difficult Atlantic Coast conference proved to media and coaches across the country that the Deacons were back, despite a disappointing loss to Kansas State in the Round of 68.

Three of the most prolific scorers on that team — John Collins, Dinos Mitoglou and Austin Arians — have taken their talents to the professional game, with Mitoglou and Arians signing contracts to play in Europe and Collins signing on with the Atlanta Hawks of the NBA as the 19th pick in the draft. As a result, Wake Forest is in the unique position of trying to capitalize on their recent success with a new-look squad.

Point guard Mitchell Wilbekin, the only scholarship senior on the squad and, along with senior Troy Rike, one of two players who have played for Manning since he arrived, will be one of the players relied upon to lead the team on the court.

“I think we’ve been taking positive steps since coach got here,” Wilbekin said at the team’s media day. “I would say the overall coaching has changed for the better. Last year we took a big step by getting to the tournament, but we realize we don’t want to just be happy by getting there, we want to get there and try to make some noise if we can. We’re just going to try to keep this thing going this year.”

The loss of Mitoglou and Arians, two of the leading three-point shooters on the Deacons, as well as Collins, who was a dominant presence in the high post and under the basket, has placed the responsibility of leading the offense in the capable and versatile hands of the Deacons’ top four returning guards; Wilbekin, Redshirt junior Keyshawn Woods and Sophomores Brandon Childress and Cousy award watch list-member Bryant Crawford.

“Our four guards have to lead the way,” Manning said. “There’ll be times we going to need [Childress] to score, distribute defend, run the team and all four of those guys are capable of doing that. At some point in time throughout the course of the year they’ll all be in those roles. I look at it and we’ll have to play pretty well each game to give ourselves a chance but I feel that they’re all capable of doing that for us.”

With a potential for an increased number of three-guard lineups, Wake Forest fans can expect a slightly different offensive spread from last season, but the tenets of Manning’s pace-and-space offense will still be cornerstones of the Deacons.

“That’ll probably be more shots for the guards because we’ll be playing a lot more, but we still want to get paint touches, we still want to play inside out, play fast, get fast break buckets,” Wilbekin said.

Fortunately for the Deacons, Manning has proved to be a top-notch recruiter in his tenure at Wake Forest, and brought in a class of four freshmen and one graduate transfer that should be ready to contribute early on in their college careers.

Led by 2016-17 Gatorade Florida Player of the Year Chaundee Brown, a combo guard who signed with Wake Forest as the program’s highest-ranked recruit since 2008, Wake Forest’s freshmen class should help the Deacs remain competitive in the conference and nationally.

The Demon Deacons will tip off against Queens on Nov. 3 in Winston-Salem, and begin ACC play on Dec. 30 against North Carolina.