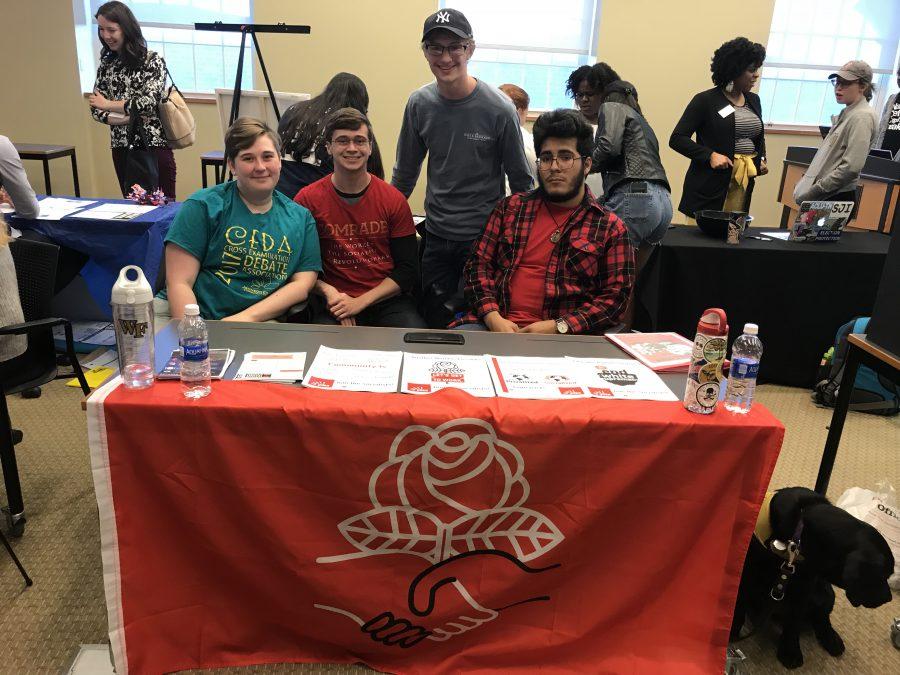 The country-wide political divisions of the past year and a half have not left the Wake Forest campus alone.

Two nationwide political groups with opposing worldviews — Young Democratic Socialists of America and Turning Point USA — both have active chapters on the Wake Forest campus. Both have been working this semester to convey their ideological messages and to encourage broader and more inclusive political discussions at Wake Forest and on a larger scale.

The Wake Forest chapter of Young Democratic Socialists of America (YDSA), founded by sophomore Rance Orrell, is one of the student groups comprising the left side of the ideological spectrum.

Orrell became interested in starting a chapter last year and the group became active this fall. While the group’s mission includes educating the campus about socialism, Orrell also felt that it could provide a social justice activism space that the campus climate had been missing.

“There were a lot of really good social justice groups on campus, but there was a disconnect between them,” Orrell said. “Students from different communities would come out for different events, but there wasn’t much solidarity.”

He believed that a socialist message and socialist-oriented activism could provide a rallying point for a wide variety of marginalized groups.

“Capitalism isn’t beneficial for anyone but the extremely wealthy, so if you are a marginalized group, you are being negatively affected by capitalist institutions,” he said.

While the nascent YDSA chapter intends to hold a general education campaign to correct many misconceptions about socialism, Orrell’s focus is on community work and tangible outcomes.

“The best way to get people into socialism is by doing things that are socialist in nature,” he said. “You want to help the community, not just hang up signs.”

Some of the initiatives that the group has discussed taking an active role in include lobbying the campus to sign on to the Paris Climate Accords, fighting changes to the Code of Conduct that could potentially silence marginalized voices, and finding ways to advocate for better working conditions and living wages for Aramark employees.

In addition, the Winston-Salem branch of Democratic Socialists of America has discussed training members to fix car tail lights for free, and if that happens, Orrell said that the YDSA chapter would be interested in participating. Broken tail lights are a common reason why drivers are pulled over, which can often lead to dangerous situations for people of color and undocumented individuals.

Finally, while the YDSA chapter’s authority to endorse political candidates may be limited, the group is interested in helping Democrat Jenny Marshall’s campaign for the U.S. House of Representatives. She is currently running in a primary against Winston-Salem Councilwoman DD Adams for the seat currently held by Republican Virginia Foxx in North Carolina’s fifth district.

In contrast, the Wake Forest chapter of Turning Point USA, a non-profit political outreach organization focused on right-wing ideas, has been a source of activism for students with conservative worldviews. Its mission is to “identify, educate, train and organize students to promote the principles of freedom, free markets and limited government.”

Sophomore Jordan Lancaster, who is now the campus coordinator for the Wake Forest chapter, said that she became involved with Turning Point because it provided her with a community of people with similar ideologies that she hadn’t found at Wake Forest before.

“Although having your views challenged is extremely important in college — I definitely have them challenged a lot — it’s also great to find a group of people who are passionate about the same ideologies as you are,” she said. “Turning Point is unique in that it focuses on young people, particularly those in high school and college. Often times, college campuses can become ideological echo chambers for one side, and challenging the dogma can be difficult, especially since conservative ideas can be met with hostility. Turning Point provides important dialogue and challenges ideas that often aren’t questioned at all on campus.”

Sophomore Phillip Yurchenko, the founder and president of the Wake Forest chapter, emphasized the group’s dedication to free speech.

“We strongly believe that everyone needs to have an uncensored voice on campus,” he said. “One of our most popular events relating to free speech is our annual free speech ball where we get a huge beach ball (nine feet in diameter) [on which] the Wake Forest community can write whatever they want.”

“College Republicans and College Democrats never talked to each other,” he said. “Before TPUSA came to Wake Forest, engaging across difference was missing. At our weekly meetings, we encourage students from all over the political spectrum to attend and share their perspective on issues.”