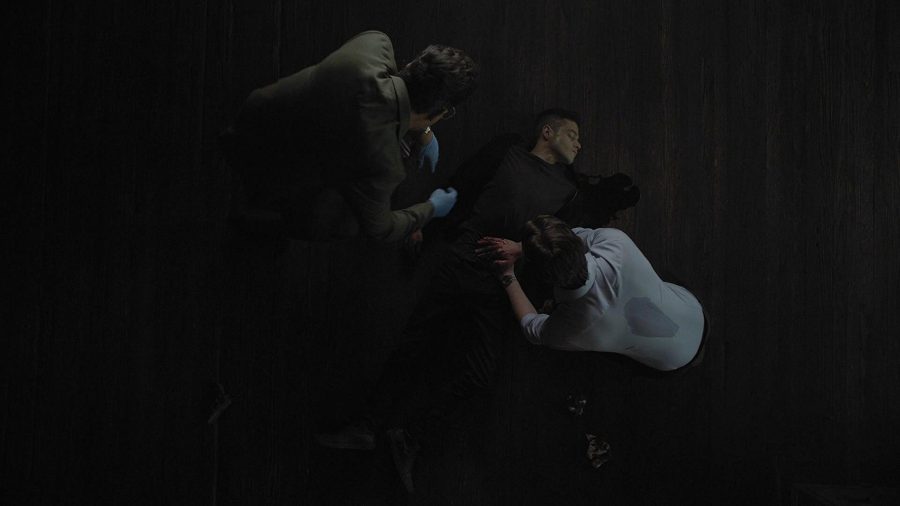 The entirety of New York City (NYC) is still experiencing the blackout that Mr. Robot, Elliot’s dual personality, created when he and Tyrell Wellicks corrupted E Corp’s, also known as “Evil Corp,” entire data bank and Elliot, who was surprisingly shot by Tyrell in the season two finale, has been in a coma for over a week. Despite the literal darkness of the premiere, Creator Sam Esmail quickly moved the plot into action and finished answering a lot of the questions introduced during season two.

One of the most significant things we learn more about is Angela’s role in Stage two, the plan to blow up E Corp’s data bank in NYC. Specifically, she is working with Mr. Robot and Tyrell to keep the plan in motion and to stop Elliot from compromising it, all under the guise of avenging her mother’s death that occurred while working for E Corp.

Interestingly, the viewers learn more about Angela, and eventually other characters, through her relationship with Mr. Robot, not Elliot. This is a captivating distinction that shows the ever progressing nature of Mr. Robot’s character. During the first season, he only interacted with Elliot. Now, Mr. Robot is a known entity among Elliot’s “companions,” and they seek him out specifically.

With Mr. Robot finally being a completely separate entity in the real world, Elliot is given a false sense of power to try and stop stage two from happening. This is one of the most enthralling, and stressful, aspects of being a viewer: watching Elliot and Mr. Robot grapple with the darkness of not knowing what is happening when the other personality has control.

Season three’s premiere also delivered on other trademark aspects of the show, such as social commentary and artistic cinematography. One of my favorite scenes blended both of these elements. As Elliot walked the streets of NYC, he proclaimed E Corp and capitalism a necessary evil to keep society from falling to shambles. Juxtaposed with snapshots of protest, anarchy and the subtle inclusion of President Trump’s inauguration, Elliot blamed himself for letting society fall to pieces.

Filled with new characters, a pressing conflict and palpable emotion, Mr. Robot’s premiere episode set the stage for the rest of the season.