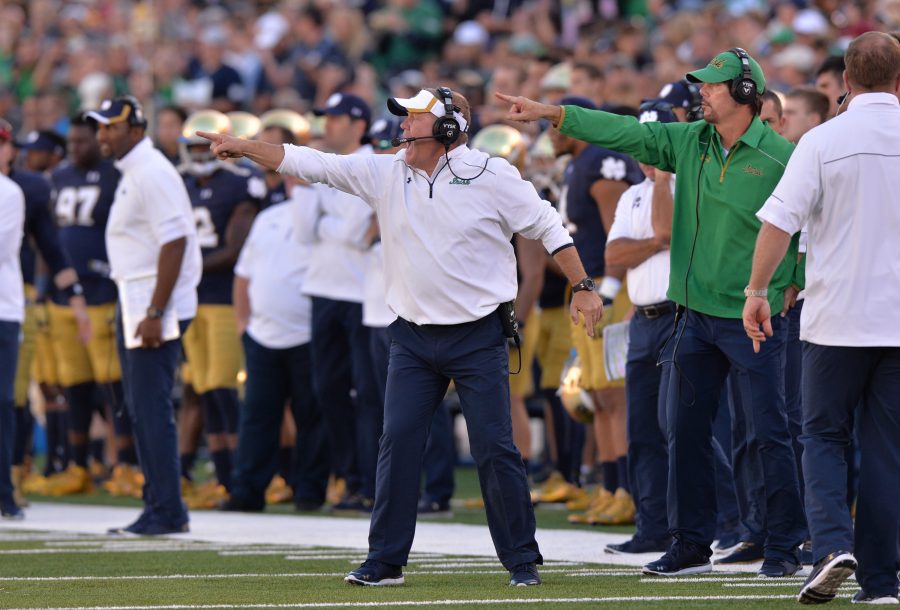 Before Saturday’s game at Notre Dame we caught up with Joe Wirth, editor for The Otter Room to learn more about the Deacs’ matchup with the Fighting Irish.

KYLE TATICH: Notre Dame has played some its best football of the season in the last two weeks, dominating the talented USC and N.C. State opponents. What has made the Irish so effective this season, especially in recent weeks?

JOE WIRTH: Notre Dame is simply beating teams up physically and that all starts with the offensive line. Josh Adams is beginning to get national accolades and he deserves praise, but the Irish offensive line is the best in the country. The Notre Dame left side, Mike McGlinchey and Quenton Nelson, will both be first round picks and the young right side has exceeded expectations this season. USC’s defensive line was injury-riddled and young, so ND was able to take full advantage.

N.C. State, on the other hand, represented a much tougher test. With Bradley Chubb and a big athletic front four, the Wolfpack represented the toughest defense the Irish faced since Georgia, as they were the No. 6 rushing defense in the country. The Wolfpack defensive line had some wins early in the game, but the Irish were able to wear them down and finish the game with 318 yards rushing.

KT: Brandon Wimbush has seemingly taken what was Deshone Kizer’s offense and made it his own. Has his success surprised Notre Dame fans?

JW: His success is not surprising, but the method in which he is succeeding is surprising. Two years ago when Notre Dame had Malik Zaire and DeShone Kizer, many felt that Wimbush had more talent than either of them, but he just needed experience and fine-tuning. His passing numbers are below what anyone thought, but has the ability to make up for any weaknesses in the passing game with his running ability. Wimbush was billed as a strong, accurate passer, but that has only began to manifest itself in the last two weeks. Wimbush has made tremendous strides since September and a lot of the credit for that development goes to offensive coordinator Chip Long and Brian Kelly for designing gameplans to accentuate his strengths and mask his weaknesses.

If the Irish are in obvious passing downs, Wimbush still struggles a bit, but the N.C. State game was by far his best passing performance, and its easy to see his maturation. He now throws with conviction and anticipation as opposed to waiting for a receiver to be open before he delivers the ball.

KT: How has the Notre Dame defense changed since Mike Elko? Who do you think has an advantage: Elko knowing Wake Forest personnel or Wake Forest knowing Elko’s scheme?

JW: Notre Dame had one of the worst defenses in the country through the first half of last season and it resulted in the firing of defensive coordinator Brian Van Gorder. The issue with the Irish wasn’t talent, it was scheme. Van Gorder’s defense was out of an NFL playbook and was very complex. Instead of playing fast, Irish defenders overthought their assignments. Elko has this team paying with the perfect balance of aggressiveness and fundamentals. The defense already has more turnovers and sacks from a year ago and they are No. 1 in the country with allowing just one rushing touchdown on the season. The Irish are also the only defense in the country to now allow a team to score more than 20 points.

I think Elko would have a slight advantage. I am sure Clawson knows Elko’s schemes well, so there will be adjustments made, but at the end of the day Notre Dame’s athletes should be able to overcome any schematic knowledge Wake Forest has.

KT: In 2015 Wake Forest arguably outplayed the No. 4 Fighting Irish with 23 first downs to 15 for Notre Dame, 340 yards to 282 yards in total offense and had the ball for nearly 12 more minutes. What do you remember about this game and were you surprised by how Wake Forest played? Is there anything of value to take away from that game as we look to Saturday’s contest or are these completely different teams?

JW: That game is the main reason Mike Elko is the Notre Dame defensive coordinator. Brian Kelly had mentioned that game made a distinct impression with him and he appreciated how Elko was able to use his resources to contain a Notre Dame offense. The main memory most Notre Dame fans have of that game is Josh Adams’ stiff arm on his 98-yard touchdown run — the longest in Notre Dame Stadium history. My memory is how Wake Forest’s defense was able to make the game ugly and really contain Notre Dame’s offensive firepower.

KT: If the season were to end today, has Notre Dame done enough to earn a spot in the College Football Playoff?

JW: I believe so. In 2015, the last time the Irish were in the National Championship mix, ND was touting their “good loss” to Clemson as opposed to this year where there are good wins in dominant fashion. With wins over Michigan State, USC and N.C. State, the Irish have three wins over current top-25 teams by at least 20 points — no other one-loss team can say that.

Notre Dame’s main one-loss competitors seem to be Ohio State, Oklahoma and Clemson. The Buckeyes have a good win over Penn State, but nothing else that comes close to a quality win. Clemson has quality wins over Virginia Tech and Auburn, but their win vs. Louisville looks weaker and weaker and even if Kelly Bryant was not at 100 percent, there’s no way Clemson should every lose to Syracuse. Oklahoma had a big win at Ohio State, but their defense has looked shaky in recent weeks and the Big XII may cannibalize itself over the next few weeks.

Attrition will take a toll and knock teams off over the next few weeks, but as of now ND should be in the top-four and with two top-20 teams still left on the schedule, they still have opportunities to bolster their resume.

KT: What is different about this Notre Dame team than the one Wake Forest saw in 2015?

JW: On offense, there is a larger dedication to the run game. The offensive line is great and behind Josh Adams, the Irish have three running backs who are all capable of going for 100. On defense, they are less likely to give up a big play and they have playmakers who can turn teams over.

Throughout the team, there is a physicality that was missing in 2015. This team also does a great job of avoiding turnovers and penalties — they don’t beat themselves. Without a doubt, 2015 had more talent, but this is a better team.

KT: Wake Forest will win if these three things happen…

JW: After two big wins at home for Notre Dame, Wake Forest will win if they catch the Irish in a letdown situation and jump on them early. The Irish passing game is limited, so if the Demon Deacons can force the ND offense to play from behind, the Irish could be in trouble.

Notre Dame has also been suspect in special teams. They had a blocked punt last week and gave up a big kickoff return, so if Wake Forest can get a score on special teams, they will have a chance a pulling the upset.

For Wake Forest to win, they have to win the turnover battle. The Irish have not committed a turnover since Oct. 6 and if the Demon Deacons can force ND into mistakes and limit their own, it will be tight in the fourth quarter.

KT: Notre Dame will win if these three things happen…

JW: The Irish will win if they continue what they have been doing for the last six games — mauling people up front, limiting mistakes (penalties and turnovers), and playing sound defense.

KT: What are Notre Dame’s greatest strengths and weaknesses?

JW: Notre Dame’s greatest strength is the run game. They are averaging about 320 yards per game and they are stubborn with it. If they aren’t getting yards early, they aren’t discouraged like they were in past years. There is a confidence that over time, ND’s physical offensive line will win out.

KT: I mentioned that I consider this to be a potential trap game for the Irish with games against Miami and Stanford still on the schedule. How do you respond to that claim?

JW: I don’t disagree with that. A lot of folks thought the N.C. State game was a letdown possibility, but the Irish weren’t going to take a top-15 team lightly. This week’s game fits the letdown model perfectly. There won’t be the same type of buzz in the stadium and its an opponent the Irish have mostly had their way with.

Brian Kelly has really beat home that ND has been in playoff mode since the UGA game- so the mantra this week is that this game is just as important as the USC game. The Irish handled getting patted on the back well last week, so let’s see if they can do it again.

KT: Give me a prediction.

I think Wake Forest will score their fair share of points, but with the progressions Wimbush has made and with Kevin Stepherson emerging as a deep threat, the Irish are becoming more balanced offensively and increasingly harder to defend.

I see a close game at half, with the Irish offense pulling away in the second en route to a 35-20 win.