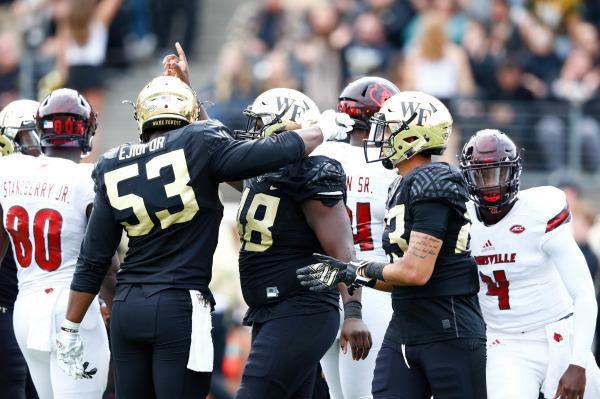 The Demon Deacons walked all over the Louisville Cardinals defense on Saturday, putting up over 600 yards of offense for a 42-32 win.

Yet these two teams have history. This was the first time Wake Forest has beaten Louisville since the latter joined the ACC in 2014 and the first time the two teams met since last year’s “Wakey Leaks” scandal where the Deacons’ game plan was found in Louisville’s hands.

Several times this season, including against Florida State and Georgia Tech, Dave Clawson’s team has gotten off to a hot start before losing the game after a slow second half. However, the Deacs were able to keep up their performance throughout the game to bring home the win.

“I thought our kids were ready to go today,” Clawson said. “We never took our foot off the gas. We played with tempo, and I think we play best when we play that way.”

Senior quarterback John Wolford had a great day, completing 28 out of 34 passes for 461 yards and five touchdown passes. Four of those touchdown passes went to redshirt freshman Greg Dortch who broke the previous school record of three touchdown receptions in a single game. However, Dortch will not catch another touchdown pass this season.

On Sunday, the university announced that Dortch received surgery for an abdominal injury and will miss the rest of the season. “Receivers were getting open, we were aggressive, they had trouble getting set when we were playing up tempo,” Wolford said after the game. “That creates some leverage here and there. When guys go up and make plays, that makes me look good.”

The Wake Forest running game started slowly with only six rushing yards in the first quarter; but, it picked up later in the game, accumulating 164 yards by the end. Junior Matt Colburn II accounted for 134 of the yards.

Colburn came in clutch for the Demon Deacons after both sophomore Cade Carney and redshirt freshman Arkeem Byrd exited with injuries.

“I just prayed to God to keep me healthy, keep everyone healthy and keep everyone safe from injury, because if I went down, they’d probably put [redshirt sophomore Kendall Hinton] back there,” Colburn said. “I just rose to the challenge and made it full-speed, and I knew I had guys out there that I trust.”

Although not evident from the final score, the Wake Forest defense had a good day, as well, apart from two last minute touchdowns allowed in the final 1:10 of the game. The Wake Forest defense earned seven sacks, 2.5 of which were credited to redshirt sophomore linebacker Justin Strnad. Strnad complemented those 2.5 sacks with 2.5 tackles for a loss, as well. In addition, the secondary did well containing the pass, holding Louisville’s junior quarterback, Lamar Jackson, to passes under 26-yards.

Wake Forest will have to continue and build on Saturday’s performance in a tough matchup next week at No. 3 Notre Dame.

“We were finally able to finish a game off right,” Wolford said. “We’re going to celebrate for 24 hours, and then, we have a tough challenge next week.”