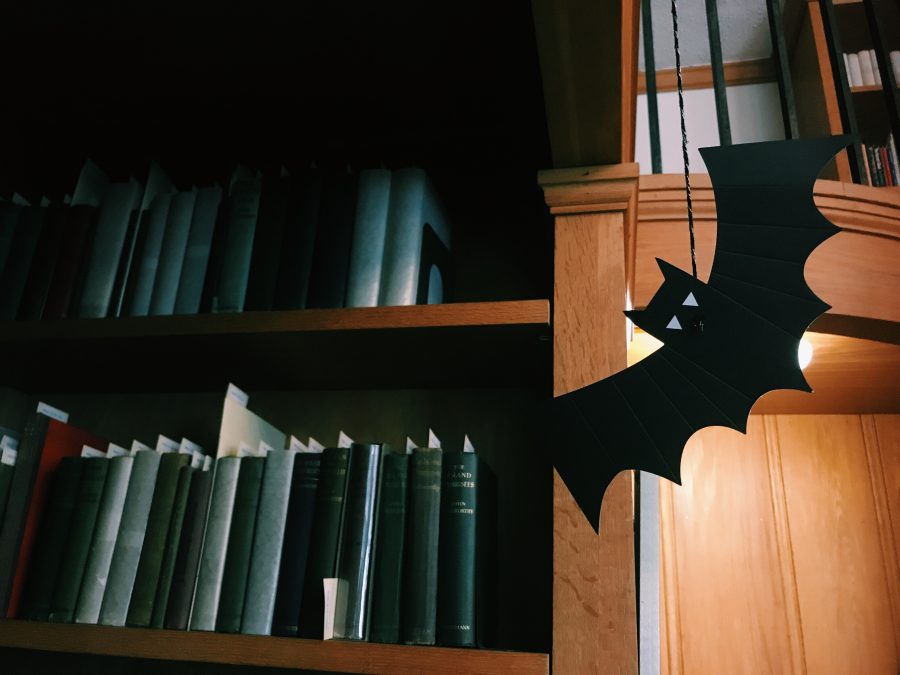 For its second annual “Spooky Night,” the Archives held an open ghost story reading in its sixth floor library room.

Dean of ZSR Library Tim Pyatt began the evening with a reading from Frankenstein, not without first a bit of history, a farcical one-liner summary of the book and an apology that he would not be reading in his “Gene Wilder voice.”

Chris Burris, ZSR serials acquisitions coordinator, conquered Edgar Allen Poe’s The Raven, noting one of his favorite renditions of the poem as the Simpsons’ “Treehouse of Horror” episode in which James Earl Jones is narrator and Bart is the raven.

As soon as Burris sat in the large armchair upfront, his deep, unwavering voice filled the room.

“Bird or beast upon the sculpted bust above his chamber door,” Burris read, looking with what felt like pure impromptu at the artificial raven just past his shoulder. “With such name as ‘Nevermore.’”

ZSR Director of Technologies Thomas Dowling, whose melodious voice elicited a room-wide gasp during his “Black Cat” reading last year from even the most versed Poe readers, took a lighter approach at this “Spooky Night.”

Dowling read, “The Ghost Who Vanished by Degrees,” a part of a series of amusing ghost stories by Robertson Davies, professor and playwright.

The story centers on the ghost of a Ph.D. candidate who obliviously tortures a professor with his endless dissertations.

The floor practically shook from laughter when, not long into the reading, Dowling held up a sheet of paper with a Bible verse.

“By the way, there are three footnotes for this story,” he said in a change of tone, though no less theatric.

Listening to Dowling was like listening to an uncle emphatically share an exaggerated college tale, complete with a “Mu Kau Mu” fraternity.

Each semester, the Archives hosts events intended to highlight the department’s value.

“We try to do unique things like [“Spooky Night”] because we want people to know we’re here,” said Tanya Zanish-Belcher, director of the Archives.

Lying beside her in her office were a 300-year-old piece of African pottery and a scroll signed by the classmates of injured Vietnam War veteran Andy Heck (‘70).

The Archives has countless artifacts and several first-edition books, including one of Zanish-Belcher’s favorites, Walt Whitman’s Leaves of Grass.

“I’m pretty sure he did the original printing himself, so just thinking about picking up something he touched is pretty cool,” she said.

The Archives is open to students, faculty and the public.

The department encourages students to use its materials, which are becoming increasingly digitized, for class research and to take its classes.

“Compared to other libraries I’ve worked at, the Archives is very impressive in terms of how hands-on scholars and students can be,” Dowling said. “You can walk in and ask to use something and you can.”

The next event that will be hosted by the library will be “Collecting the Controversial,” by Rebecca Schulte, on Nov. 16 in ZSR Room 624.