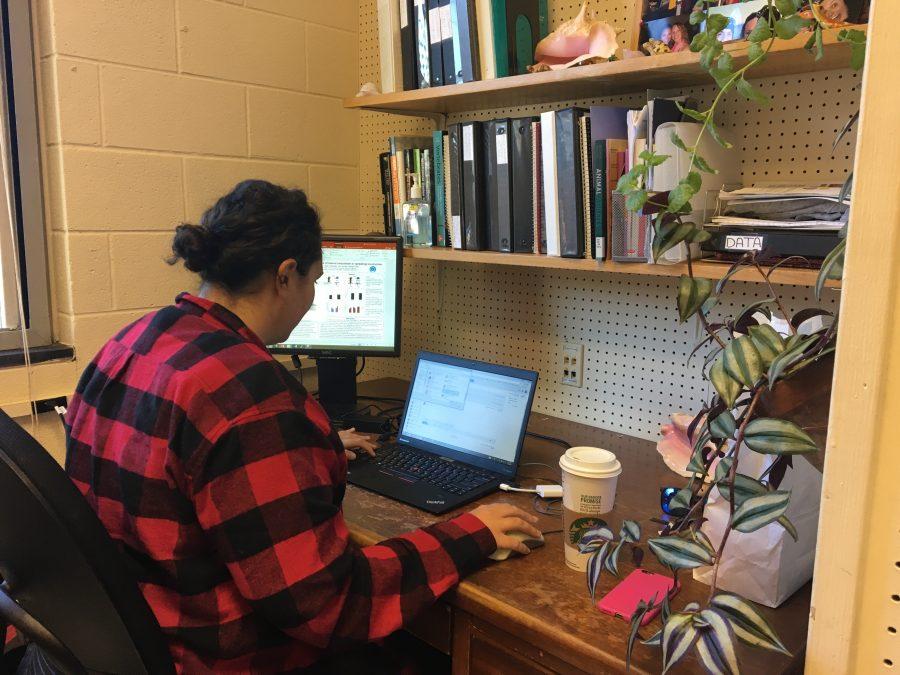 Below the calm surface of the Everglades, a water snake darts after a small-body fish known as the mangrove rivulus.  Gaining on the fish, the water snake starts to open its mouth, preparing to savor its dinner.

Just as the water snake is about to take a bite, the fish launches itself out of the water, landing safely on land, barely avoiding its fate as fish food.

In Professor Miriam Ashley-Ross’ lab, biology students are interested in animal behavior, and one behavior they are studying is how small-body fish, such as the mangrove rivulus, muster the ability to catapult themselves out of the water.

“The way that [small-body fish] move is using this tail flip behavior,” said Ashley-Ross.  “They will curl up their body, head passing over the tail, and then they launch off of the tail into a ballistic flight that can carry them many body lengths.  It’s pretty neat.”

One of Ashley-Ross’ former graduate students, Ben Perlman, determined that the tail flip movement is caused by a change in a motor program that small-body fish use when trying to escape predators. Now graduate student Noah Bressman is taking Perlman’s research a step further by studying how the fish know where to go after they hit land, according to Ashley-Ross.

Tucked behind Salem Hall, research projects happening in Winston Hall, such as Ashley-Ross’ animal behavior studies are isolated from the rest of campus, according to senior biology major Emily Miller, who is helping conduct research on salamander’s spinal movement in Ashley-Ross’ lab.

Other biology students working on research projects are also aware of this disconnect. According to senior biology major Lexie Wang, the majority of Wake Forest students are unaware of the research happening behind the walls of Winston Hall.

“[Researchers] could work day in and day out, but that doesn’t mean anything if you don’t present [your research] to people and tell them what you’re doing or why you’re doing it,” said graduate student Fadi Marayati.

While many biology professors publish their research in scientific journals, the department is trying to better share its findings with the Wake Forest community in a general context that is more accessible for the average person to understand.

One way the department presents its work is by participating in the annual Undergraduate Research Day. Hosted over Parent’s Weekend, the fair offers the opportunity for undergraduate students in any field to present their research to faculty, staff, parents and peers.

Last year, 17 biology majors presented their research. This year, 20 were signed up to present their projects at the Undergraduate Research Day on Oct. 27.

The Biology Department also hosts its own research fair at the end of each academic year to showcase honors biology students’ research, according to Ashley-Ross. Similar to the Undergraduate Research Fair, the Biology Department’s Research Forum is advertised across campus and welcomes the entire Wake Forest community to learn about the different projects students have been working on throughout the school year.

“I think all the research fairs create a way for students to get closer to research,” Wang said. “[Students] can become aware of the fact that biology is very close to our life and can also be very interesting.”

Due to the wide variety of research projects happening within the Biology Department, “[faculty and students] interact a lot with our own international and national research communities,” said Professor Susan Fahrbach, chair of the biology department.  For example, Ashley-Ross and her students have attended and presented at the annual meeting of the Society for Integrative and Comparative Biology.

Christine Vega, one of Ashley-Ross’ graduate students, has attended the conference four times to present her research.  One project Vega discussed at the meeting was her study on spinal movement in salamanders.

Vega is essentially trying to turn a salamander into a turtle by placing shells made of either PVC piping or tycoon tubing on the salamanders to restrict their spinal movement, according to Ashley-Ross.

“For Finding Nemo and Finding Dory, they usually had a fish biologist look at the animations to see if the animals were moving in accordance to how they actually move in nature,” Vega said.

The department has also been connecting with both the Wake Forest community and the national and international communities by creating an active social media presence.  Fahrbach tries to post one or two things a day on the department’s Facebook page and has done a good job in recent years keeping the site updated on both graduate and undergraduate biology research, according to Vega.

Some professors, such as Ashley-Ross have their own lab websites where they not only describe their findings but provide visual aids to exhibit their work.  Ashley-Ross’ lab site includes animated GIFs of fish jumping and lab videos on both land and underwater movements in fish.

“[Scientists] publish in scientific journals but it’s also important to explain your research in a more basic context to make sure your work can relate to a more general audience,” Vega said.