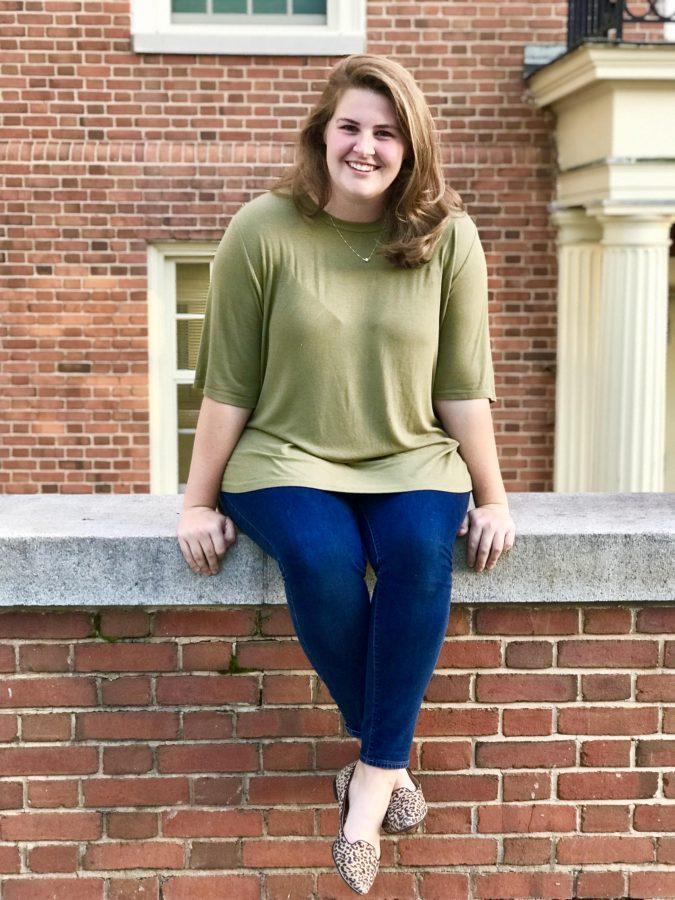 Recently, Campus Grounds was packed with people who crowded in to see sophomore Lucy Porter perform her stand-up comedy show, Lucy Porter: Is Trying Her Best.

The Old Gold & Black sat down with Lucy to discuss her opinions on comedy.

When did you get started in comedy?

When I was five, I started doing regional theater. Adults get really upset with children running all over the place, so they would have us do improvisation games to keep us distracted. So, subconsciously I started doing improv. It was more fun for me. It was just structured make-believe, and then I had the realization of “Oh, this is something that I could do for the rest of my life.” That morphed into improv; my roots are in improv and I started doing stand up last year and loved it.

As much as I want to, I won’t ask you to tell me a joke. That seems very cliche. Do you get that a lot?

Yeah (laughs). I label myself as a comedian and there’s this expectation to always be funny and always have a joke at hand. Humor’s very much ingrained into who I am, but I can also be sincere. I have all my jokes written down on postcards on this bulletin board in my room so I can organize it and get ready for shows. People will come in my room and ask “What’s that one?” I’ll sit there and do my whole set while we’re just hanging out, but like guys, I need to have normal conversations.

So you’re a bit of a campus celebrity. I’ve definitely seen you on the Wake Forest snapchat story last year. What else are you involved in?

(Laughs) Oh my god, campus celebrity. I started running the snapchat because of Wake the Vote. I’m a Deacon Camp leader. I’m a graphic designer for MRKT, the student marketing group at Benson. I’m a member of Kappa Delta and from that I lead the Confidence Coalition, the group who put all the little rocks and green balloons around campus. I just started a video-based sketch group called Double Entendre, a new comedy group coming to campus.

Your recent show was a huge success. You had a huge audience and there was a lot of laughter. Do you hope to do more comedy on campus or locally?

Oh, yeah. I do the bulk of my performance in Greensboro, because Winston-Salem doesn’t have a huge comedy community — it’s very much developing. This was definitely a really good step forward to do my first show on campus. We’re hoping to develop an on-campus open-mic monthly, so more people can try comedy. Student Union does an open-mic every semester, but we’re looking into doing a comedy-specific open-mic more regularly.

Define funny for me.

I think at the root of all humor is truth. A lot of my comedy is identifying absurdities in the commonalities of life, just pointing out the truth behind things, not in like an investigative way. There’s also the unexpected element to comedy. If you lead somebody one way in a joke in a set-up and end up going in a complete opposite direction, I think that’s one of the funniest things. Sarah Silverman has this incredible bit where it starts and it’s very sincere and she leads you to believe her sister was raped in college. The punchline was really that she shit her pants. It’s the most brilliant, funniest thing. I’m obsessed with it.

Have you ever had a joke, bit, or segment that you thought was hilarious but bombed?

All. The. Time. All the time. A segment in my show is where I get suggestions from the audience and try to do stand-up based on those premises. When I practiced with my friends, it often times turned into what I call ‘Puberty Seinfeld.’ It’s just my bad impression of Seinfeld that sounds like he’s going through puberty. A suggestion could be “wiener dogs,” and I’ll be like (impersonating Jerry Seinfeld) “What’s the deal with wiener dogs?” And it just never plays out, I could never do it on stage, but I think it’s the funniest thing.

Speaking of Seinfeld, do you have any comedy idols? Maybe he’s not one of them — Seinfeld is not for everyone. Or are there any qualities that comedians have that you aspire to?

I love her. Brooklyn Nine-Nine is a great show.

(Eyes widening with joy) Yes! It’s so smart. I really admire smart humor and there’s this Lorne Michaels quote, I’m gonna butcher it, I don’t know the exact quote, it’s something along the lines of, “we only pursue the highest form of a joke.” Like Dick in a Box is the highest form of a dick joke that you can get and that’s why it works. I have so much admiration and respect for smart comedy because it’s so difficult. But yeah, Chelsea Peretti, John Mulaney, Pete Holmes.

Pitch your recent comedy show to me in 30 seconds or less.

How about an idea for a future comedy show?

I really want to look more into vulnerability and confidence and how it’s all related. A lot of my stuff is drawn from life experiences and that’s how I write, but I have yet to really delve into my own vulnerability and find humor in my own self, my own being.

A lot of comedians draw from their everyday lives. What are your favorite experiences to talk about? Least favorite?

I do a lot of stand-up in Greensboro and I’m one of the only women who regularly goes plus I’m one of the only one under 25. I’m in a unique sector, which puts me in a really good position for comedy. I’ll go up and my opener will be, “We’ve officially reached the point of the night where they’ve let the white girl tell jokes.” That’s a good opener. It’s a lot of, “Let me tell you about how absurd it is and how weird it is to be young right now and to be a young white girl.” I do a joke about my sorority, and I do jokes about the apps on my phone that send me news and different things in my own experience that are just so normal yet bizarre.

A lot of those things seem very typical and at the same time, being a young, white girl gets a bad rep.

Yes! Oh my god, all the time. I try to be very cognizant of that while doing comedy because I’m not trying to go up there and be like (impersonating a stereotypical spoiled, rich girl), “I’m Lucy Porter and blah blah blah.” My worst sets are when I get into that mindset and I’m very stereotypical. I think my job is almost to break that and be like, “This is what you thought but this is what’s real.” It goes back to that truth.

How much of your show do you have planned out in your head when you get up on stage? Do you ever overthink a joke to where it stops being funny?

I write out all my jokes ahead of time. I put ideas in my phone when I think of them. I have my material written and planned out with transitions and what order I want things to go in. As for overthinking, there is truth in that. I try to practice my jokes enough that it feels kind of natural so I’m not racking through my brain. I do try to keep it natural and in that element of “I do write my jokes ahead of time but if there’s something going on in the audience or in the environment, let’s talk about it.”

You have to be very on your toes.

Yes! That’s the thing about comedy. The audience wants it to feel like a natural conversation. They want to be a part of it, and they are so much a part of it. It’s a dual relationship between the performer and audience. At the same time it’s the weird thing of “I have all this written out and you know I have it all written out but we’re gonna pretend like I don’t. We’re gonna pretend it’s all on the fly.” That’s why I really like the improv element of my show because it’s something different that we all know is new and will never exist again.

Would you get up on stage with nothing prepared?

(Reluctantly) I would. (Laughs) I wouldn’t be eager to. Having my improv background would be very beneficial in that scenario. In that case, I would almost be tempted to sit on the stage and talk to people in the audience.

Is laughter the best medicine?

(Laughs and shrugs her shoulders) Maybe? I don’t know; I think Tylenol’s great.

Would you rather have only one of your bits in a show make people really laugh — like crying, can’t breath laugh — or have people smile but not laugh at your entire show?

I would prefer to have one joke really work. I benefit so much from audience feedback. Not having people come up to me after the show saying, “If you change this wording…” but like indirect audience feedback, like energy I’m getting. Having one joke work really well, I can then go back and ask, “Oh okay, what about it made it work? What about the other things didn’t work? How can I incorporate the good to make the bad better?” That’s so much more helpful than a mediocre set. Then you know the audience is paying attention and they’re invested, which is something incredible.

Yeah, being in an environment growing up where I was encouraged to play and explore and make believe really encouraged my imagination and my sense of humor.

Do you prefer watching comedy or reading comedy?

I like watching because I’m in the mindset now where I get nit-picky while I’m watching other people’s comedy. I’m like, “Why did they make that choice? Why did they move their hands there?” I think the theatricality behind it all is so fascinating, so I prefer watching it.

Is comedy going to be a part of your future?

God, I hope so. I really love it. It’s what genuinely makes me happy. If I can spend the rest of my life making other people happy in whatever capacity, I will have won.