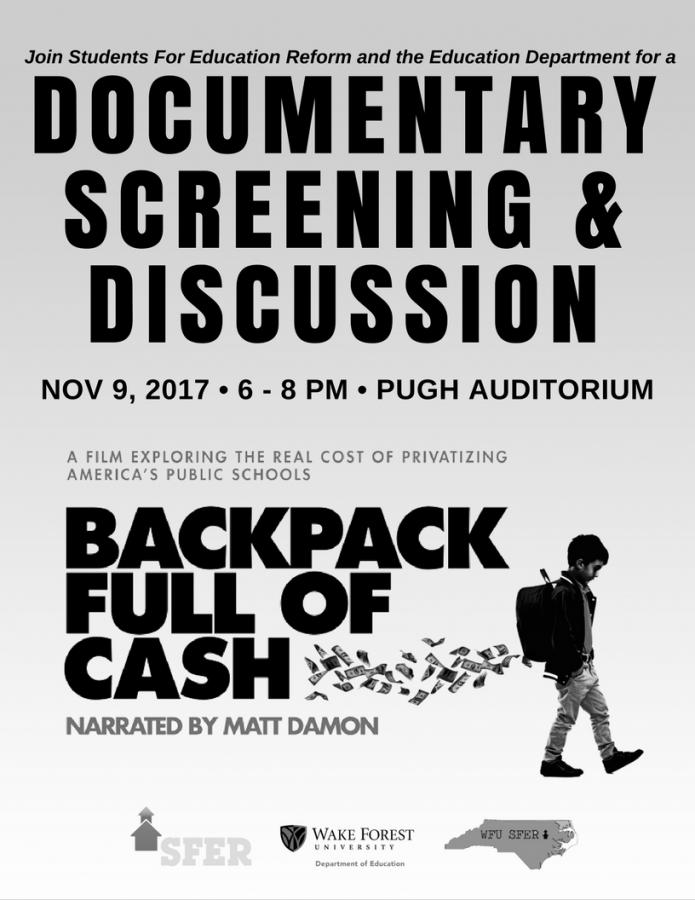 Winston-Salem and Forsyth County is the fifth largest school system in North Carolina, according to the Department of Education.

To shed light on the surrounding public school system and issues associated with it, Students for Education Reform (SFER) will be showing the documentary Backpack Full of Cash tonight, Nov. 9, from 6 to 8 p.m. in Pugh Auditorium.

Narrated by Matt Damon, the film explores how the privatization of schooling is causing budgets to be cut in public school systems and creating an adverse effect for children in poverty. According to the film’s website, the goal is to “build a case for public education as a basic civil right.” This falls in line with the mission of SFER, according to communications director Caroline Li.

“The idea behind SFER is creating a grassroots organization for people to push for equality in education,” Li said. “There are a lot of things going on in the nation right now that greatly affect public schools and private schools, and so we are kind of surrounding these issues and trying to provide advocacy and [create] policy change.”

The film specifically focuses on issues with the public and private school dichotomy in cities such as Philadelphia, while also showing how a “well-resourced public school system” can be successful in places such as Union City, New Jersey.  It also discusses how charter schools factor into the equation, often causing more issues when it comes to providing quality public education.

“It’s very interesting because this documentary was made before Betsy Devos was selected as the Secretary of Education for the U.S,” Li said. “So, this was made before the issue became really forefront in the public mind and so it kind of provides an interesting perspective on that, and is very relevant for today.”

Created by Sarah Mondale and Vera Aronow, the documentary has been an official selection at various film festivals, including the 2017 Seattle International Film Festival. Mondale herself is a former public school teacher, who quit to create the film after producing a PBS Series titled School. This project explored the history of public education in America. In her Director’s Statement, she discusses how she was inspired to push against the film Waiting for Superman, which discusses the idea that only the private sector can remedy issues with education.

“Last semester, we showed Waiting for Superman” Li said. “So, that was kind of looking at alternatives to public schools, such as charter schools, as they way to save education. And so, this film that we are bringing this semester is kind of in dialogue with that and is looking at the same issue but providing a different perspective,” Li said.

Following the film, representatives of SFER will facilitate a discussion about the implications of the film and ways to further get involved with the organization.