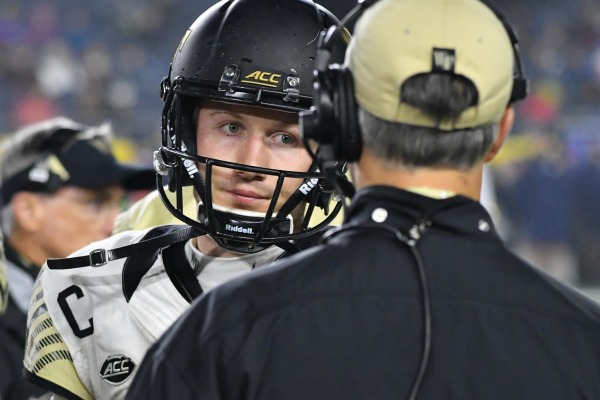 This past weekend, the Demon Deacons traveled to South Bend, IN to take on the number three team in the country, the Notre Dame Fighting Irish.

The Irish have been one of the biggest surprises in college football this year, behind an elite running game and an extremely stout defense. Heading into the game the Deacs were 14 point underdogs to the Irish; however, this very much felt like a game the Deacs could compete in at full strength.

Unfortunately, stud wide receiver Greg Dortch, defensive back Jessie Bates, the defensive anchor, and top running backs Cade Carney and Arkeem Byrd were not available due to injury. It’s hard not to wonder if the outcome of the game would have been different had these three been able to play. As a result the Deacs fell by the final score of 48-37.

Despite the result, there were a lot of positives to come from the game. The Deacs were the first team all season to score more than 20 points on the Irish. This was extremely impressive and really highlighted an incredible shift for the Deacs this year. For the first time in years, the Demon Deacons offense has been setting the tone for the defense. Behind the once again incredible play of quarterback John Wolford, the Deacs were able to move the ball up and down the field on the Irish. Even without three of their top offensive weapons, the offense had room to work and Wolford had time to pass in the pocket. The transformation of the offense has been absolutely incredible this season and should continue to be a force for the rest of the season.

On the other hand, the defense struggled mightily to contain the Irish. The injury to Jessie Bates certainly played a major roll, but the Deacs were incapable of containing Notre Dame quarterback Brandon Wimbush. Wimbush rushed for 110 yards on 12 carries for two touchdowns. The Deacs did a good job in coverage throughout the game, but constantly lost track of where Wimbush was in the pocket. If the Deacs had been able to limit the big plays, this game would have been a lot closer coming down the stretch.

There are no such things as moral victories, but the Deacs once again proved that they can play with any team in the country.

It would be awesome for the team to finally win one of these games, and the FSU game will continue to haunt them, but the Deacs still have a chance to have a very impressive season. Winning next week at Syracuse would make the Deacs bowl eligible for the second straight season and put them in a perfect situation to receive a bid to a great bowl game.