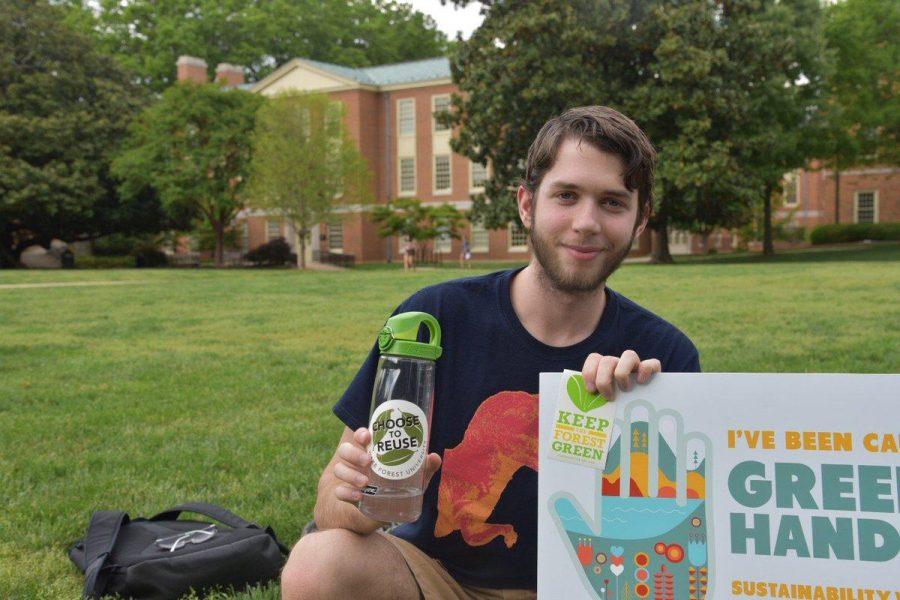 Walk through Wake Forest’s campus on any given afternoon and you’ll likely come across bikes parked outside each building, students touting reusable water bottles and any number of sustainability stickers pasted upon laptops and Nalgenes.

But take that same walk late on a Friday night and, instead, you’re treated to dozens of red Solo cups and beer cans strewn across the ground while a sprinkler waters a large section of brick instead of the grassy quad.

Wake Forest may be rife with clubs, organizations and plenty of sustainability minded groups, but it turns out that a presence doesn’t always translate into action.

“The problem is that climate change doesn’t feel like an immediate effect for most of the people on campus,” said Ellie Bruggen, a sophomore and member of Outdoor Pursuits, as well as the Sustainability Theme House. “That allows many of us to not do anything and not care.”

While the prominence of sustainability-mindedness on campus has greatly increased in the past 10 years, thanks to university-led initiatives, there remains a difficulty in changing students’ habits.

“You have a lot of the same people throughout a lot of these organizations,” Bruggen said. “Being together really helps us feed off of each other in a healthy way, but it gets tougher when you try to include less passionate people.”

Ally Hellenga, the communication and events coordinator for the Office of sustainability, spoke about students who are deeply committed. “We definitely have our dark green circle,” she said. “But now we’re trying to expand more into lighter green areas.”

Despite the widespread push to increase sustainability’s presence on the campus, the staff size of the Office of Sustainability has remained small.

“We keep ourselves small for a reason,” Hellenga said. “It helps us to make more connections with students and faculty so that we can empower them.”

“The Choose to Reuse campaign is a textbook example of how well this can work,” said Brian Cohen, program coordinator for the Office of Sustainability. “A student came to us not just with an idea, but with a well-identified issue, plenty of research and an actionable plan that took into account what students wanted.”

This tactic works well when you have a dedicated force behind the project, but it can become an issue when a movement requires input from the greater public.

This recent expansion comes through several peer networks, namely the Green Team for faculty/staff, Greeks Go Green for students involved in fraternities or sororities on campus and the Student Athlete Sustainability Network.

In each of these networks, an organization representative meets with Cohen regularly and serves as a sustainability advocate within his or her organization.

Greeks Go Green has existed since 2011, yet many members of Greek organizations, including Anuj Jailwala, a junior and member of the service fraternity Alpha Phi Omega, are less than familiar with the movement.

“I hadn’t heard of it until just this semester,” Jailwala said. “It’s a great idea, but I haven’t seen much come from it yet.”

While this may signal a failing attempt to some students on campus, the Office of Sustainability thinks that it’s a program which just needs to find itself.

“There is a more targeted approach behind the things we are doing than people may realize,” Cohen said. “Sustainability isn’t always altruistic. We’re hoping to meet people where they are, with what they value, to help reach them in other ways.”

“I think that more connectivity between efforts could really help our campus,” Bruggen said. “Being totally sustainable isn’t always practical, but I think having some oversight could help.”

“We recognize that there are opportunities to bring more independent groups in,” Cohen said. “But we aren’t here to tell people that they aren’t doing enough. That’s not our narrative. We are here to empower those who want to help.”

When asked about how students who want to make a difference could best help, Bruggen, Hellenga and Cohen all had the same answer — find a sustainable effort that you are passionate about and then spread the word to as many people as you can.

“Tell the world about it,” Bruggen said. “People can’t help a cause they don’t know about.”