NC State Interview with the Technician 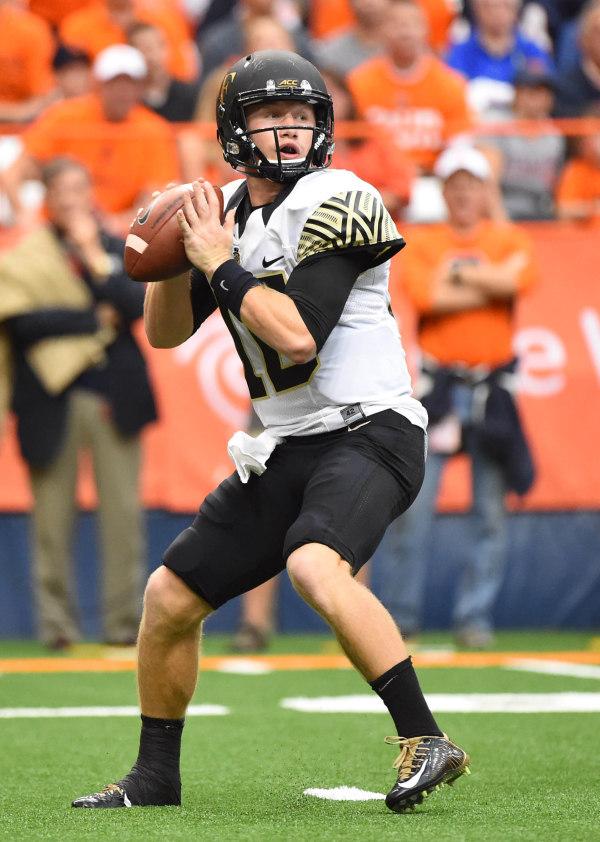 The Old Gold & Black sat down with an NC State reporter before the weekend’s game.

Kyle Tatich: NC State had a chance to take control of the ACC Atlantic Division two weeks ago when it hosted Clemson. How do you feel the Pack have responded since falling to the Tigers?

Andrew Schnittker: After dropping the heartbreaker to Clemson, NC State’s reward was a date with Boston College, a pesky team that’s always been a thorn in the Wolfpack’s side. While the game in Chestnut Hill was far from pretty, the Wolfpack got it done against a team that’s always been a thorn in its side. I think responding the way the team did, fighting through adversity and getting a win on the backs of strong performances from some of its best players in running back Nyheim Hines and defensive end Bradley Chubb should be very encouraging for Wolfpack fans.

KT: What were the expectations for NC State heading into the year? Have they been met?

AS: Expectations coming into this year were that the Pack, loaded with senior talent and coming off some close losses to top opponents last year, would compete for an ACC title. While that’s off the table, the team has had a very good season. No one can fault the Pack for losing to top-tier opponents Clemson and Notre Dame, especially given NC State’s performance against the Tigers.

The Pack picked up two signature wins against Louisville and Florida State, has been in the top-25 since week five and has a chance to win 10 games for just the third time in program history. Expectations of NC State taking a step forward as a football program this year have definitely been met, but finishing strong in these last two games and getting to the best bowl game possible is very important.

KT: What are the strengths and weaknesses for both the Wolfpack offense and defense?

AS: The offense is very balanced. A healthy Nyheim Hines brings an explosive element to the run game. Quarterback Ryan Finley has had a very strong year, and has a deep group of receivers in stud, highlight-reel catch machine Kelvin Harmon, along with Jakobi Meyers and Stephen Louis. Senior all-purpose back Jaylen Samuels can catch the ball, run the ball and even throw it on occasion. He’s a weapon, pure and simple, and can do it all.

The offense’s weakness probably still lies in its inability to connect on the deep ball down the field. That’s an area of Finley’s game that has definitely improved, but the Pack still is not a team you’re going to see airing it out on a regular basis.

The defensive pass rush, led by likely top-five NFL draft pick Bradley Chubb, is capable of making life miserable for any quarterback. NC State has four seniors on the defensive line, and all four are likely to be drafted into the NFL.

The secondary has improved as the season has gone along, but is still a weak spot. The run defense was sixth in the country going into a Week 8 loss to Notre Dame, but has since allowed 200+ rushing yards against in three consecutive games, with at least one home run touchdown run. The Pack will be seeking answers in that area coming into Winston Salem Saturday.

KT: How would you assess Ryan Finley’s season to this point?

AS: Finley’s progression has been the biggest factor in my mind for the Wolfpack taking the step it has this year. Last season, he was average in terms of moving the ball, and the Pack’s chance to win two games ended with a pick in the end zone from him.

This year, Finley has had a great season. He uses his plethora of weapons, and has improved greatly on his weaknesses from last season. He has a much better deep ball, and runs a phenomenal two-minute drill. He did not throw a pick in the season’s first seven games, and has the longest active streak in the country without an interception going into the Notre Dame game. He’s thrown four picks in the last three weeks, but not all of them can be pinned directly on him, and he was probably due for some simple regression that area. Finley’s ability to lead the offense is the biggest reason NC State is 7-3 on the year.

KT: Other than Bradley Chubb, who are the most notable members of the defense?

AS: The entire starting four on defensive line are studs. Kentavius Street is an excellent pass rusher, and BJ Hill and Justin Jones are great run stoppers in the middle. NC State brings a strong linebacking corps as well. Jerod Fernandez leads the team in tackles just about every week. Airius Moore is a good pass rusher and run stopper, and Germaine Pratt has two of the biggest plays this season, a game-ending pick six against Louisville, and a punt-block touchdown against Notre Dame. In the secondary, safety Shawn Boone leads the way, and has two big interceptions this season.

KT: What is different about this NC State team than the one Wake Forest saw last year?

AS: Ryan Finley. The step forward he’s taken has, again, for my money, been the biggest factor in the Pack’s step forward as a team this year. The progression in Finley’s game has given this offense another element.

KT: Wake Forest will win if these three things happen…

AS: 1. Wolford lights up the Pack’s secondary along with Wake Forest moving the ball effectively on the ground.

2. Finley throws a pick for a fourth-straight game.

3. The kicking game continues to be atrocious.

KT: NC State will win if these three things happen…

AS: 1. Finley takes care of the football.

2. Nyheim Hines has a big game.

3. Chubb and the pass rush make life difficult for Wolford.

I think the Pack’s offense moves the ball against a banged up Wake Forest defense, and Chubb and co. get enough pressure on Wolford to slow the Deacons’ offense. Give me NC State in a barn burner, 42-35.