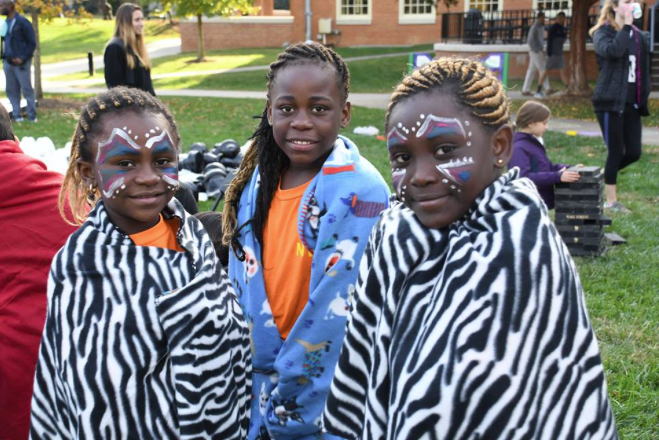 Manchester Plaza was bustling with activity on Nov. 11 as SAFAR, Wake Forest’s Student Association For the Advancement of Refugees, hosted their second annual Wake Refugee Day.

The event was free and open to all. Students, refugees, immigrants, community members and a number of professors and administrators, including Provost Rogan Kersh and Interim Chief Diversity Officer José Villalba and their families all came together to learn from one another.

Senior Rose O’Brien, SAFAR’s current president, was inspired by a World Refugee Day celebration she attended in Trieste, Italy, and started both the Wake Refugee Day tradition and SAFAR itself.

“Over 2,000 people from Italy, Afghanistan, Pakistan, Somalia, Senegal and more came together to eat food, see theater performances, dance and celebrate their respective cultures,” O’Brien said. “During the negative and anti-immigrant sentiments of the 2016 election, it was a shining light of inclusivity. I knew I wanted to bring that same feeling of love for your fellow human being back to Wake Forest.”

The theme for this  year’s event was titled “Celebrating Our Stories.”

“This year was about ‘Celebrating our Stories’ because we really wanted to raise awareness about amazing individuals at Wake Forest and in Winston-Salem,” said senior Amanda Rosensky, SAFAR’s special events coordinator. “We wanted the day to be a community gathering where we could read and learn from the stories of various individuals, but also learn from the people we were sharing food and playing soccer with.”

Across the front of the quad, on either side of the buffet tables and stage, easels were set up with posters that each featured the story and photo of a different refugee or immigrant, including Politics and International Affairs Professor Betina Cutaia Wilkinson, who is from Buenos Aires, Argentina, author and scholar Kirt Gonzalez who is from Trinidad and now works in the ZSR Starbucks, and junior Ravdeep Mathone, who is from Punjab, India and lived in Germany before immigrating to the U.S., and who now serves as the community and off-campus coordinator for SAFAR. Mathone’s story was shared in the form of a poem describing the way she’s formed her identity through all the places she’s lived.

“The word ‘Safar’ means ‘journey’ in Arabic and Urdu,” said SAFAR president Juilee Shivalkar. “It is also related to the Swahili word for journey, from which we get the word ‘Safari.’ Our goals are to support local refugee populations and to raise awareness about refugees and related policies on campus.”

SAFAR works closely with World Relief Triad, the refugee resettlement agency for Winston-Salem and High Point, to coordinate friendship partners (when Wake Forest students, faculty and staff are connected with refugees in the area to provide support and help through casual, weekly meetings), homework and application help, tutoring and a weekly EFL class, led by senior Taylor Alouf, who is currently a World Relief intern and serves as SAFAR’s World Relief coordinator.

SAFAR also works closely with ECAR (Every Campus A Refuge).

“Unbeknownst to most students, there is actually a refugee family living right across from Wake’s Reynolda Campus,” Shivalkar said. “The family is hosted by the ECAR house, but SAFAR members tend to be involved with the family that resides there.”

Other refugees and immigrants who volunteered to share their stories on the posters included Beh Meh, a refugee from Burma who is a part of RISE, Farah Alsakhita, a Syrian refugee, Ojullu Diel, an Ethiopian refugee, John Mubake Ramazani, an immigrant from the Democratic Republic of Congo who co-founded the Neema Foundation, and other young Syrian refugees.

The side of the quad closest to the Pit was filled with people of all ages, sitting around tables together eating food from a variety of restaurants including Nawab Indian Cuisine, Mooney’s Mediterranean Cafe, Taste of Ethiopia, Irie Rhytms, Syrian Cuisine and Delicious by Shereen. In the background,  upbeat dance music from around the world boomed as teams of children and students grouped together to form soccer teams. Behind a long row of buffet tables, people danced together in circles on stage, holding hands and children ran around them, pretending to sing with microphones. Celebration was in the air.

There was face painting and tables were decorated with balloons, which children excitedly untied and accidentally sent flying high into the sky a number of times throughout the event.

In addition to the food and events, there were vendor tables hosting a variety of small businesses and programs. Shway Shway (Arabic for “little by little”), which is owned by a Syrian refugee, sold infant and children’s clothing and another table showing ornaments sewn by refugees learning English and entrepreneurship through YMCA Literacy and RISE (Refugee and Immigrant Society of Entrepreneurs) here in Winston-Salem were present at the event. There was also a donation box filled with warm fleece blankets for refugee families and others who needed them to use during the event and take home.

Even though it had been sunny and cold all afternoon, halfway through Wake Refugee Day, a beautiful rainbow stretched across the sky.