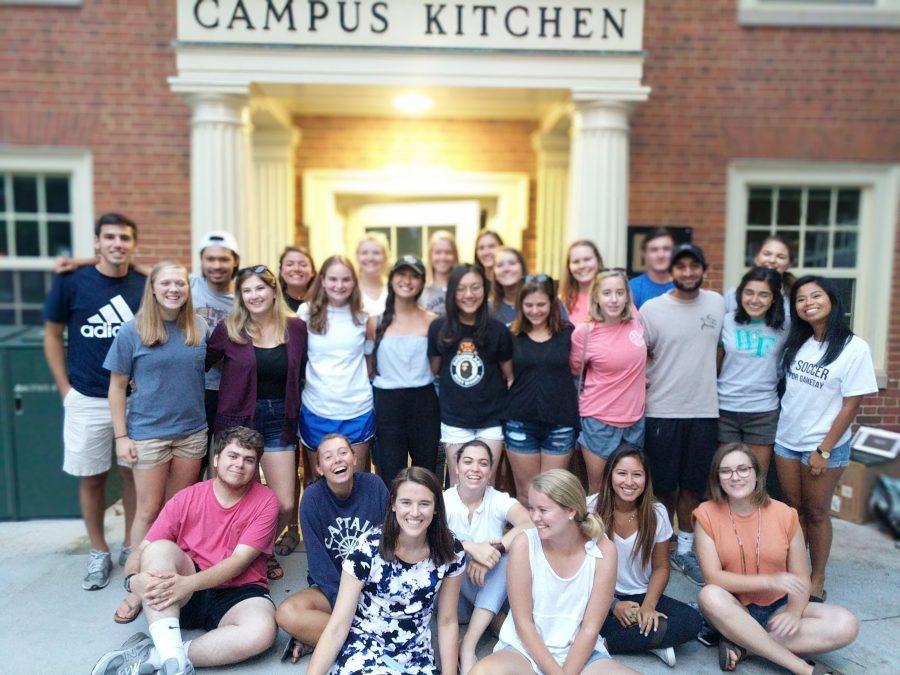 On Nov. 9, Campus Kitchen hosted Robin Emmons as the keynote speaker to kick off National Hunger and Homelessness Awareness Week at Wake Forest.

Emmons is the founder and executive director of the organization So Much Good and was the 2013 CNN Hero. Her organization aims to provide nutritious food to neighborhoods that typically do not have access to healthy food options. She accomplishes this by growing fruits and vegetables in her own backyard and working with the community to hold farmer’s markets.

Much of Emmons’s motivation to begin this organization came from her own family history and childhood experience. When Emmons was young, she lived in a poor area of Boston, where the life expectancy was 58 years compared to the neighboring town’s 91 years. Due to their circumstances, she emphasized that her parents often made difficult decisions such as deciding between paying the bill for the heat in the house or putting food on the table.

“I could feel the judgement when shopping at supermarkets as I pulled out colorful slips of money, food stamps, to pay for the food,” Emmons said.

When Emmons grew up and started working in a corporate office in Charlotte, she would often see her brother homeless in the street. He did not want to go to a homeless shelter because of his severe schizophrenia. Emmons felt hopeless and desperately wanted to help her brother, but she didn’t know how.

This predicament occupied Emmons’ thoughts to the point where she quit her job and decided it was time to take action regarding her brother’s situation. She petitioned for guardianship of her brother, which was later granted. She focused on getting him psychosocial and meditative rehabilitation so that he could begin to piece his life back together. As if these circumstances weren’t enough, her brother later discovered he had diabetes, putting him at severe risk. This was when Emmons decided to transform her backyard into a garden and began growing food and donating it. She developed a passion for food as a basic human right and encouraged members of the Charlotte community to get involved. Once she established her 501(c)(3) foundation, groups from local schools started volunteering. They began setting up farmer’s markets in low-income communities, but struggled to make target members feel comfortable, and discovered they needed to establish trust with members of the community. Thus, they partnered with Whole Foods to help them learn more about community engagement.

Emmons is currently reassessing the goals of her organization as it approaches its 10-year anniversary. Though there have been many temporary fixes for these issues or “patchwork,” her organization is still working on a long-term solution and trying to facilitate bigger conversations. The organization is working on creating a full-service option for growing food since they currently cannot grow food in the winter. Additionally, they have plans to implement a full-service and fully sustainable green grocery store made by the community for the community. She estimates that the first store will open in Charlotte in 2018. Finally, Emmons is looking to create a community bank.

At the conclusion of the discussion, senior Andrea Zhang said, “it’s always good to learn more. It’s so nice that she cares about more than food, but also homelessness and mental illness because they are all connected.”

Zhang also stated how parts of her hometown face similar struggles, which is why she is so passionate about the subject and decided to join Campus Kitchen.

Furthermore, Emmons applauded Campus Kitchen for the efforts and encouraged them to continue doing good work in the Winston-Salem community. She encouraged members of the audience to hold their elected officials accountable and remind them that they have a responsibility to help members of the community who fall through the cracks.

This event was the beginning of a week dedicated to hunger and homelessness awareness. Other events included the Hunger Banquet and the Stop Hunger Now food packing session, both led by Wake Forest’s service fraternity, Alpha Phi Omega.