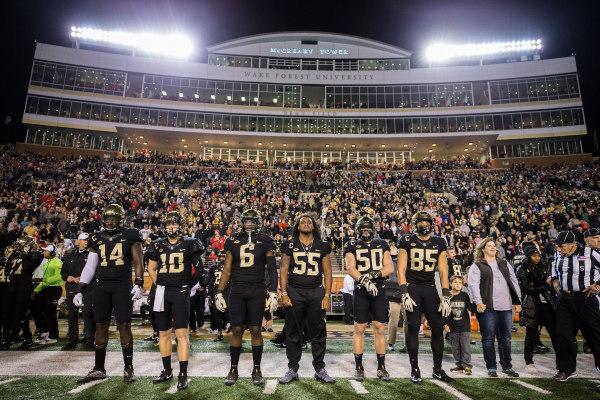 Because Notre Dame lost to Stanford in its season finale, the Irish have effectively fallen out of contention for one of the New Year’s Six Bowls, a fallout that will likely impact the ACC bowl selection.

A part of Notre Dame’s agreement with the ACC is that it would be allowed to take a spot in one of the ACC’s bowls if it were left out of one of the bowls sponsored by the College Football Playoff.

With Notre Dame taking one of the ACC’s bids, competition for some of the middle-tier  bowls is likely to be dependent on whether or not the ACC is given the Citrus Bowl.

If the Orange Bowl were to select a Big 10 opponent to face the automatic bid of an ACC team, then the conference would be given the Big 10’s spot in the Citrus Bowl.

All signs are pointing toward the Deacs playing in the Belk Bowl in Charlotte on Dec. 29.

The only possible reason that this may not happen is if the Belk Bowl decides to take the Wolfpack instead, which could only happen

if NC State fails to receive a bid from the Gator Bowl, formally known as the Tax Slayer Bowl in Jacksonville.

All schools will officially know their fate on Sunday, Dec. 3.