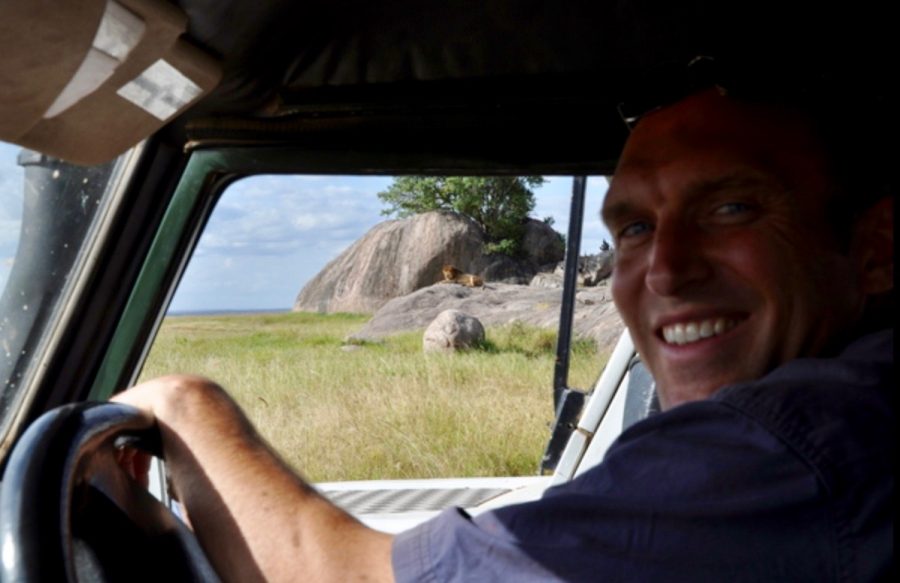 While studying an African savanna rodent known as the spring hair, he started to wonder what drives the complex species-plant interactions that make these vast grasslands unique.

Anderson’s curiosity has led him to conduct research projects on savanna ecology and species diversity in Serengeti, Tanzania.  He now tries to find a balance between teaching biology classes on campus and conducting research on a separate continent, both with the goal of highlighting the importance of protecting these sanctuaries for some of the world’s most incredible species.

Grazing ecosystems are ecosystems that are dominated by large-bodied herbivores. In the Serengeti (in Tanzania in central Africa), it’s the wildebeest. There are over a million wildebeests that migrate around the ecosystem every year. The Serengeti is unique in that the boundary of the national park is really defined by the migration of these wildebeests. A large part of the productivity, meaning plant growth, gets consumed by large herbivores. That doesn’t happen in forests, for example. In forests, the major herbivore tends to be insects, and they’re not consuming a large part of the productivity every year. So, we call [regions like the Serengeti] grazing ecosystems.

Savanna ecology and conservation is the theme of your research. Can you explain some of the specific projects you are currently working on?

It turns out savannas are very dynamic ecosystems with lots of shifts between grasslands and woodlands. I’m interested in why savannas change so rapidly and what causes these turnovers. The other thing I’m really interested in is predator-prey interactions in savannas and how those translate into changes in the ecosystem. How do changes in the predator community cascade all the way down to influence the vegetation?

What are some of the methods you use in the lab and out in the field?

The approaches I use are really from a broad spectrum of methods that include plant physiology and field work. We also use camera traps to study animals and their movements, and then we use remote sensing, which is satellites that are circling the Earth and collecting data on the ground. So, we use all these methods to try to link on-the-ground measurements of plants to population studies of plants and animals with camera traps.

You also use Snapshot Serengeti, a project that has 225 cameras placed throughout Serengeti National Park to take pictures of the wildlife. How do you use the data collected from SS for your research?

The main way we use it is to study the spatial distribution of the animals. It gives us a continuous record of where animals in the landscape are. For example, we can use satellites to tell us where the best habitat is in a particular season because it will be green with lots of vegetation growth doing one part of the year. Then we use the camera traps to see which species are responding to that pulse of vegetation growth.

What is the goal of your research?

Each project has a different goal, but the main thing I hope is that my work will create a better understanding and appreciation of savanna ecosystems and how important they are to protect. These are areas that are incredibly threatened around the globe. They’re losing species, predators and habitat. It’s essential that we protect them, but in order to do that we need to know how they function.

What do you think is the greatest threat to savannas?

The major threat is habitat loss. Habitat loss is the single most important anthropogenic, destructive effect. These [savannas] tend to be areas that are really good for agriculture, [but also] climate change is obviously a great threat. For example, in their nature, savannas are places that burn often. Fire is a part of their evolution and ecology. We don’t know how climate change is going to influence the extent of fire, the frequency of fire and the severity of fire.

Exactly. For example, one consequence of climate change is believed to be more severe rainy seasons and longer dry seasons. This would lead to large amounts of vegetation growth followed by a dry period, which is the perfect condition for fire to burn. Fires are a really important part of the ecology in savannas, but as soon as you start to change the frequency or severity, there can be consequences, such as habitat loss.

Why is it important to protect African savannas? What’s at stake?

I look to these ecosystems with elephants, lions and rhinos; if we can’t protect them, then how are we going to protect all of the other biodiversity that people don’t even know about or recognize? These are emblematic ecosystems that I think really represent our struggle to stop environmental destruction. And so, not only are they important for their ecosystem services, which are key, but really they are emblematic of our attempt to protect biodiversity on Earth.

Do you think there is a lack of awareness regarding the importance of protecting savannas?

I think that especially people in the U.S. don’t really know much about savannas at all. [Savannas] are really important on other continents, so we don’t think about them much here. You asked me if there is a misconception about the importance of protecting these areas. Absolutely, and it’s at the forefront of the science that is happening now. Even in the scientific community, where obviously, scientists know about savannas, I think there’s a lack of appreciation for how threatened and important they are.

What do you think is causing this lack of awareness?

Part of it is being overwhelmed by this well intended attempt to reforest ecosystems, to plant trees and pull carbon dioxide out of the atmosphere. The problem is savannas don’t need reforesting. They are dominated by grass, inhabited by grazers and they burn. All these animals that we care about and are trying to protect, [savannas] are the systems that they rely on. And if you try to reforest them, it will completely change the way they operate.

On your lab website, you say the Serengeti is “one of the last remaining fully functional grazing ecosystems.” Can you explain what that means?

Because of habit destruction we’re losing a lot of the species, especially predators and large herbivores that make up an important component of these ecosystems. In Africa, the Serengeti is one of the last of these ecosystems with the entire community fully intact.  There haven’t been any extinctions with the species that we believe have evolved there over the last several million years.  [The species] are interacting in what we think is a naturally functioning ecosystem.  That is very rare because the Earth now is dominated by humans and our effects reaching every single ecosystem on Earth.

Can you give an example of a grazing ecosystem negatively impacted by humans?

The Great Plains of the U.S. was one of the greatest grazing ecosystems on Earth. There used to be somewhere in the neighborhood of eight million bison that used to migrate throughout the plains from Texas to Canada. It’s now a giant corn and soybean field. There’s very few tiny remnants of that ecosystem left. Yellowstone is one piece of what used to be a much larger grazing ecosystem that occurred throughout the U.S.

You’ve been travelling to the Serengeti two to three times a year since 2000. Can you describe what it is like to experience the wildlife and landscape firsthand?

There are very touristy areas in the Serengeti, but it only takes a few minutes to get way out in the remote part of the ecosystem. When you’re in amongst the wildebeest migration it’s like nothing else on Earth. I never get tired of seeing that migration or just being in total awe of how many animals are there. My kids go to sleep at night, and they don’t get to see the Milky Way and shooting stars because there is so much air pollution.

But when you’re [in the Serengeti], you see every star in the sky. The Milky Way is so bright. You hear lions calling in the distance. It’s a wild and incredible place. Every time I’m there in the open grasslands it gives me hope. I’m thankful that there are still places like [the Serengeti] on Earth.