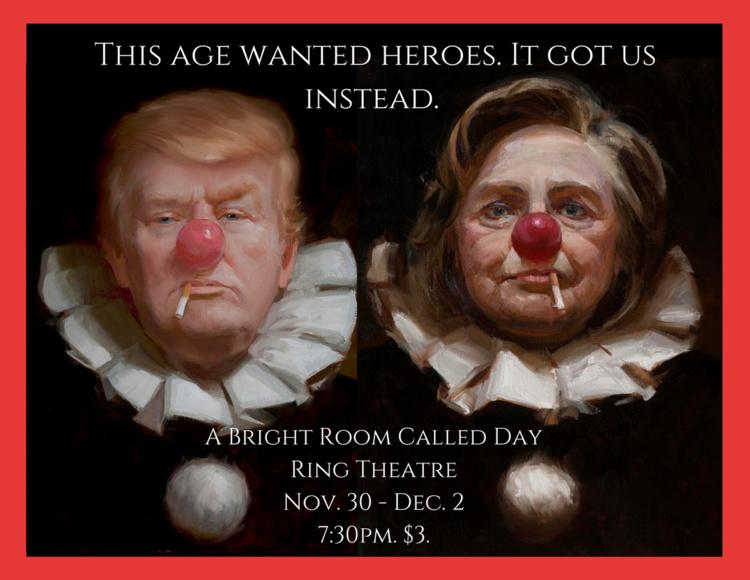 “The play’s about how a bunch of arrogant, egotistical, intellectual liberals are going to react to an election they see is fascistic and what they’re going to do when there are a bunch of Nazis marching around in the streets,” said director senior Eli Bradley.

The play follows a group of actors and political activists in early 1930’s Berlin. The audience witnesses the collapse of Weimar Germany and the rise of Adol Hitler, all from the confines of Eggling’s apartment.

In Act One, the characters appear hopeful, inspired by the changing times. Come Act Two, darkness seeps in and becomes so dense nearly every character has an explosive or otherwise depressing moment of self-actualization.

Throughout the play, there were “Interruptions,” or scene segments featuring Zillah (junior Sierra Leslie), a contemporary conspiracy theorist in an “I’m With Her” t-shirt. Most of the play, Zillah observed the Berlin affairs and ranted from her alcove, a portion of audience seating sectioned off with Caution tape and covered in newspapers, on which she wrote.

During another rant, Zillah explained that Ronald Reagan was a new Hitler. Tony Kushner authored the play in the 1980’s and, using Zillah as his mouthpiece, expressed his disdain for President Reagan’s politics. Other versions of the play have arisen wherein Prime Minister Margaret Thatcher or President George H.W. Bush is Hitler.

Senior Katie Super, a representative of Wake YDSA, a new left-leaning political student group, had many thoughts on the topic and further enabled her curiosity at one of the post-performance “Talk Backs.” After, she also read an excerpt from Milton Mayer’s They Thought They Were Free, as suggested by professor Sara Dahill-Brown.

“You observe things moving in a worrisome direction, but you’re not quite sure how far in that direction they’re going to go. In retrospect, when I look at the play, it’s kind of hard not to think, well, that’s maybe not the best comparison, but it’s also possible that at the time the play was written, it seemed like that comparison was appropriate,” Super said of the President Reagan comparisons.

“It was disheartening to hear the America of today compared to the Germany of yesterday. To imply that what happened then is going to happen now is to say that we would stand by as people, to governmental crime and genocide,” said senior Megan Nigro.