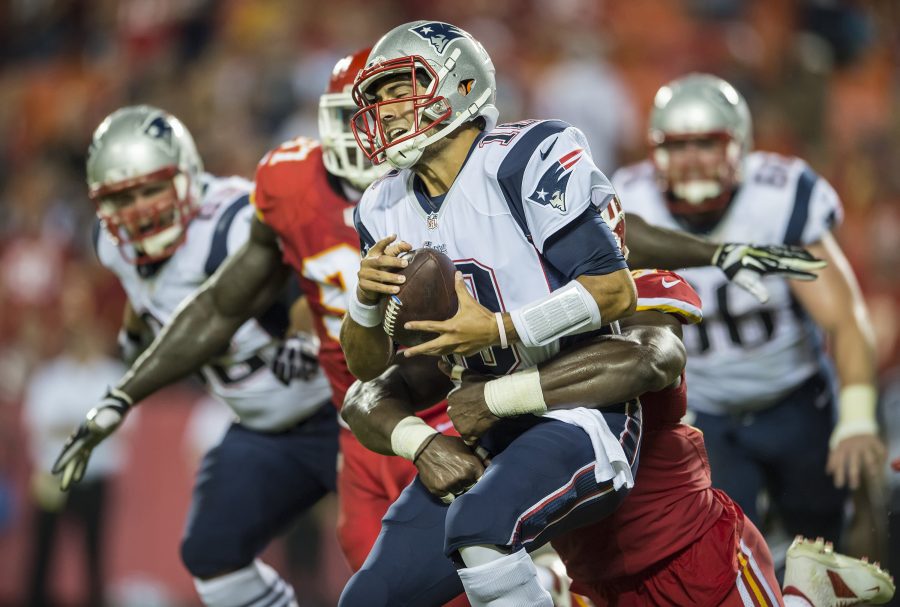 Week 1 of the 2017-18 NFL season further proved that no matter the opponent, in this league winning is no simple task. Several preseason favorites lost or struggled in their opener, and the acquisitions in the offseason and draft allowed others to defy expectations.

The New England Patriots, reigning Super Bowl champs, fell 42-27 at home to the Kansas City Chiefs. The Patriots were certainly expected to win the game, and many pundits anticipated that the game could be a blowout. Instead, the Chiefs were able to exploit a weak Patriots secondary and dominate the fourth quarter. After losing a fumble in the first quarter, rookie Kareem Hunt collected 246 total yards from scrimmage, which was the most ever in an NFL debut, and also found the end zone three times. Chiefs quarterback Alex Smith also showed that he can still sling it, throwing for 368 yards and four touchdowns.

Patriots fans should not panic yet, however, as the Pats have won the Super Bowl the last three times that they dropped their opening game.

The NFC champion Atlanta Falcons and AFC powerhouse Pittsburgh Steelers both hung on to complete tightly-contested games against teams that had less-than-impressive records last season.

The Falcons traveled to Soldier Field to face off against a weak Bears team. The Bears, who made the controversial choice to draft UNC quarterback Mitch Trubsiky with the second pick of the draft, elected to start fringe quarterback Mike Glennon, as Trubisky was not yet deemed ready to start. Glennon did a serviceable job under center this weekend, and was efficient enough in the fourth quarter to help the Bears march within a few yards of winning the football game.

The Bears comeback was finally stymied when Falcons linebacker Brooks Reed sacked Glennon on fourth down, allowing the Falcons to run out the clock and escape with a victory.

The Pittsburgh Steelers also went on the road to face an ostensibly weak, albeit improved, Cleveland Browns team. The Browns scored eight fourth quarter points, and pulled within three points of the Steelers before their comeback stalled. From 1999-2016, the Cleveland Browns have started more than one quarterback in every season except for 2001, and they were hopeful that rookie DeShone Kizer could perform well enough to keep the team competitive for a period this season. Kizer, a Notre Dame product, limited mistakes, and threw for 222 yards and a touchdown, building some hope for his future with the Browns.

His successes, however, were not enough to help the Browns catch the Steelers, who rode the 182 yards of wide receiver Antonio Brown to a 21-18 victory.

One of the most enticing matchups of the weekend was the Seattle Seahawks trip to Green Bay to face the Packers. Each team made the playoffs last season, and both are early frontrunners for the NFC crown. The Seahawks defense, which consistently ranks in the league’s top three, was able to shutout the Packers in the first half, and the Seahawks took a 3-0 lead into the locker room. Packers quarterback Aaron Rodgers struggled early in the first half, and threw a rare interception to the 304-pound rookie Nazair Jones.

The Packers bounced back in the second half, scoring 17 points and holding the Seahawks to just six en route to a 17-9 victory. Though it was just the first game of the season, this game was an important one for both teams, as they each have playoff hopes and could face each other again in the playoffs.

The Dallas Cowboys played an important opponent as well on Sunday when they faced the conference-rival Giants. The Cowboys were the #1 seed in the NFC playoffs last season, and they were able to continue their regular season dominance and defeat the Giants 19-3.

Amidst domestic violence allegations, Ezekiel Elliot was allowed to play on Sunday, and he rushed for 104 yards and had 36 more through the air. Elliot was originally given a six-game suspension but was able to temporarily block the ruling via a preliminary injunction. Barring the NFL’s obtaining an expedited reversal of this injunction, Elliot will likely be able to play the entire season free of suspension.