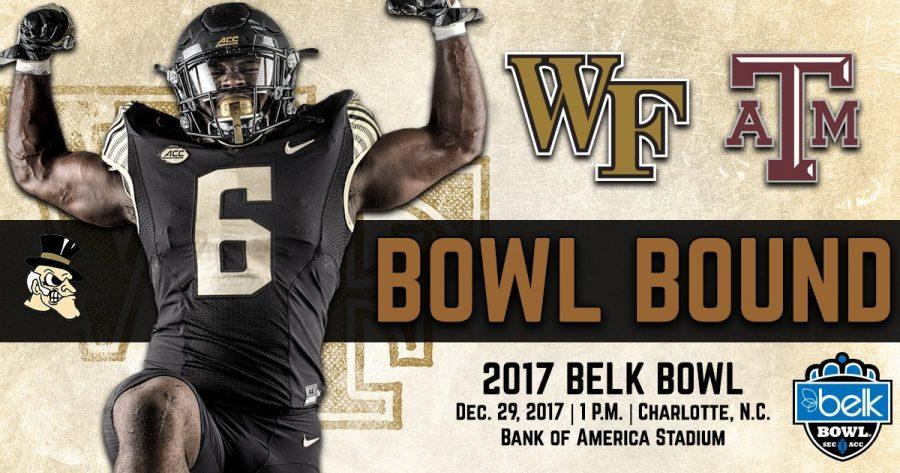 Coach Dave Clawson said making it to a bowl game is a goal every season, especially since it’s an opportunity to reward the players for a successful season.

For the second year in a row the Deacs will play in a bowl, which for the players is more than just a game. It’s an opportunity to enjoy a new city, try new things and celebrate a successful year.

The Wake Forest team traveled to Charlotte, NC on the afternoon of Dec. 25 and enjoyed Christmas dinner at a Brazilian steakhouse.

Senior Grant Dawson joked that it was not shocking who got the most bang for their buck at dinner that night, telling reporters offensive linemen such as Ryan Anderson and A’Lique Terry cleaned their plates.

Team dinners accompanied by trips to the Charlotte Motor Speedway, the NASCAR Hall of Fame and a shopping outing to the Belk department store made for a fun week for the players. Because of these opportunities, the Belk Bowl was the desired destination for many on the team. But for others local ties made Charlotte most attractive.

Redshirt sophomore Amari Henderson’s visit to the Queen City will be a homecoming of sorts. Hailing from local powerhouse Mallard Creek High School, Henderson will play in front of a number of friends, family and former coaches.

“I got a bunch of calls and texts from past coaches all the way from pee-wee to high school,” said Henderson, who expects to have a lot of local support.

“[I got] my family, cousins, aunts, uncles and grandma, [who] just moved from Ohio to Charlotte so she’s able to come see me play, so that’s a blessing.”

Henderson grew up following the Carolina Panthers and is excited to play at the same stadium that used to be home to some of his idols.

“I grew up watching Steve Smith, Muhsin Muhammad and Julius Peppers and all them, so it’ll be pretty fun getting to play on that field.”

For the past week, Henderson has enjoyed the bowl festivities, including a ride in a stock car at the Charlotte Motor Speedway.

“That was my first time being on that track,” Henderson said, “and just having that whole experience man, it was fun. I’m thankful for it.”

Senior linebacker Jaboree Williams has also enjoyed his time in Charlotte, especially the trip to South Park Mall to shop at the Belk department store.

Williams went in with an open mind and left with a new suit.

“Well, I kind of want to get a couple of suits, you know, because I didn’t have the money to get the $400 suits, the Polo Ralph Lauren suits,” Williams said. “I would just kind of mix and match, put everything together. But now I can go in and walk confidently knowing that I have a $450 gift card that I can just go in there and get the fanciest suit.”

Other players left with gifts for their mothers and siblings, others with necessities such as socks.

Dec. 27’s trip to Belk was the end of the festivities for the week as Thursday was the final day to prepare for the big game.