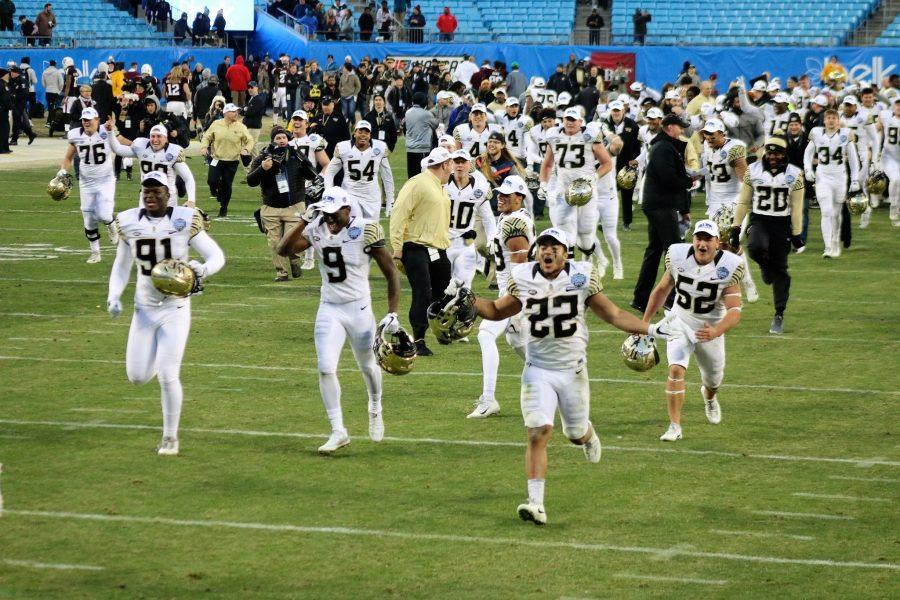 For Demon Deacon fans across the country, the best Christmas present of all came a few days late with a hard-fought Belk Bowl victory against the Texas A&M Aggies.

Upon first glance, the score seems like it belongs in the first half of a college basketball game, with the final score of 55-52.

Not only was the score high, but so was the energy from Demon Deacon fans. On this sunny, clear day in Charlotte, the spirit of the students, alumni and fans of Wake Forest from near and far filled Bank of America Stadium with the same energy as any home game at BB&T Field.

Junior Moe Rama was excited to see “the stadium packed with Wake fans who stood on their feet and cheered for the entirety of the game.” After being abroad for the semester, Rama could not “think of a better way to end the 2017 football season or year.”

Only 85 miles from the Wake Forest Reynolda Campus, the game was a great opportunity for local students, fans and alumni to gather in Charlotte. Winston-Salem native and Wake Forest junior Melina Jorizzo drove down for the Belk Bowl festivities.

“The excitement that the Wake fans brought to Charlotte this afternoon over the holiday break was remarkable,” Jorizzo said.

Many fans travelled from out-of-state for the opportunity to watch the Deacs play. Junior Sydney Calkins, who lives in Georgia, said, “I was so excited to be able to road trip to Charlotte to cheer on the Deacs and watch them win.”

The game was also a fun way for alumni of all ages to reconnect. Evelyn Branum (‘16) described her bowl game experience as, “incredibly fun and just like being back at home games in Winston.” After the victory, Wake Forest ’87 alumnus Alan Dickens described the future of Wake Forest football as “bright” and stated that he was “so proud of the Deacs and Deacon Nation.”

The student section echoed a similar sense of excitement. “We all stood along the student section to high five the team as they made rounds around the stadium,” senior Abby Revelle said. “It was cool to be able to say congrats personally to players we knew.”

As this is Wake Forest’s second bowl appearance in the last two years, fans were excited to travel again to support the team. “It was so fun to watch the Deacs win a bowl game for the second year in a row,” sophomore Elizabeth Koscielniak said. “There’s nothing quite like being in the stands cheering with so many other Wake fans who are all passionate about our school.”

As the Deacs cap off a strong 8-5 season with over four and a half hours of hard-fought football, it seems to be only the beginning of a pattern of success for Wake Forest football led by head coach Dave Clawson.