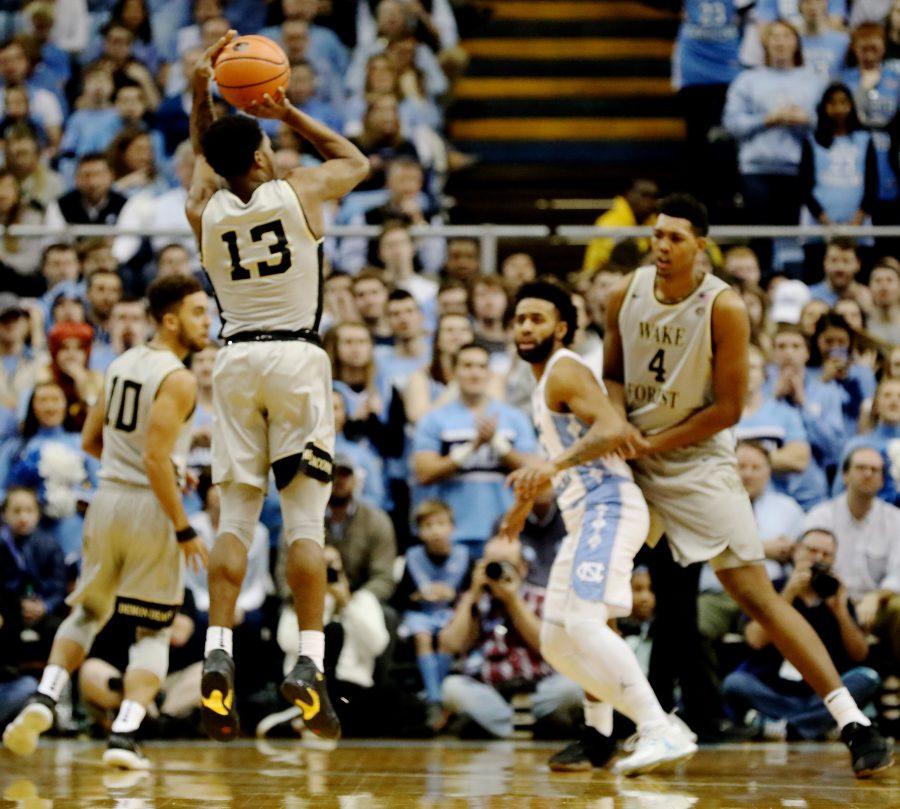 The Deacs had not won in the Dean E. Smith Center since 2010, and before Saturday’s contest, no one was really giving them a chance.

Manning’s squad had defeated just one opponent belonging to one of the five major conferences through non-conference play while the Heels had five such wins this year, hardly missing a beat from last season, despite losing a number of key pieces on their roster.

Wake Forest trailed 35-30 at the half, keeping the game close despite shooting just 30 percent from the floor. Seven steals and seven blocks on the defensive end for the Deacs gave the Heels fits and led to nine Deacon points in transition in the game’s first 20 minutes.

After an abysmal collective first half shooting performance, scoring for both teams picked up in the second half.

Leading 62-53 with 8:39 left to play, the Tar Heels looked as if they would run away with it, as the North Carolina faithful were on their feet, enlivened after a Brandon Childress turnover led to a Kenny Williams dunk.

The Deacs silenced the crowd momentarily, however, connecting on three straight 3-pointers to tie the game at 62. Following a Bryant Crawford jumper with 2:23 left to play, the Deacs found themselves with a four-point advantage.

North Carolina responded like they often do, scoring six straight points, with the game-winner coming from a Joel Berry II floater with nine seconds left on the clock.

Down by two and with one final possession to either tie or win the game, the Deacs took one final timeout. The idea was that they would take whatever the defense gave them, whether that meant space to pull up from three or an avenue to drive to the basket.

Keyshawn Woods found that the defense collapsed and pulled up from beyond the arc. The ball hit the back of the rim and the Tar Heels escaped with a 73-69 victory.

“We believe in [Keyshawn] and he told us to find him,” Crawford said of the Deacs’ final possession. “I felt like it was a good shot, he makes tough shots and I thought it was going to go in.”

Crawford told reporters the team doesn’t believe in moral victories, but for a Deacon team that won just one of its first four games of the season, playing the defending National Champions on their home court to the final possession should be a sign of tremendous progress.

North Carolina’s Roy Williams was happy to get the win today, even though he was not pleased with his team’s performance.

“I told Danny [Manning], and I really believe it, we were the lucky team, we weren’t necessarily the best team and we darn sure weren’t the best-coached team out there today.”

Despite coming up short, Manning found his team’s fight, especially in the second half, to be encouraging for the days ahead.

“We didn’t get the outcome that we wanted, but if we play like [we did] in the second half today, for two halves moving forward, we’ll put ourselves in situations to be fairly successful.”

Wake Forest will return to Winston-Salem on Wednesday, Jan. 3 to face another Hall of Fame coach in Syracuse’s Jim Boeheim. The Orange (11-2) will have one less day of rest than the Deacs, as they host Virginia Tech on Sunday, Dec. 31.