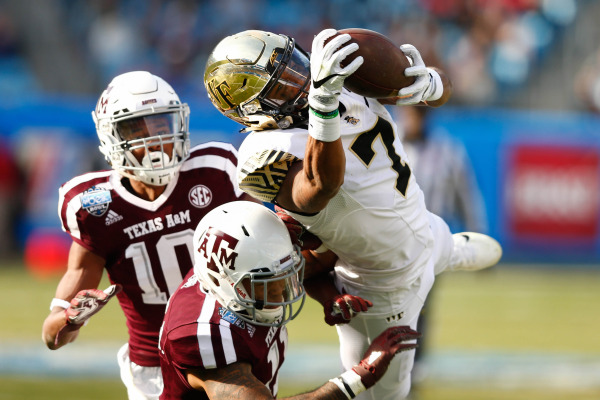 “If you write the movie script, as soon as he walks out that door there’s a girl that falls in love with him and he gets married and lives happily ever after. It’s a storybook ending. You can’t make this stuff up.”

These were the words of coach Dave Clawson, talking about his quarterback, John Wolford, who threw for 400 yards and four touchdowns in his final game as a Demon Deacon, defeating Texas A&M 55-52 in dramatic fashion.

In his fourth year as Wake Forest’s head coach, Clawson has rebuilt the Demon Deacon football program, taking his team to a second straight bowl and winning eight games for the first time since 2008.

Clawson credits his senior class for changing the culture of his football team and for raising the program’s standard, which he expects will continue to rise each year. A victory in the Belk Bowl was the “cherry on top” for Clawson, and would not have been possible if it were not for the brilliant play of his quarterback Wolford.

“Two years ago there weren’t a lot of big John Wolford fans,” Clawson said. “For him to go out and ignore the critics and believe in himself is really a testament to his character and the type of person he is.”

In four years, Wolford has improved as much as any player in college football, and his recognition as the game’s Most Valuable Player was an appropriate send off for one of the all-time bests to wear old gold and black.

In humble fashion, Wolford credited the play of his offensive line, running backs and receivers for the success he experienced in the Belk Bowl and all season long.

“Across the board from Scotty [Washington], to Cam [Serigne], Tabari [Hines], [Alex] Bachman, Matt [Colburn], Cade [Carney] — all of them made huge plays,” Wolford said.

“They gave me MVP but they could have given it to anyone on the offense.”

Normally when an offense scores 55, it wins with ease. But not in the 2017 Belk Bowl, which was one of the highest scoring bowl games in history with a combined 107 points and 1,260 yards.

“It was a crazy game,” Wolford said. “We got up early and then fell behind. But I never had a doubt. This team has been through a lot, so a close game wasn’t going to faze us. And we got it done. That is what mattered most.”

The Deacs scored 31 unanswered points in the first half after facing a quick 14-point deficit following two blocked punts.

Scotty Washington turned things around for the Deacs as he created space in the first quarter and got open for a 50-yard touchdown to begin the offensive attack for Wake Forest. On subsequent possessions Wolford spread the ball around and found Hines for two first-half scores and another to Serigne from 37-yards out.

With his 21st career touchdown reception, Serigne became the best statistical tight end in the history of the Atlantic Coast Conference, passing Virginia’s Heath Miller for the most touchdowns by a tight end in a career.

Before the Belk Bowl, Wolford hinted that he hoped he and Serigne could connect one final time, recalling that Serigne, a redshirt senior, hosted him on his official visit to Wake Forest five years ago. Hooking up one final time allowed the duo to come full circle, getting an ACC record in the process.

Wake Forest’s offensive explosion extended all the way to the end of the first half, as did Texas A&M’s.

The Deacs entered the locker room with a 38-28 advantage and were well aware that the second half would require a similar effort.

The Aggies scored on their first possession out of the half as quarterback Nick Starkel found receiver Christian Kirk for the third time of the day. After cutting the Deacon lead to just three points, Wake Forest responded with a 27-yard field goal to extend the lead to six.

Texas A&M proceeded to score 10 straight, retaking the lead for the first time since the first quarter. Trailing 42-41 with 12:31 left to play, Wake Forest needed an answer.

Running back Matt Colburn led the Deacs on the following drive, carrying the ball three times for 38 yards on the 11-play drive that led to a Cade Carney one-yard score on fourth and goal.

However, the Demon Deacon lead was short-lived once again as the Aggies took the ball 72 yards down the field on a 10-play drive to take a 52-48 advantage.

With just 5:52 left to play Wake Forest needed its best drive of the game to take the lead.

In “storybook” fashion, Wolford led the offense one final time, in a 13-play 69-yard drive that took 3:26 off the clock. On the drive, Wolford completed four passes for 42 yards and carried the ball four times for 15 yards. After leading the Deacs down to the 1-yard line, Colburn capped off his 150-yard rushing day with the game-winning touchdown.

With a 55-52 lead and 2:18 remaining, the Deacs needed a defensive stop to win their second-straight bowl game.

Starkel completed five of his first six passes on the drive, nearly making it to midfield. Then, on third and fourth downs, pressure from the Wake Forest defense forced two incomplete passes, ending the game and giving the Deacs the 55-52 victory.

The Wake Forest Demon Deacons are the 2017 Belk Bowl Champions. Wolford, Serigne and the rest of the senior class got their storybook ending and will forever be the catalysts that turned this program around for the better.