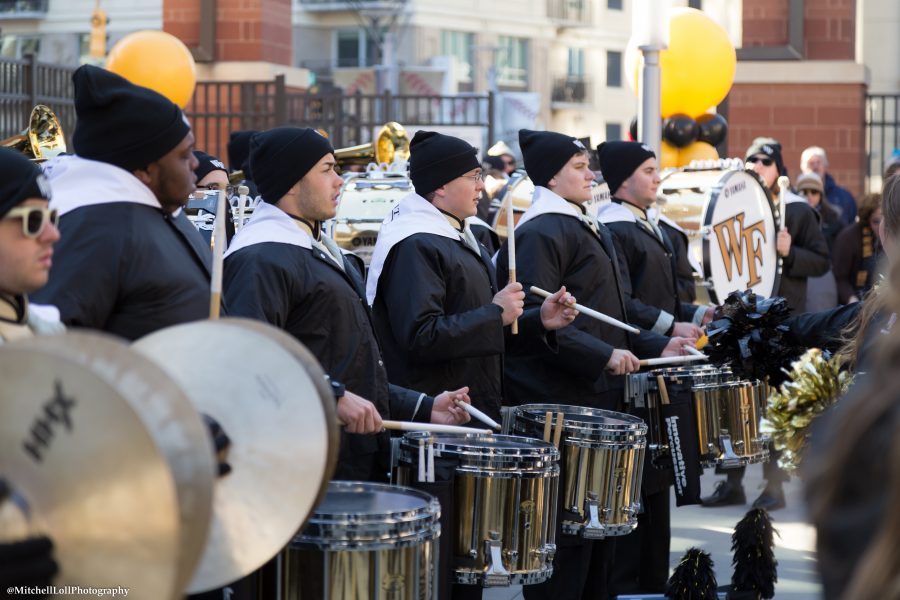 After the Wake Forest football team arrived in Charlotte for the Belk Bowl on Dec. 25, they were closely followed by the spirit team, which arrived on Dec. 27. Members of Wake Forest’s marching band, the Spirit of the Old Gold and Black (SOTOGAB), traveled from across the country to perform at the game on Dec. 29.

The SOTOGAB staff, including Director of Bands Kevin Bowen and Associate Director of Bands Brandon Robinson, worked to arrange travel accommodations before students left for winter break. Some students in North Carolina traveled by a chartered bus from the Wake Forest campus, while others in the Charlotte area were dropped off. The remaining students flew, coming from as far as California, New Jersey and Florida. One band member in particular had to travel an extraordinary distance.

Freshman Guilherme Franco, a member of the drumline, traveled from his home in São Paulo, Brazil. Franco flew from São Paulo to Miami and then on to his final destination of Charlotte. By the time he arrived, the trip totalled over fourteen hours.

Coming from such a far place, Franco felt especially grateful for this opportunity to play at the Belk Bowl.

“I felt really honored to participate in this historical event,” Franco said. “I am thankful that Wake Forest could make it possible; it is something I will never forget.”

Once all SOTOGAB members and staff arrived at the hotel, feet away from Wake Forest’s Charlotte Center, they convened on the rooftop for a late-night practice. For junior Carly Gordon, a trumpet player, the worst thing about the practice was the brutal cold and wind.

“It’s very difficult to play a brass instrument in the cold because of how cold the mouthpiece is on your lips – it immediately numbs them and it’s next to impossible to play with a numb face,” Gordon said.

Others, like freshman Michael Vlahos, simply took in the unique experience of playing on a hotel rooftop.

“The acoustics on the roof were really cool and you could hear the echo, especially of the drums,” Vlahos said. “Playing out in the middle of the city was very cool as well, since I knew we would be heard from all over Charlotte.”

The next morning, SOTOGAB woke up early for another rehearsal. This time, they were not on a roof, but on the football field at Ardrey Kell High School. It was in the low 20’s with wind chill, but as junior Daniella Feijoo noted, “[we] pulled through and made the most of the chilly temperature and wind.”

After a short performance at a spontaneous flash mob, members of the band had a few hours to themselves before the next pep band event that evening. Many took advantage of being with their friends in a new city by exploring downtown Charlotte. Groups of students toured nearby art museums, ice skated at the NASCAR Hall of Fame, shopped, bowled and even visited the Wake Forest Charlotte Center. Others chose to relax by grabbing lunch, watching other bowl games on television and catching up on much-needed sleep.

The next event for SOTOGAB was Fan Central, which occurred at the EpiCentre, an open-air mall. In an imitation battle of the bands, SOTOGAB faced off against Texas A&M’s marching band, the Fightin’ Texas Aggie Band. Each band brought 50 members and alternated playing songs to get the crowd hyped up.

Creating excitement and generating Demon Deacon spirit is one of the main missions of SOTOGAB, according to Bowen and Robinson. These small pep band performances are just as important as a game-day performance.

“At a bowl game, there are several performance opportunities at community pep rallies to introduce the local community to what we do and to get our loyal fans excited about being selected for a bowl game,” Bowen said.

For sophomore Skylar Liang, SOTOGAB’s media coordinator, these performances, and the Belk Bowl overall, helped to increase awareness of the band. She recognizes that SOTOGAB is a small marching band from a small university, so it was a bit intimidating to face the Fightin’ Texas Aggie Band, which is nationally known and has upwards of 300 members. But, Liang knows that SOTOGAB has the “excitement and energy of a million.” Her enthusiasm was clear when she took over the official Wake Forest snapchat for the duration of the trip. In addition, the SOTOGAB Twitter account interacted a lot with the Wake Forest University, Wake Forest Football and Belk Bowl accounts in the week leading up to the game.

“[These interactions] helped created a ‘home field advantage’ at Bank of America stadium, Liang said. “Also, because of the amount of Wake Forest fans who stayed to watch the whole game, there were a lot more people watching SOTOGAB than usual.”

On game day – the day that everyone had been waiting for – SOTOGAB performed in the stands, but also performed a shortened version of their usual pre-game routine and selections from their 2017 shows, a Tribute to Broadway and Longtime, at halftime. For SOTOGAB, performing on an NFL field was another unique opportunity.

Students in the band get as invested as any Demon Deacon football fan. Wake Forest won the Belk Bowl with a score of 55 – 52, but the road to this win was long and winding. Many students in band compared the stress of the game to exams.

“I was more stressed during that football game than I was during my Accounting 111 exam,” said sophomore Joe Sposato.

But, it was all worth it, especially for senior Karla Lowrey.

“The last time singing the Alma Mater as a band member and swaying with my friends is something I’ll never forget,” Lowrey said.

While SOTOGAB might be small, its members and staff cite that one of the best things about the band is its size.

“I believe our unique size allows each student to get to know the other students very well. Our band feels much more like a family than those larger bands,” Robinson said.

The trip to the Belk Bowl represented everything that the members and fans love about SOTOGAB: the opportunity to perform, to travel to new places, to be with friends and to exhibit their “passion that defies explanation.”