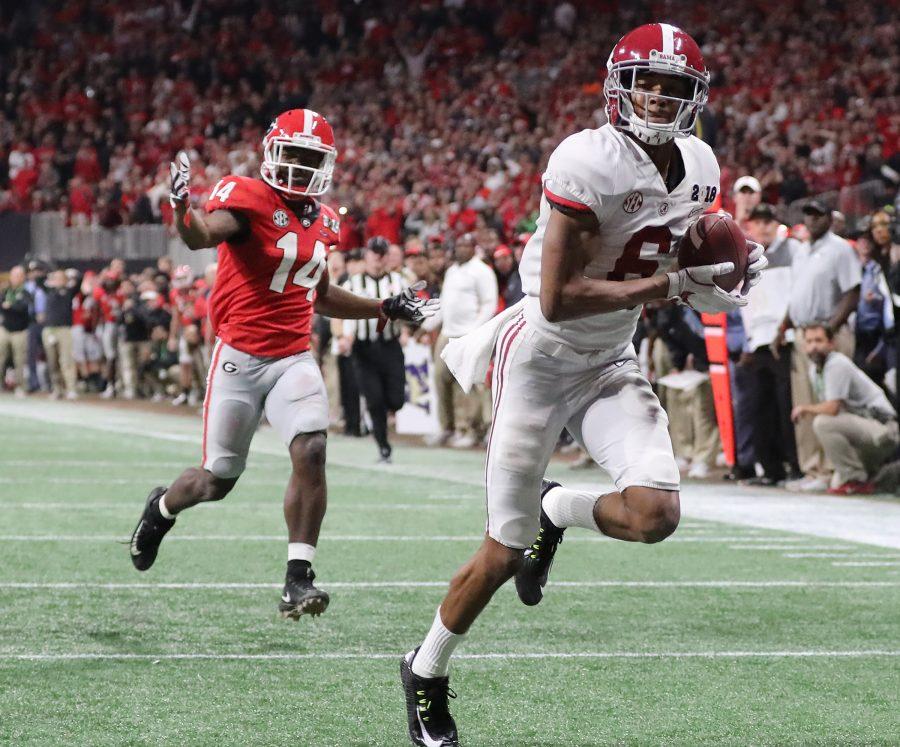 In order to reach the championship game, both Georgia and Alabama had to win semifinal matchups. Georgia squared off against Oklahoma in the Rose Bowl in Los Angeles and Alabama faced a familiar foe in Clemson in the Sugar Bowl in Dallas. The Rose Bowl was as exciting as any college football game all year.

Georgia stormed back from down 31-14 in the first half to defeat the Sooners 54-48 in double overtime.

Meanwhile, Alabama played Clemson, the team they faced in the previous two national championship games, and handled the Tigers easily, dominating them 24-6.

As for the championship game between the Bulldogs and the Tide, it was undeniably one for the ages between the nation’s best two teams. The game’s first quarter was mostly uneventful and neither team scored. The second quarter, however, was all Georgia.

The Bulldogs led by freshman quarterback Jake Fromm had their first two drives of the quarter culminate in field goals and their last drive ended with a touchdown with just seven seconds remaining in the first half. Meanwhile, the Georgia defense held the Alabama offense completely in check the entire first half. The Crimson Tide quarterback,Jalen Hurts had just 21 passing yards to go along with 47 rushing yards in the first half. This complete dominance by Georgia resulted in a 13-0 halftime lead for the Bulldogs.

It was after halftime, however, that this game got turned upside down. With his team down 13-0 and in dire need of some offense, head coach Saban made the controversial decision to bench his quarterback, Jalen Hurts, who was struggling mightily, and instead bring in a true freshman, Tua Tagovailoa. It is important to keep in mind that Hurts was 23-2 as a starter in his Alabama career entering this pivotal game, and his head coach had the gall tho bench him mid-game. Saban’s decision undoubtedly paid off.

The young freshman had never played a meaningful down in his Alabama career up to this point, as the only in-game reps he had taken all year were in mop up time at the end of blowouts. Tagovailoa, nonetheless, supplied an instant spark to the Crimson Tide’s lifeless offense to kick off the second half.

After a three-and-out on his initial drive, Tagovailoa had an amazing run on a pivotal third-and-seven from around midfield in which he evaded the Georgia pass rush and broke many tackles to gain a first down. He capped off that great drive with a touchdown pass to receiver Henry Ruggs which cut the score to 13-7. On Georgia’s ensuing drive, however, Fromm aired out a beautiful deep pass down to the sideline to his receiver Mecole Hardman which resulted in an 80-yard touchdown and pushed the Bulldogs’ lead back to 13 points.

After Alabama got an important field goal following an exchange of interceptions by the two freshman quarterbacks, the score was 20-10 Georgia entering the fourth quarter.

In the fourth, the Alabama defense continued to get stops and force Fromm and company into punts, while Tagovailoa and the Alabama offense were moving the ball.

A great run deep into Georgia territory by true freshman running back Najee Harris set up a short field goal for the Tide which cut the lead to 20-13.

On the next Alabama drive, Tagovailoa made a great throw for a huge gain into Georgia territory, which helped lead to an amazing touchdown pass to tie the game on fourth and goal by Tagovailoa to Calvin Ridley with three minutes remaining.

Georgia had a quick three and out and gave Alabama a chance to win the game in regulation.

The Tide drove right down the field to set up a potential game winning field goal, but Alex Pappanastos missed an easy kick and the game went on to overtime.

Georgia started with the ball in overtime, and following a big sack on third down by Alabama, they were forced to attempt a long field goal.

Georgia kicker Rodrigo Blankenship clutched up, however, and drilled a 51-yarder, which meant Alabama must either kick a field goal to prolong the game or score a touchdown to win.

On Alabama’s first play, Tagovailoa was sacked for a massive 16-yard loss, which appeared to spell out disaster for the Crimson Tide.

Instead, the freshman came right back on second and 26 and fired a deep pass down the left sideline and found DeVonta Smith for a walk-off touchdown, letting Alabama knock off Georgia and win the championship in overtime.

This game between two SEC powerhouses will go down in the record books as one of the greatest championship games of all time. The moment that changed the entire game was undoubtedly Saban’s bold but wise decision to replace the struggling Hurts with Tagovailoa, and it ultimately resulted in Saban’s sixth career National Championship. Saban has now tied the late, great Paul “Bear” Bryant’s record of six National Championships and has further solidified his place in the college football history books.