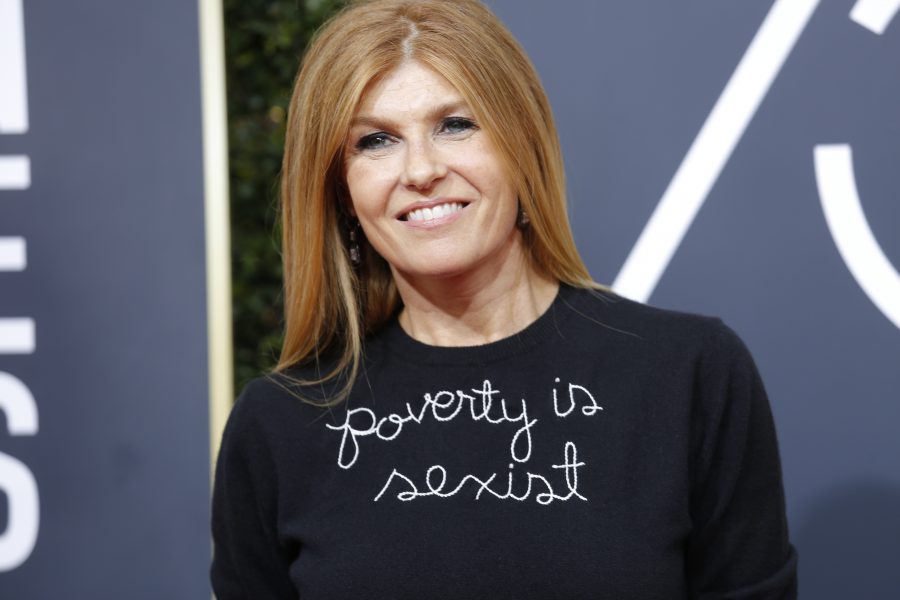 The Golden Globe Awards reached its 75th year celebrating American film and television Sunday, Jan. 7. The red carpet press for the event usually shows the line of celebrities, nominated or not, with their fellow actors or dates hand in hand. The 2018 Golden Globes carried a different feel than its prior years, going beyond surface questions and heavily focusing on political statements made through appearance.

Another difference for this year’s Globes was the amount of individuals coming forward in Hollywood regarding others in the industry who had sexually assaulted them. The Golden Globes acted as a means for voices of the powerful men and women of Hollywood to draw attention to the pressing need for women to be viewed as strong, independent individuals who will be treated as such and not silenced after mistreatment by others; namely the men of the industry.

The night began on the carpet where a sea of black was present. The Time’s Up movement asked that individuals wear black on Sunday to stand in solidarity with the movement itself and survivors of sexual assault and harassment. Almost all women wore black and about half of the men opted for the black suit as well as a black tuxedo shirt. Time’s Up pins were worn by most on top of their black outfits, showing direct support of the movement, going beyond the symbolism of black. Something important to note is how celebrities directly used their privilege to speak out to reporters on the carpet. One of the most discussed instances of the night was Debra Messing calling out E! News in an E! News interview regarding their gender pay inequity. Another significant example of the evening’s memorable events was celebrities taking activists as their dates. Actress Michelle Williams walked the carpet with #MeToo founder Tarana Burke. Emma Stone, who portrayed Billie Jean King in the film Battle of the Sexes walked the carpet alongside the tennis legend herself. King is famously known for her work regarding equal treatment of females in sports as well as being an activist for the LGBTQ+ community. So much occurred on the red carpet, but the actual show carried a lot of weight too.

Seth Meyers was the host of the 75th Golden Globes, known for his work with SNL and being the current host of NBC’s Late Night. The opening monologue of the Globe’s is widely known for its digs at celebrities attending, the political climate of America and at the films and television shows nominated. Meyers had a lot to consider for his monologue, especially how to poke jabs all while being considerate towards the issues that were brought to light in the past year. He later joked that hosting was like, “being the first dog shot into space.” He addressed the sexual assault allegations against American film producer Harvey Weinstein, as well as the uproar with current president Donald Trump. Meyers ends on a note that makes his monologue worth listening to twice. He told those at home that he knows the ballroom on the screen looks like a room of ‘Hollywood elites.’ He said he entirely understands that these films and shows could never come to life without people working ‘American dream’ jobs which require insanely long hours and is given based on talent and passion. He ended on a note that was respectable but also allowed for a laugh before the awards were announced.

A viral part of the evening was Oprah Winfrey’s speech after receiving the Cecil B. DeMille Lifetime Achievement Award. Her speech, given with poise and unforgettable passion, strove to show how vital it is to not let tonight be the end of speaking out. She hinted at the work of the Recy Taylor, Rosa Parks, Sidney Poitier and the Time’s Up movement throughout, displaying their prominent importance for a better future for females, specifically those of color. She continues with those who have shared their stories regarding sexual assault, and how harassment and overall mistreatment have ‘empowered’ and inspired her to continue talking. She mentioned her desires and hopes for a new day where #MeToo is not repeated. Oprah’s speech reflected the chance for there to be a new day in Hollywood where women run the show for the first time since its creation. Oprah’s words have sparked the discussion of a potential presidential run, saying she is the voice needed for the world, a strong woman of color who worked from the bare ground up. Overall she helped display with grace and dignity how there is no turning back now that women’s voices are being heard for once.

The awards displayed a chance for a new Hollywood, but an issue still lies with men only walking the walk, not talking the talk. Not a single man mentioned the #MeToo movement or Time’s Up during their acceptance speeches. Men not speaking out is a large part of the problem since they are the ones primarily listened to and would greatly assist in ending rape culture and sexual assault. Although not a single man mentioned the #MeToo or Time’s Up movements, actor Sterling K. Brown delivered a touching speech after being the first African American man to win the best actor in a TV drama. He mentions he has benefited through colorblind casting, but he is more grateful for the people in Hollywood writing roles for people of color to purposely fill them, hoping to see an even higher transition to more parts with the description. Not only were the speeches used as tools to regard the topic of the evening, but commercials also profoundly displayed the theme of letting women talk. An ad for the New York Times showed the words, “he said” and “she said” over and over. It ended with a series of “she said” repeated, explaining it’s time we listen to the women speaking out. The commercials like this need to be played not just during the time slot of the Globes but throughout the day, daily.

The 2018 Golden Globes was the first primetime award show since the sexual assault allegations of numerous men in Hollywood were brought forward. The most iconic moments of the evening had to do with the #MeToo and Time’s Up movements, for once not entirely about the awards handed out. Although great recognition and work were done through the symbolism of black at the event, we need the greatness and powerful statements made to continue to every award show in the upcoming season and for years to come, ensuring a potential change within Hollywood and every