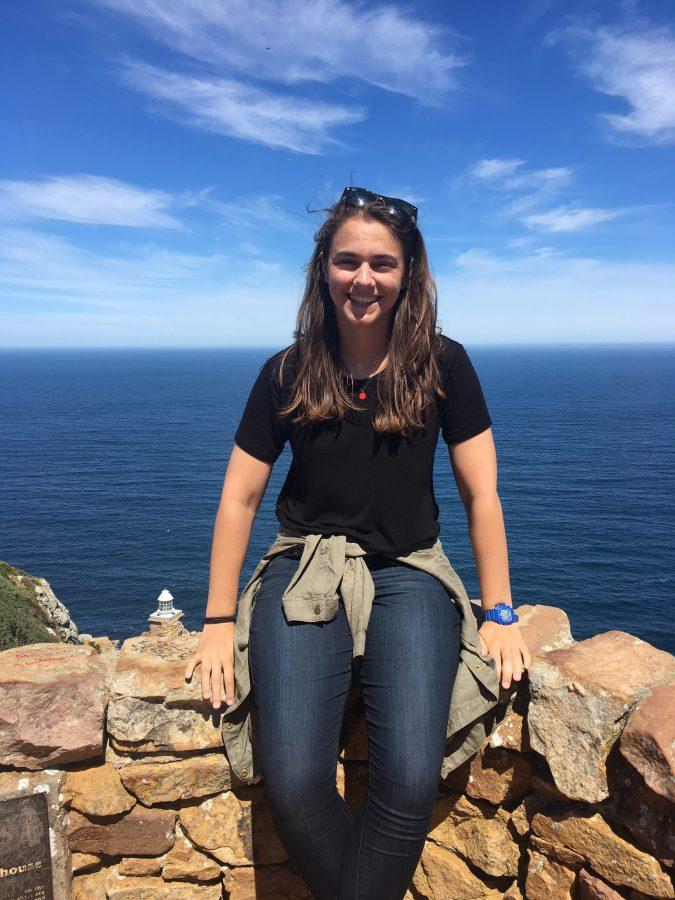 The past few months for junior Emma Butturini have been filled with new cultures, new ideas, research, travel and excitement. Over the summer, Butturini, a biology major from Sarasota, Florida, was accepted to the Amgen Scholars program. She conducted research at the National Institute of Health (NIH) in Bethesda, MD.

Butturini most recently spent the past semester abroad in a multi-country program focusing on public health. She spent one month in South Africa, one month in Brazil, and another month in India. The Old Gold & Black discussed these experience-filled months with Butturini.

What did it mean to you to be accepted as an Amgen Scholar?

I was excited to become a part of Amgen Scholars program because I knew it would be a great opportunity to learn about the behind-the-scenes work in labs, and how the work of dedicated individuals contributes to the alleviation of health disparities.

What was it like working at the National Institute of Health over the summer?

I had a great experience at the NIH this summer. I was part of a group of 20 students in the program; we all lived together and worked at different centers at the NIH. Every week, we attended a lecture by a researcher at the NIH on a different health disparity issue related to their work. Then we had discussions about the contributing factors and potential future solutions. We also spent time  writing a health policy brief which addresses a particular disparity that is related to our summer research project.

It was a very valuable and eye-opening experience to be able to do lab work while also placing it in a larger context of health issues and needs.

What did you do while working at the NIH?

Through the program I was placed in a lab at the National Institute of Nursing Research in the Biobehavioral Unit, in Dr. Wendy Henderson’s lab. I was also paired with a research mentor, Dr. Paule Joseph.

For my project, I analyzed vesicular pathways in overweight versus normal weight participants using nanoparticle tracking analysis. Vesicles have been of interest in recent years as potential vectors for treatments and as biomarkers of disease. They play an important role in cell-to-cell communication in the body, and in the pathophysiological role, they have in a variety of diseases and metabolic disorders. The results from our pilot study may be used to help inform future studies for developing more targeted treatments and interventions for obesity and its side effects.

As for your study abroad experience, what drew you to these countries and this specific program?

I was drawn to this program because of its focus on public health and its emphasis on experiential learning. I also wanted to push myself out of my comfort zone as much as possible and go to places that aren’t usually a part of the normal study abroad experience. The multi-country aspect of the program allowed me to make the most of my experiences and see parts of the world that I’m not sure I would have been able to see on my own in the near future.

I took classes on public health, medical anthropology, globalization and research methods. We were in school from 8 a.m. to 5 p.m. everyday, but we weren’t always in classes. We spent a large portion of our time going on site visits to local hospitals, traditional healers, non-profits as well as exploring the different levels of the public and private healthcare structures in each country.

The other main part of our curriculum was working in case study groups to analyze the different approaches to major public health issues across the three countries. I was part of the infectious disease case study and we looked at the social, cultural and clinical responses to HIV/AIDS in rural and urbans areas of each country.

What aspects of each culture surprised you the most? How did they differ from each other, especially in terms of how they approach health and medicine?

India, South Africa and Brazil are all very different culturally, but it was really interesting to see how their approaches to health and medicine were all affected by their shared histories of colonialism and influenced by changing cultural and political climates. We also spent a lot of time discussing medical pluralism and to what extent each culture allowed for the coexistence of allopathic and traditional medical practices.

What new things were you exposed to?

The list of new things I was exposed to is honestly too long to even begin to describe. There were countless new foods — I used to be a picky eater before, but I can safely say that I am not at all anymore — modes of transportation, music, religious services in Hindi and Xhosa and new host families to get to know everywhere we went.

It’s hard to say, but I think I would have to pick my trip to the Golden Temple in Amritsar, India with a few other people from the program. It’s one of the oldest Sikh gurdwaras. It was about a ten hour train ride away from where we were based in Delhi. The temple is plated with gold on the outside and sits in the middle of a small lake. Even though we waited in long lines on a very hot day, once we got to enter, the interior of the temple is almost indescribably beautiful — some argue that it is even prettier than the Taj Mahal. In another hall at the golden temple they serve free hot meals to everyone, called langar, which we had the opportunity to participate in. It was amazing not only because we were welcomed so warmly into the community, but also because the meal was delicious and it’s incredible to see what a feat it is for the volunteers to serve this meal to over 50,000 people a day. It consisted of roti, daal (lentils) and kheer (rice pudding); it was definitely one of the best meals I had during my entire time abroad.

Most people spend their semester abroad in one place. What did you like about being in three countries in three months?

I liked that we were able to gain such a huge variety of experiences by going to several different countries. Even though it often felt like we left a place as soon as we were starting to get comfortable, last semester certainly taught me how to navigate unfamiliar situations, be more flexible when things don’t go as planned and explore new places more confidently.