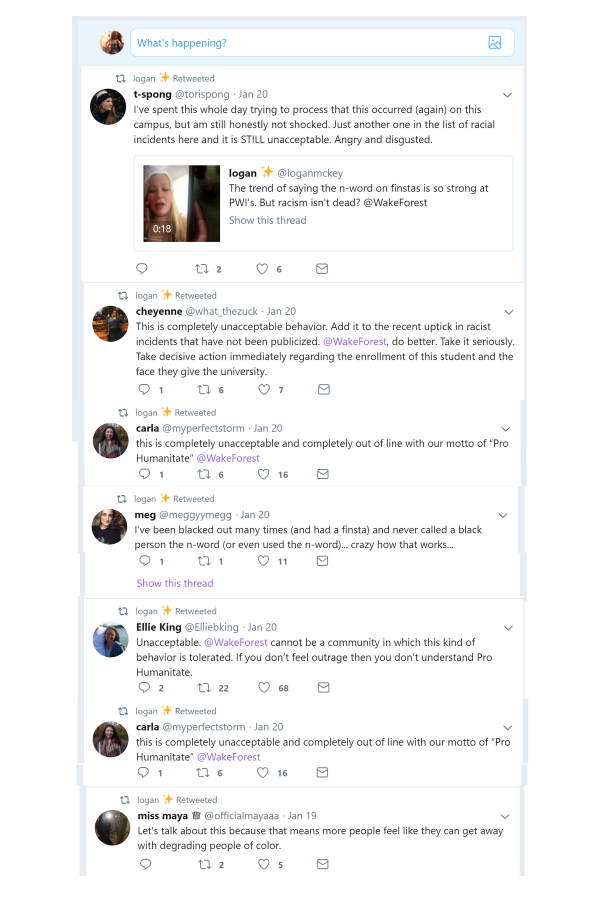 This is what former freshman Kara Nelson said in a video that she posted to her private Instagram account on the night of Thursday, Jan. 18.

The next evening, at 11:13 p.m., a recording of Nelson’s video was posted to Twitter by another Wake Forest student, freshman Logan Bolton. In her tweet, Bolton, a black student, added the comment, “The trend of saying the n-word on finstas is so strong at PWI’s [primarily white institutions]. But racism is dead?” She also tagged the official Wake Forest Twitter account.

According to Bolton, she saw the original post by happenstance. She had heard that Nelson called her black resident adviser a racial slur and went to confront her. When she arrived at Nelson’s room, Bolton said, she was informed by Nelson’s friends that Nelson was at a fraternity party. Bolton then asked the others about the incident, who showed Bolton the Instagram video.

“I was really outraged by it. Let alone the situation, but the fact that she posted it herself — like I know she was drunk and might have been not in her right mind — [but] she knew what she was getting into, in some sort of way,” Bolton said.

That’s when Bolton decided to take a record of the original video and post it to Twitter.

“Just reporting it wouldn’t do enough,” she said. “I feel like sometimes when you don’t let the public see it, it’ll get overshadowed or it’ll never come back out.”

Bolton’s tweet quickly gained attention and circulated around the Wake Forest community. As of 12:20 a.m. on Jan. 25, the original tweet had 310 retweets and 301 likes, and the video had 33,000 views. Many people responded to the tweet, calling it unacceptable and tagging the official Wake Forest Twitter in a call for action.

Bolton is thankful that her tweet got the attention it did because it brought awareness to the situation.

When reached for comment, Nelson said she would call back but never did. Nelson’s former RA declined to comment, citing legal concerns.

“I had no intention of making the school look bad; it was more for awareness, because I know social media is a really big activist nowadays,” Bolton said. “If it was gonna go viral and get retweets, that’s the best way for Wake Forest to see they need to do something about it besides just give her a slap on the wrist.”

What these users might encounter on social media is often race-related. According to the Pew Research Center, roughly four out of ten users say that “at least a few of the posts they share” are related to racial issues or tensions.

In addition to potentially-sensitive racial posts, social media has another effect: its endurance.

Even though the video was posted to a “finsta,” it did not stop it from circulating.

“I think that social media is the best consequence because it sticks with you forever,” Bolton said of her decision to post the video on Twitter.

Incidents like this one are not new to college campuses. A week prior, a female student at the University of Alabama was expelled for posting videos to social media in which she profusely used the n-word.

At Wake Forest, the majority of the population is white. According to 2016 fact-finding by the Office of Institutional Research, 71.5 percent of Wake Forest undergraduates were white, while only 6.7 percent were black or African American.

In her reasons for posting the video, Bolton cited this disparity and her desire for the consequences to be visible to other students.

“The majority of this school is caucasian, which is fine, but you can’t expect to be racist and it to go by. A lot of people might have the same views, but this school is not going to condone it, not going to accept it,” Bolton said. “That’s the Wake Forest I decided to come to.”

On Saturday morning, Penny Rue, the Vice President of Campus Life, sent out a campus-wide email addressing the video.

According to Rue, Campus Life staff were alerted of the video, which she called “deeply troubling,” through the university’s bias-reporting system. At that time, Rue stated that they were engaged in discussions with individuals in order to gather details on the incident. Simultaneously, the official Wake Forest Twitter responded to individuals who had tagged them in tweets about the video by saying, “We are taking this matter seriously and conducting a thorough investigation.”

Bolton believes that had she not intervened, the incident may have never been brought to such attention.

“I don’t think [the RA] is a very problematic person, so I think she just wanted to drop it, but that’s not who I am,” she said. “I really just wanted to make it known that Wake Forest is a school that does not condone racism.”

Nelson, like many other female freshmen, had recently completed the formal recruitment process for sororities. She had received and accepted a bid from Delta Zeta. However, when the executive board of Delta Zeta, including president Kelly Andrew, were made aware of the incident, they took immediate action.

Andrew described the values of Delta Zeta as greatly different from the values that Nelson presented in the video.

“We condemn the discriminatory and hateful languages used in a video posted by a former new member of Delta Zeta, as these actions are inconsistent with our founding values that we strive to uphold every day,” Andrew said. “We took immediate action upon learning of the situation and this individual is no longer a member of Delta Zeta because we do not tolerate any form of discrimination.”

By Sunday, Jan. 21, Nelson was not only no longer a member of a Greek organization, but also of the greater Wake Forest community, according to an email sent to students by President Nathan Hatch. After taking the opportunity to affirm Rue’s previous statement that “racist and discriminatory behaviors are not tolerated,” Hatch went on to say, “We are committed to building a welcoming community in which all members are supported, and in which dialogue and understanding prevail.”