Marchers Rally for Women at the Ballot Box 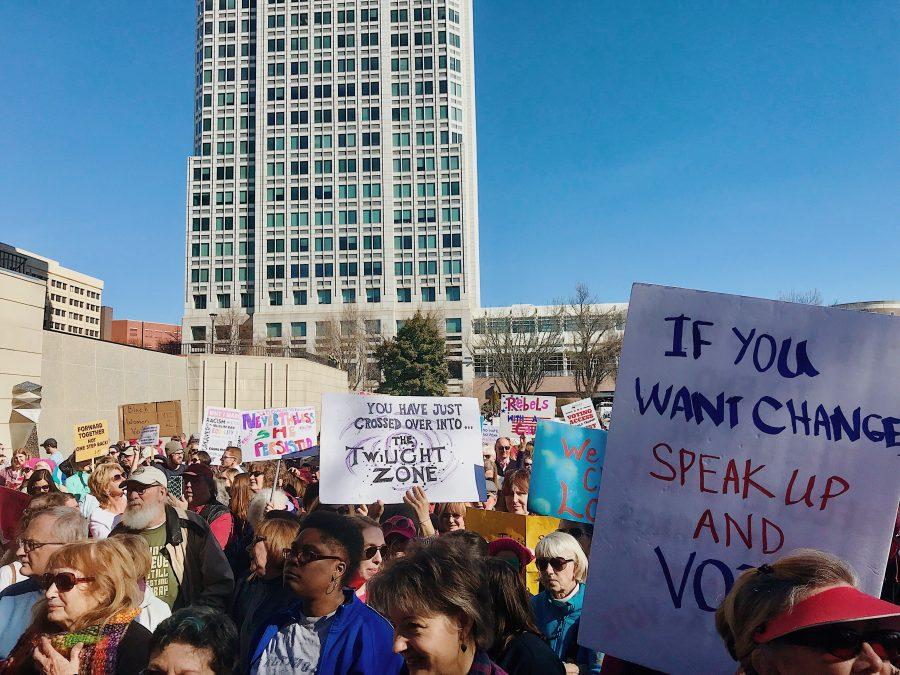 Teeming with familiar pink hats, posters demanding equality, waves of marchers, loud chants and prominent speakers, downtown Winston-Salem resembled dozens of other American cities as the 2018 Women’s March commenced on Jan. 20. A year after the historic women’s marches that followed the inauguration of Donald Trump, the March in Winston-Salem looked similar to other marches in the country, but had one specific difference. The difference lay in the name of this march in particular: The 2018 Triad Women’s March on the Polls.

“We need women and women-friendly candidates to run for and win elected positions on the local, state and national levels,” stated the March’s website. “Access to the polls is increasingly endangered — and because the courts repeatedly smacked down the North Carolina General Assembly’s wildly racial and partisan gerrymandered districts, legislators are returning to Raleigh this month to undermine the judicial system’s check on its power.”

This March in Winston-Salem had similar goals to others, but placed stronger emphasis on the need to both get individuals to the polls and to also ensure that every citizen can vote without restrictions.

“In New York, the protesters were fighting for numerous issues from LGBTQ rights to immigration reform,” Syed said. “However, nobody addressed how to actually make a change. At this March there were numerous volunteers signing people up to vote for midterm elections and educating the protesters that to promote change, they must vote in the upcoming elections.”

Organizers from the League of Women voters and Democracy North Carolina had booths set up to register voters in North Carolina and to ensure that previously-registered voters were still able to vote in upcoming elections. In addition, there were also candidates for Congress, campaign volunteers and local activists whose goals aligned with those of the Women’s March.

Among these community organizations was Wake Forest’s chapter of the Young Democratic Socialists of America. Sophomore Rance Orrell began the chapter at the beginning of the fall semester and decided to bring their chapter to this March to initiate conversations with other activists.

“We knew that the Women’s March was going to be a space for a lot of left-of-center groups and individuals to congregate and air their grievances about the current administration while voicing support for a variety of liberal and progressive causes,” Orrell said. “We wanted to engage as many of those folks as possible and to offer them a truly intersectional alternative to the Democratic Party machine.”

While the League of Women Voters registered over 30 women to vote, and while the streets of downtown Winston-Salem were filled with hundreds of marchers, some attending the rally still found inherent issues with this movement.

“I was upset by the lack of diversity at the march,” Syed said. “There were only a handful of people of color which is not indicative of the Winston-Salem population.”

The issue of intersectionality was one that came up repeatedly throughout the day; this is the idea that feminism must include all women — not just white, straight, cisgender, wealthy ones. Many women of color shared their grievances with other Women’s Marches around the country for the same exact reasons.

“Although we’re obviously aligned in our opposition to Trump, our values and goals are really very different,” Orrell said. “The organizers of this March refused to include any transgender individuals on the speakers list and actively resisted the inclusion of other prominent issues such as Black Lives Matter and Deferred Action for Childhood Arrivals (DACA.) As Democratic Socialists, we believe that you can’t separate racism from sexism or sexism from classism.”

While these issues were apparent and shared by many attending the Women’s March on the Polls in Winston-Salem, the goal remained the same: to get women and all voters engaged in the political process by voting and running for office. Linda Sutton, an organizer for Democracy North Carolina and a speaker at the event repeated popular chant during her speech to the crowd.

“When our democracy is under attack, what do we do? We stand up and we fight back,” said Sutton. “But most importantly, we vote.”