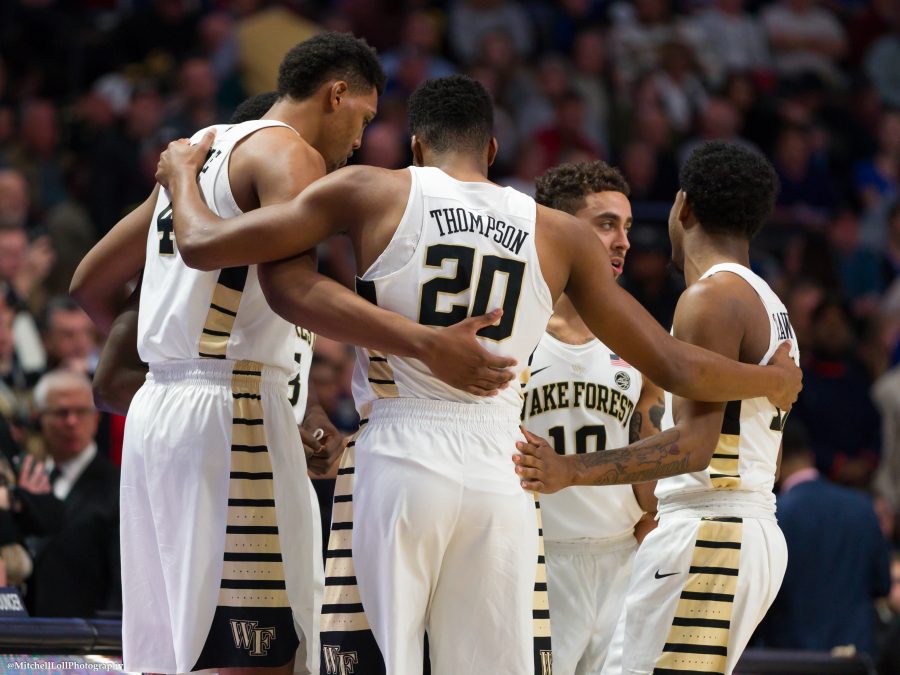 Just 10 days separated the two meetings between Wake Forest and Duke this season, with the second coming in Winston-Salem on Tuesday night, in front of what was likely the largest crowd of the season.

Many aspects of the two games were similar: No. 4 Duke attempted a lot of free throws, many, many free throws. And the Deacs struggled to recover from late first-half runs from the Blue Devils.

Despite the 14-point loss, Wake Forest demonstrated some improvement, especially against the Duke frontcourt, which many consider to be the best in college basketball.

Junior Doral Moore had one of his best games as a Demon Deacon, scoring 18 points and grabbing 12 rebounds on a perfect 9-9 performance from the field.

Moore, who played limited minutes in the season’s first game against Duke, played 30 minutes on Tuesday evening, staying out of foul trouble early in the game.

For Wake Forest to be competitive against a frontcourt like Duke, Moore’s presence was imperative, a fact the junior was not shy to admit.

“For us to have a chance to win, I have to be on the court; I can’t make stupid fouls.”

In a game where Wake Forest committed 15 first-half turnovers, six of which came from starting point guard Bryant Crawford, few positives could be taken away from the offensive performance outside of Moore’s stellar night.

Two individuals in particular were impressed with the play of the 7-1 center from Atlanta, GA, one of whom was a Hall of Famer, the other, his former roommate.

John Collins, Moore’s former roommate, was in attendance on a night off from his day job with the Atlanta Hawks, sitting with Hawks owner and Wake Forest alumnus Mit Shah (’91) next to the Demon Deacon bench.

“Moore is getting better and better,” said Duke’s Mike Krzyzewski. “He had a sensational game.”

Collins, the 19th-overall pick in the 2017 NBA player draft, was the first one who congratulated Moore when he checked out for the final time.

“He told me he’s proud of me,” Moore said of his exchange with Collins at the end of the game. “It means a lot to me.”

After falling behind by 20 early into the second half, Wake Forest managed to fight its way back into the game despite missing a chance to cut it to a seven-point deficit when Olivier Sarr’s dunk bounced off the back of the rim with 10:44 left to play.

When Moore was sent to the bench in the second half with foul trouble, sophomore Brandon Childress stepped up and led the Deacs with three second-half three-pointers. Childress, who played 35 minutes off the bench, reached a new career high in minutes played, and possessed a competitive edge that the Deacs desperately needed to prevent the game from getting out-of-hand.

Ultimately, it was the run Duke made in the first half that prevailed them to victory, as it was too much for Wake Forest to overcome.

The Demon Deacons now drop to 8-12 (1-7) and will travel to Louisville on Saturday to face a Cardinals team that ranks second in the conference standings.

For the Deacs to pull off the road upset, they will need Crawford to play like the best version of himself, which has been missing for quite some time now.

Moore will need to continue to be mindful of his foul situation and Chidress will need to translate his second-half performance into a two-half affair at the KFC Yum! Center against Louisville.