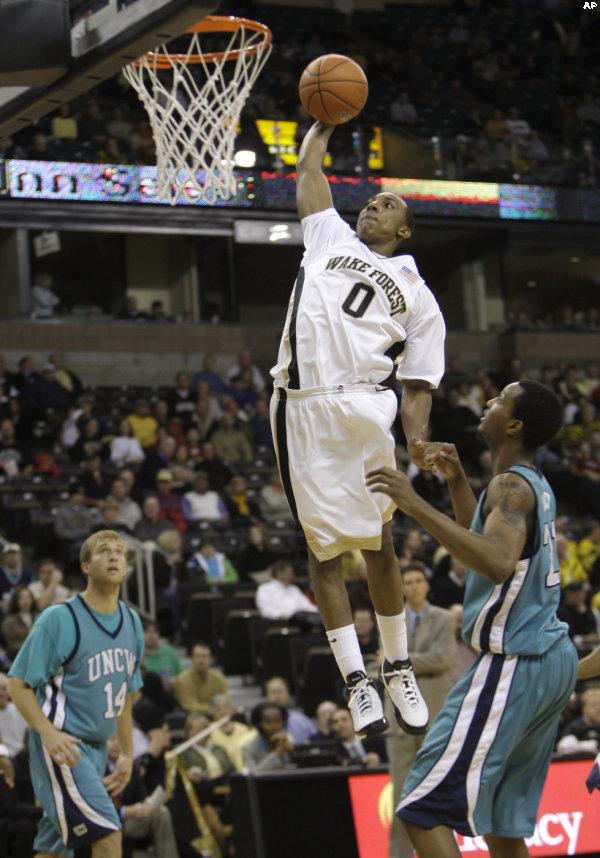 When Wake Forest played at Boston College on Saturday, Jan. 6, the Old Gold & Black had the opportunity to catch up with former Demon Deacon and current point guard of the Minnesota Timberwolves, Jeff Teague. The former Wake Forest standout was in town, and he took on the Boston Celtics on Friday, Jan. 5.

As a freshman in 2007–08, Teague was second on the team in scoring, with 13.9 points per game, just behind fellow freshman and future NBA standout James Johnson’s 14.6.

As a sophomore in 2008–09, Teague became the first Wake Forest All-American since Chris Paul in 2004–05, and the 13th in school history. He was selected as a finalist for the Bob Cousy Award, the John Wooden Award and the Oscar Robertson Trophy.

Teague led the Deacs to a ranking of No. 1 in the country during his sophomore season, which included wins over Duke and North Carolina. His 34 points against the Tar Heels is one of the best performances against a team coached by Roy Williams.

After the conclusion of his sophomore season, Teague declared for the NBA Draft and was selected 19th overall by the Atlanta Hawks. While in Atlanta, Teague led the Hawks and was an NBA All-Star selection in 2015, joining Chris Paul and Tim Duncan to give the Deacs a league-leading three selections in the same year.

Teague spent the 2016-17 season with the Indiana Pacers before signing a three-year contract with the Timberwolves before the 2017 season.

The Old Gold & Black thanks Teague for his time and hopes he will find his way back to Winston-Salem for the first time in what the guard says has been a long seven years.

KYLE TATICH: What stand out as some of your favorite memories at Wake Forest?

JEFF   TEAGUE: Great school, but as far as basketball, what stands out was the chance to be the number one team in the country and beat [North] Carolina and Duke [in 2009].

KT: With 34 points in a win against North Carolina in 2009, was that your favorite game as a Demon Deacon?

JT: I actually think my favorite game was when we beat Duke my freshman year because we were not expected to beat them.

KT: Being ranked number one in the country and having a few players join in you in pursuing successful NBA careers, what was it about the team’s chemistry in 2009 that made the group special?

JT: It was a lot of fun. We had a lot of talented players, and our coach (Dino Gaudio) was pretty cool. Everything was going well, we just didn’t end things how we would like, but for the most part, I think we had a really great season, we all got along and still stay in touch.

KT: Off the court what comes to mind as some of your favorite memories?

JT: Just going to the Pit and hanging out with the football players at that time. Aaron Curry was there and was a really funny guy. I used to get Chick-fil-a all the time too at Benson with the guys.

KT: I know there are a lot of different faces associated with the program now, but do you keep up with Wake Forest basketball program?

JT: It’s been a while but I try to keep up and watch them as much as I can. I know they are playing here in Boston tomorrow.

KT: You and John Collins have a couple things in common. You both left after your sophomore year and were selected 19th overall by the Atlanta Hawks. Have you watched him play much this year and what has impressed you about him?

JT: Yeah, I thought he was going to wear number zero — that would have been cool. I haven’t talked with him yet since we haven’t played them yet. He’s really good, plays hard, athletic. I was impressed with what he was able to do last year at Wake Forest.

KT: You’ve spent some time out this year due to injury, what is it like being on the bench during a game, especially in an environment like TD Garden during a close game?

JT: I have fun with it and try to talk trash with the other team. I try to get the guys going.

KT: What are your goals here in Minnesota both individually and for the team?

JT: I have put personal goals to the side — that was when I was younger. Now I just want to win and do something this franchise hasn’t done in a while — make it to the playoffs. That’s our goal and what we strive for everyday.