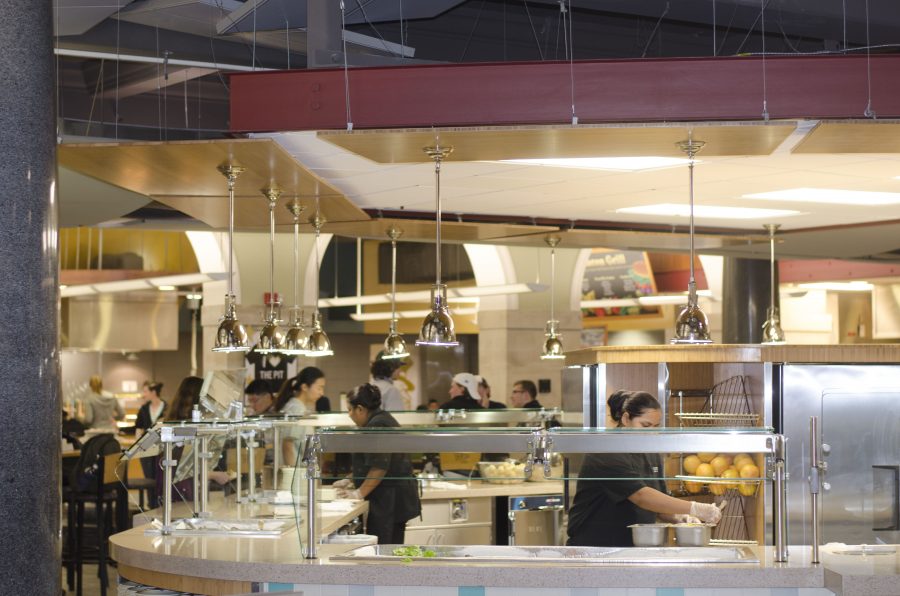 With the completion of the North Campus Dining Hall in 2014 came an unforseen issue that sparked a delicious debate as divisive as vanilla vs. chocolate. The question is: Old Pit or New Pit? Which dining hall is better? No student has dared to tackle this question objectively up to this point, so that is why it is time to examine the evidence from both sides.

To gather some preliminary input on this issue, I asked  several students to tell me their Pit preferences. The question was: which Pit is your favorite and why? When I reviewed the responses from this small sample of students, I found that they were divided half and half between lovers of the New Pit and lovers of the Old Pit.

Senior Alice Pauly, a fan of the New Pit, said, “[New Pit] has a better setup and atmosphere.”

Sitting next to Pauly was senior Caroline Perkins, who told me that she had not been to the New Pit at all this year. “I like the increased freedom of the Old Pit,” Perkins said.

Other students agreed with Perkins, and praised the Old Pit for its larger quantity of food options and its all-you-care-to-eat policy. This is opposed to New Pit’s all-you-can-fit-on-one-plate policy, which senior Victoria Grace said, “is too much pressure.”

Even junior Madison Bragg, who goes to the Old Pit more frequently, said, “If it were closer to my dorm, I would go to the New Pit for the better food.”

But does the New Pit really serve higher quality food? To answer this question, I had to perform a blind taste test. So I got two to-go boxes, one from each dining hall, and made my way to Babcock Residence Hall where I met freshmen Jarod Koenig and Lucy Peterson who agreed to take part in the experiment. Neither of them had eaten at the dining halls that night, so they had no idea what was on the menu.

I presented each of them with what I thought was a typical plate of food from each dining hall consisting of a pasta salad appetizer, a chicken entrée and cupcake dessert. I labeled the plates “A” and “B” to hide the identity of their origins. The participants rated each component of the plates on a scale of one to five (one being very bad and five being very good) on the criteria of taste and appearance.

Here are the results by category:

In this category, the Old Pit offered a penne pasta salad with broccoli and Roma tomatoes, while the New Pit prepared a bowtie pasta with alfredo dressing, bacon and peas.

It’s too close to call, especially based on the small pool of results I gathered here. So the debate goes on: Old Pit or New Pit? My answer: they’re both great in their own way. Nonetheless, we can all agree that the hard-working and friendly staff of each dining hall make eating at Wake Forest a terrific experience. They all deserve a 5 out of 5.