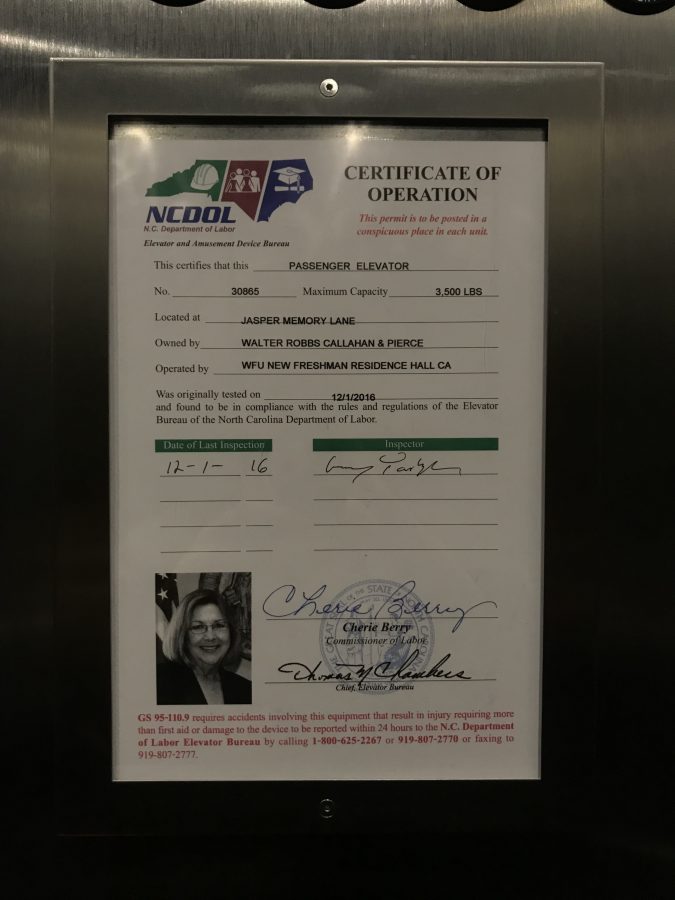 If you’ve been in any elevator in North Carolina, I’m sure you’ve seen the picture of the woman in the elevator. That woman is Cherie Berry, North Carolina’s beloved Elevator Queen.

Berry is North Carolina’s Commissioner of Labor — and she has been since 2001. She was the first female Commissioner of Labor in North Carolina, and I think I’ve found her key to success and re-election: elevator magic, baby. When you see Cherie Berry’s face in the elevator, and you think about how much you’d hate to take the stairs, of course, you start to feel indebted to her. I mean, the woman practically invented the elevator (well, not really, but she invented putting her picture in all of them, so that’s practically the same thing.) She made it law for every elevator to have a plaque and picture dedicated to her, and if that doesn’t scream “lady boss” to you, nothing else will. I mean, when will your icon EVER!?

Commissioner Berry has a cult following as well, and she is loved all across the grand ole state of North Carolina. There are songs about her, t-shirts and even a spoof twitter account dedicated to her, @ElevatorQueen. Phrases such as “She Lifts Me Up” and “Levels” are used to represent the iconic Commissioner Berry. Seriously, if you ever need a laugh, look up the song “Cherie Berry” by Alternative Champs or “Cherry Berry [sic]” by Tha Commissioners. I promise, you’ll be singing the lyrics, “Cherieee, Cherie Berry picks me up and lifts my feet off the ground. Cherieee, Cherie Berry gets me high and never brings me back down, ” for days on end.

According to Alternative Champs, Berry’s job is “making sure that we can all get high.” In the elevator, of course.

The Elevator Queen has embraced her rightful title; in fact, this title and elevator magic is what has gotten her continuously re-elected and will probably continue to do so until she rides that elevator all the way up to heaven. Led Zeppelin was wrong — there isn’t a Stairway to Heaven. There is an elevator, and Cherie Berry’s face is right on the wall.

Cherie Berry is an icon. Not only has she mastered free campaigning via North Carolina’s beloved elevators, but she also looks pretty fabulous in her photo. According to Alternative Champs, “her golden glasses and her magic smile” are what make her such a beauty.

Next time you take an elevator, make sure to bow down to the Elevator Queen.

Never forget, no matter how lonely and low you feel in life, Cherie Berry will always, without fail, be there to lift you up when you’re down. That is, as long as there isn’t a fire or power outage.