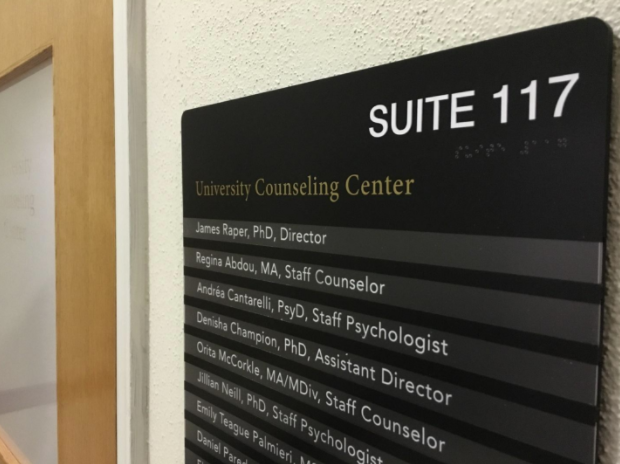 An uncomfortable silence lay about a warm, carpeted Wake Forest conference room, as a growing body of men took their seats at a circle of tables. Some carried in stacks of chairs, after a standing crowd began to build at the door, chattering quietly.

It did not seem that anyone expected so many fraternity men to attend a university panel on male suicide.

The Student Mental Health Ambassadors are a group of P.E.E.R.S.(Peers, Educating, Engaging, Reaching, & Supporting)-educated students who seek to raise awareness of mental health issues on campus, while standing also as a resource for students who seek peer counseling.

It was the Student Mental Health Ambassadors who, with the help of Raper, hosted the panel on male suicide.

“First and foremost, we try to bring the topic of mental health to Wake Forest,” Kathryn Repp, the group’s president, said. “We want to improve the wellbeing of students and encourage students to get help if they need help.”

Each ambassador is equipped to handle emergency situations like engaging with students at-risk for suicide. As a body of students, they can appear to be more approachable to some than the professionals in the counseling center. Ultimately, their goal is to have those students feel comfortable with seeking help from a trained counselor.

The panel, led by counseling center head James Raper, covered identifying red flags among friends, talking to others about mental health, and encouraging the use of university resources for wellness.

Nationally, suicide is the second-highest cause of death among college students. According to the Center for Disease Control and Prevention, just over 20 percent of fatalities in 2014 among Americans aged 15-24 were self-inflicted. The data reflects suicide rates at a nationwide high of 30 years.

More locally, Raper says that in his 15 years of experience, white fraternity men at Wake Forest tend to raise red flags relating to suicide the most.

“I work with men and the issue of mental health on a daily basis,” Raper said at the panel. “At this campus, my highest risk population are you all.”

The news produced a few confused looks. And yet, the room lay quiet still, a product of discomfort surrounding the subject matter.

According to Raper, getting past this discomfort is important when it comes to preventing suicide.

At Wake Forest, data from an Office of Wellbeing survey conducted last April indicated that 35 percent of students were dissatisfied with their emotional health, yet, only around 14 percent of students make use of the Counseling Center. Raper attributes some of this gap to a stigma that prevents some students from seeking help.

“If we don’t feel like we can say things out loud, then we keep them as secrets,” Raper said. “I think we all know, the more we keep secrets about things we could feel ashamed of, the more it eats at us.”

Stigma is commonly associated with mental health, and is one of the highest hurdles that the university must clear in its efforts to help students. If there is a shame associated with seeking help, students who need it are less likely to ask.

When prompted with a blind survey from the Office of Wellbeing, just under 5 percent of Wake Forest respondents expressed feeling symptoms of depression on a daily basis. These students are, among others, vulnerable students that must overcome stigmatized symptoms of mental illness to seek help.

“When we talk about risk, we talk about danger to self or others,” Raper said. “We evaluate risk in terms of the choices they’re making that could lead to them putting their safety in danger.”

The university hopes to learn more about the mental health needs of students this semester through students’ responses to the National College Health Assessment.

The counseling center has about 14 percent of the student population utilizing its services, which is an increase from previous years and a sign that students may be getting more comfortable talking about mental health.

“We experienced a big sea change around the fall of 2014,” Raper said. It was at this time that Wake Forest was coming to grips with the death of a student, along with an unprecedented volume of students seeking appointments.

In response, the University Counseling Center strengthened its service to patients by increasing availability. Students can now reach a trained counselor at any time through the counseling center phone number.

The number can put students in contact with a professional counselor at any time of the day, on any day of the year. Counselors answering the phone are trained in identifying red flags with questions pertaining specifically to students at Wake Forest.

For someone in the midst of a suicidal crisis, a lonely minute can feel like an eternity.

“I sat on my bed, and for about five minutes in that moment, I really felt like there weren’t many options left for me,” one Wake Forest student said, who at one point attempted suicide and chose to remain anonymous while discussing this topic. “I remember wondering if this kind of pain would go on forever.”

Raper says that suicidal crises don’t typically last very long. While it is possible for someone to be chronically suicidal, most people with suicidal ideations will experience them for only a day or two. Intervention from a friend or a professional can often save a person’s life.

“Suicidal ideation is not about wanting to die,” Raper said. “It’s just the brain doing problem-solving. What they want is to stop feeling the pain that they’re in.”

“I know now that it gets better,” the student said, who also said that sharing their story with close friends has helped with processing the event.

For this reason, therapists at the counseling center know that reducing the impact of stigma can help students manage such crises.

With resources ahead of the curve for addressing mental health issues on campus, Wake Forest has turned to students to help in reducing stigma and encouraging use of those resources.

The program, founded in 2016, has begun to contribute to the campus dialogue through involvement in a series of events during Men’s Mental Health Month and in providing care packages during finals weeks for stressed students.

Repp and other members of the program are aware that for the university, outreach among students can be an effective tool for helping those who struggle with mental health issues in comfortably seeking help.

“We have students who are a bit nervous to go to the counseling center,” Repp said. “[Mental health] is kind of a scary topic to talk about, but the reality is that our counseling center is phenomenal. Sometimes it’s hard to get someone to go, so we can provide some baby steps towards that.”

For the same reasons that Student Mental Health Ambassadors can raise awareness on serious topics like suicide, Repp also advocates for other campus organizations to encourage openness among themselves — anything to help get people to talk with a professional.

By having a counselor always at-the-ready, students at Wake Forest always have someone to talk to.

“We as human beings get really frustrated when there are things that affect us that we feel that we don’t have control over,” Raper said. “Mental health is something we do have control over.”