The Grammys: A Night of Grandeur and Groove 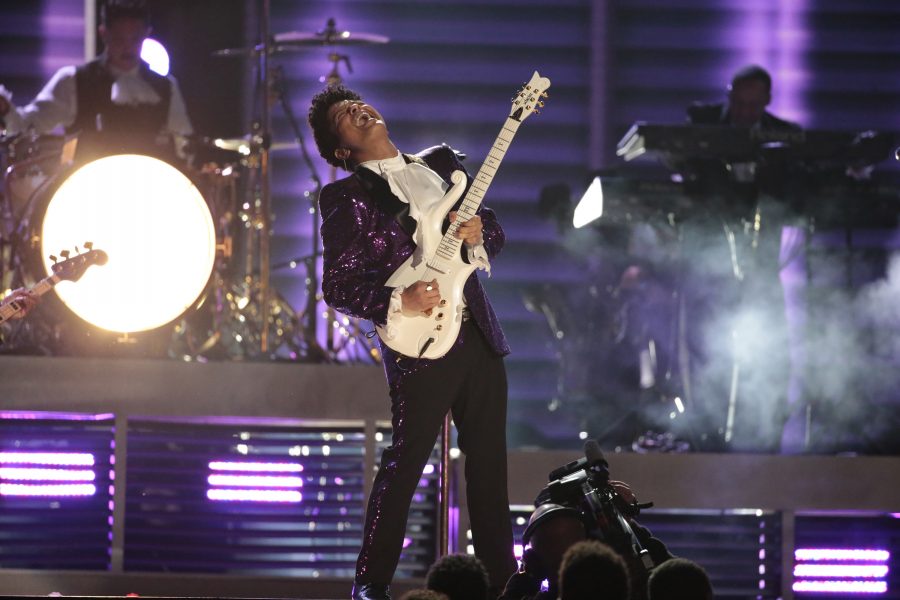 Just like that, the 60th annual Grammy awards are over. As one of the busiest nights of the movie industry closes, we are all left pouring over the results, seeing who got their due praise, who got snubbed and who came out of left field.

With Jay-Z entering as the favorite of the show, boasting eight nominations — the most of any nominees — he quickly faded when compared to the likes of Kendrick Lamar and Bruno Mars. Lamar swept the Rap category, taking home the awards for Best Rap/Rap and Spoken Performance for “Humble” and “Loyalty,” respectively, as well as Best Rap Song for “Humble” and Best Rap Album for Damn. Bruno Mars stole the show, clearing three of the four general awards for Record of The Year, Album of the Year and Song of the Year for 24k Magic and “That’s What I Like,” respectively, as well as Best R&B Performance and R&B Song (both for “That’s What I Like”) and Best R&B Album, again for 24K Magic. Jay-Z, the Grammys Elder and most-nominated artist, went home empty-handed. Lastly, out of a competitive category for Best New Artist, Alessia Cara stood out amongst the rest, beating out charismatic and captivating artists such as Khalid, Lil Uzi Vert, SZA and Julia Michaels.

In addition to the awards themselves, the Grammys have often been a venue for musical artists often cited as some of the most subversive and political public figures, to have their voices heard. They also receive praise for their work, which for many comes from places of passion, activism and self-experience. In as tumultuous of a time as we are currently in, many may criticize artists for using events such as the Grammys as their own “political soapbox.” However, I would posit that everything these artists do, everything they stand for, is inherently political. In a day and age when the transparency of social media, the criticism of activist movements and the pervasive distrust of those who shake the status-quo permeate our society, many artists may feel that it is their responsibility to use their power to say something worthwhile. Many of the evening’s performances reflected this notion. From the white outfits displayed proudly during the pre-show red carpet as signs of solidarity to those of the #MeToo and Time’s Up movements, to the iconic and dramatic opening performance by Kendrick Lamar, the political tension at the event was tangible even through a screen.

Following Lamar’s performance, Lady Gaga took the stage in a brilliant white gown, performing the ballads “Joanne” and “Million Reasons” on a white piano, draped in the wings of an angel. She ended her performance with the single ultimatum “Time’s Up.” Ostensibly this is in reference to the Time’s Up movement, founded in early January as a response to the Harvey Weinstein controversy as well as the burgeoning #MeToo movement. Many other artists wore white and/or white roses as a show of solidarity with the victims of sexual assault and harassment in the entertainment industry.

Finally, talk of diversity at the awards show, the history of which has been abysmally white and male, has not ended. With both Drake and Frank Ocean vocally criticizing the show for its lack of black representation and the rampant under-representation of female artists, it’s easy to see how award shows such as the Grammys (which aim to represent the pulse of a modern America) are giving rise to protests and boycotts. Lorde, for example, the only female artist up for Album of the Year, declined to perform during the show. Sources cited that this was because she was asked to perform with other artists whereas other Album of the Year artists (all conveniently male) were granted solos.

In all, the Grammys, like every award show, are only as powerful as people believe them to be. With new methods of attaining fame such as YouTube and SoundCloud, historic institutes in industries like music and film will have to work harder to modernize and respond to an increasingly diversified population. Until then, the Grammys will have to do. At least they know how to put on a good show.