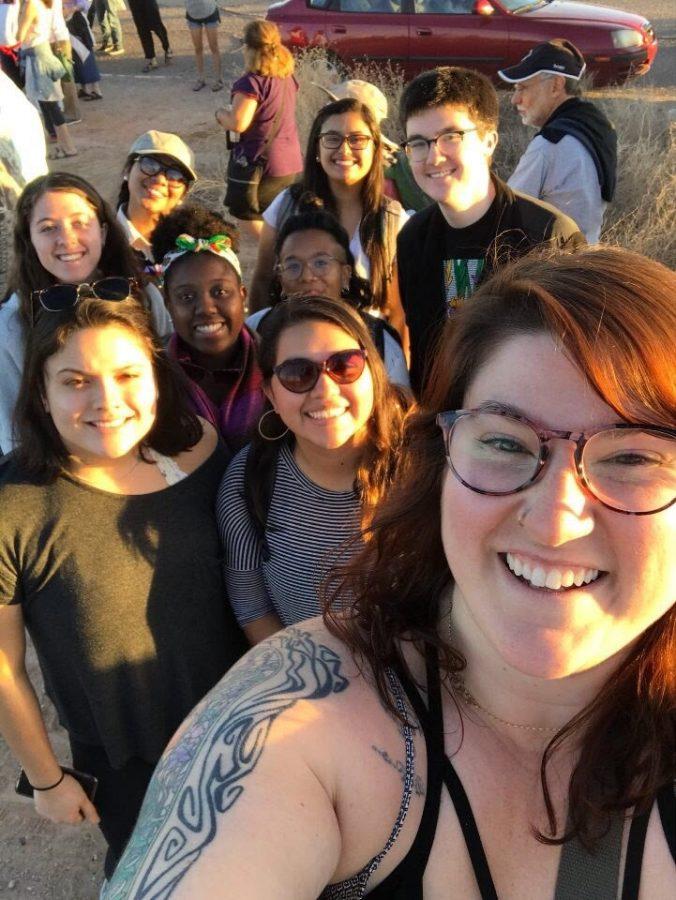 Liz Orr is the Coordinator for Catholic Programming out of the Office of the Chaplain. She is originally from outside of Boston, where she earned her Masters of Arts in Pastoral Ministry from Boston College School of Theology and Ministry.

She has led many Interfaith Wake Alternative Break (WAB) trips in her time at Wake, and is known by many on campus both for her own presence and for her dog, Olive, who is nearly always with her.

What is your main role on campus?

I am the Coordinator for Catholic Programming out of the Office of the Chaplain. I oversee and provide program guidance to the Catholic community, provide pastoral support, event coordinating, leadership development, mentoring and crisis response.

You’ve taken students on several Wake Alternative Break (WAB) trips in your time at Wake? What has that experience been like?

I have been on a couple of trips over spring break where I have taken students to New Orleans, Washington DC, Arizona and this spring break we will be going to Atlanta. All of those have been trips through the Interfaith Wake Alternative Break trip, so exploring themes of interfaith cooperation’s in these various communities.

The most recent trip I’ve taken students to is out to Arizona in November to the U.S.-Mexico border to explore issues around immigration around militarization in Latin America. It was really an incredible opportunity.

What is something that you have taken from these trip experiences?

One of the things that I have always experienced when I was a student going on service trips and have even experienced as an “adult” is that there’s always some kind of challenge when you leave your safety zone. When you’re there it’s hard.

Whatever you’re doing, whether that’s service, meetings or seminars, things are going to challenge you, because they’re new and different.

As difficult as those moments can be when you’re outside of your comfort zone and on these trips in a place that’s totally new, that’s still a gift and you’re being invited into some kind of growth and evolution. How you engage with it will determine what you learn from it.

What has been the most rewarding experience working at Wake so far?

How have you seen Wake Forest change in the years you’ve been here?

A change that I’ve identified, specifically in the Catholic community, is that when I came in it was smaller, it was kind of struggling to sustain itself.  There were a lot of reasons for that, it doesn’t fall on anyone’s shoulders, it was just the time and the season.

My approach has been to work with student leaders, who then go out and build the community. I think students respond better to other students. I don’t think anyone wants to hear why I love the Catholic community, I think they want to hear why students love the community they are a part of.

So the changes that I have seen is just the Catholic community grow and sustain itself. And there is a really funny character to it now. It’s a very quirky place and I love that. It feels like people feel safe to be themselves. That is something I have noticed just within my own realm.

Do you have any hobbies now?

I could spend hours in antique shops. I love old stuff. Flea markets are always really fun. I also love swimming. I was a competitive swimmer for most of my life. Not very fast but I had great form and so I always love swimming when I can.

Can you tell me more about your dog, Olive?

I joke that I got her at the discount store. I got her at Forsyth Humane Society. She is belligerent as I am. She is very sweet and loves people. She also loves to ruin my window blinds and be a punk and not listen to me and try to steal dinner when we are eating here. She will always accept affection and attention. When people see me and she’s not there, they are like ‘where’s the dog?’

Any advice you would give to students on campus?

The advice that I would give, and it’s really hard to do, is to bet on yourself. Whether that is trusting your instinct, pursuing what you feel called to do and not the path that’s been laid out before you by someone else, leaving a relationship that doesn’t value who you are, just bet on yourself.

Choose yourself because you are who you have for the rest of your life, and if you can find a way to find your own security and trust in that and bet on that, when you have a hard decision to make, it will lead you in the right direction.