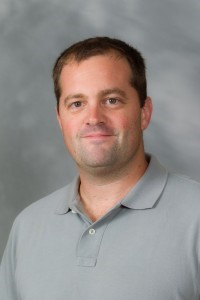 Todd McFall, a Wake Forest economics professor and sports economist, discussed his research on the governance of the National Collegiate Athletic Association (NCAA) as part of the ZSR Library Lecture Series on Jan. 31.

His lecture emphasized the particular governing decisions made by the NCAA and how it organizes its revenue-generating competition and tournaments. McFall discussed the implications, both economic and legal, of decisions made by the governing body that have the potential to damage its future success and viability. Colleges, he said, may soon face competition from up-and-coming leagues that could bid away talented players with the incentive of higher compensation. “My research is a warning shot to the NCAA that history is not on its side here,” McFall said.

The NCAA was founded in 1906 by a group of schools who shared concern about the deaths of football players and wanted to create a rules system to make the game safer. Its other major revenue generator, the NCAA Basketball Tournament, was established in 1939. However, the group of schools quickly ceded increasing amounts of power to regulate their behavior to the NCAA, which was allowed in 1946 to become the central planner of college sports. For example, in 1956, schools granted the NCAA the exclusive ability to control which football games would be televised. This right was dialed back when the schools sued the NCAA and the case was brought to the Supreme Court, after which it lost its monopoly right over televised football.

This circumstance, which established the basketball tournament as the NCAA’s major source of revenue, helped set up the environment that has led to many of the NCAA’s decisions up to today. McFall also cited two sports economists’ theories about how leagues govern themselves. One, Simon Rottenburg, posited that uncertainty matters but markets will determine the optimal uncertainty level; a sports major league must employ the best players, and that rules matter. “There has to be some measure of uncertainty,” McFall said. “I love the analogy that going to a game is like going to a theater but no one knows what the script will be. There has to be some kind of drama, which means that teams must be matched fairly evenly.”

A second, Walter Neale, theorized that a monopoly is a league’s natural outcome.

He added that the ways that the NCAA addresses the problem of uncertainty imply stiff consequences. For example, he noted that while professional leagues use strategies such as revenue sharing, salary caps and drafts to maintain uncertainty despite discrepancies in resources between teams, the NCAA does not do as much to lessen inequality between teams. Indeed, he said that the Basketball Fund, which allocates resources to teams based on how they perform, prevents up-and-coming teams from obtaining much-needed capital.

“I see it as a way for the rich to get richer but not the smaller conferences, who desperately need capital, to keep up with the richer schools,” McFall said. “I see this as a way to keep capital out of their hands. On the margin, the level of productivity of any dollar that flows to a smaller conference is going to be much greater than a dollar the flows to a larger conference.”

Furthermore, he said that the NCAA risks losing talented players because of the limits of tuition-based compensation. Instead, schools use expensive facilities to lure players.

“The capital could be used to pay players, but instead it’s used to buy accoutrements for players so that they’re indirectly compensated,” McFall said.

All in all, McFall’s lecture emphasized that the NCAA’s low compensation for athletes, which looks attractive in the short run, will be damaging in the long run if they start to lose top athletes.

“I find it extraordinary that college basketball didn’t shrug its shoulders and say, ‘We need these people in our league,’” he said.