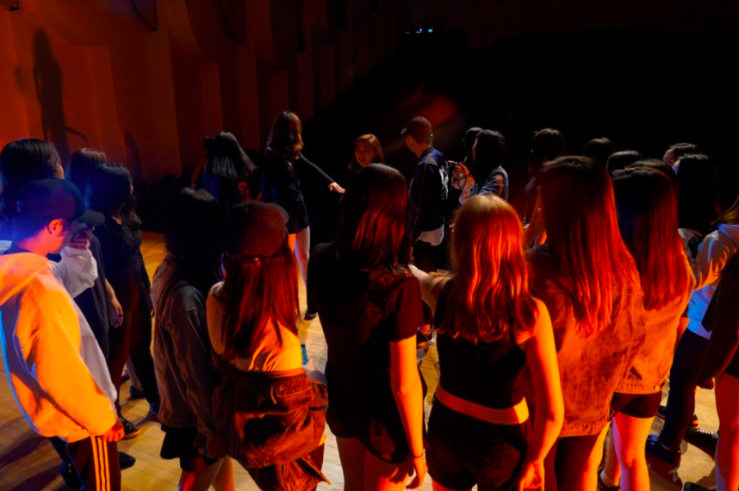 However, Wake Forest’s international dance group, Lost in Translation, has shown the potential for cultural cohesion by acting as a haven for students of different backgrounds. Given the campus’ globalization, the group was formed to help students must form an understanding of each other’s cultures.

Within their first semester at Wake Forest, Ella Bishop from Des Moines, IA and Raymond Yang from Chongqing, China recognized the ethnic division on campus. Many students have attributed these distinct groups to differences within cultural lifestyles.

Wake Forest’s international students have identified “difficulty in making American friends” as a top frustration within their transition to the university.

“A better [cultural] understanding, on both sides, can make those friendships happen,” Kelia Hubbard, the Director of International Students and Scholars, said.

Bishop has become an exception in that, although American, the majority of the friends she has made at Wake Forest have been international students.

“For me, I go out of my way to make friends with international students,” Bishop said, identifying her unique approach to socializing on campus.

Conversely, Yang has not made many American friends within his first semester. He expressed the ease in associating with students of similar backgrounds. Yang identified the main differences he has noticed between Chinese and American cultures at Wake Forest, including party habits, privacy and relationships.

“That’s the reason why American and Chinese students don’t hang out in groups, because our lifestyles are just so different,” Yang said, justifying the composition of his Asian friend group.

One thing that Bishop and Yang do have in common, however, is Lost in Translation. The international dance group holds an integral role within both of their experiences at Wake Forest.

Lost in Translation is designed for any student interested in dance, culture or both. But unlike other dance groups on campus, Lost in Translation does not hold tryouts nor turn anyone away. Most of the members do not have prior dance experience.

The only requirement is “a shared interest and time to commit,” according to Lost in Translation’s Vice President Xu Liu.

“We are trying to expand our influence on campus,” Lost in Translation President Yaxin Wong said.

Lost in Translation’s official roster includes 40 dancers, but the ‘regulars’ are consistently a group of 30 dancers. Its size is comparable to other dance groups on campus, such as Momentum which has 33 dancers.

However, each year the dance group gains more general interest from the student body.

For example, during the past involvement fair, Lost in Translation’s booth was swarming with undergraduates who left two signup sheets and forty names of students interested in getting involved.

While Lost in Translation’s membership is diverse, most of the group’s dancers are Asian women. Minorities within the group include male and American dancers. To recruit diversity, Lost in Translation held a workshop catered to male choreography in September. As a result, Yang joined the other male dancers in the group.

Lost in Translation dances are primarily to Korean pop, commonly referred to as K-pop, music. The group’s dancers perform choreography that they learn from their K-pop ‘idols’ within the industry.

Over the past few years, South Korean bands have gained popularity around the globe. For example, the boy band, BTS, also known as Bangtan Boys or Beyond the Scene, recently entered the American music market by performing at the American Music Awards.

Additionally, famous YouTube choreographers have embraced the genre of music globally, because “Korea is exporting its pop culture really well,” according to Liu.

Currently, the biggest K-pop song is “DNA” by BTS, according to Bishop. As an American student, she knows that the most recognizable K-pop song on campus is “Gangnam Style” by PSY. Bishop listed Got7, PSY and BTS as the most popular boy bands. As for girl bands, Girls Generation, Twice and Black Bank have the greatest influence, according to Bishop.

Lost in Translation’s latest showcase included two dances by BTS, one dance by Kara and an assortment of dances by other trendy K-Pop artists. The group included a dance to Bruno Mars’ 24K Magic, but gave the song an Asian flair by changing the introduction to a Korean version that played while the dancers walked out on stage.

Bishop has listened to K-pop music since her junior year of high school when her ‘fan girl’ friend, who watched K-drama TV shows and knew all the K-Pop songs, introduced her to the genre.

Many people ask Bishop why she likes K-pop music, because she cannot understand the Korean lyrics.

“I don’t need to know because the music speaks to you in way that you get the understanding of it,” Bishop said.

Lost in Translation’s choreographers always teach routines in English, primarily for Bishop. Yet Bishop is reminded of their differences when she hears the Asian dancers speaking or counting steps in Chinese before rehearsal begins.

However, Bishop does not mind the dissimilarities. She has not allowed language to become a barrier within her social life or expression of dance. But many Wake Forest students cannot say the same.

In many ways, Lost in Translation has reversed Bishop’s outlook.

“As an American, you become so acquainted with English. Within this [Korean] culture, I am so in the minority. It’s giving me the perspective of how international students feel [at Wake Forest.]”

Lost in Translation held its first individual dance showcase on Nov. 5th, 2017. The group took hundreds of hours to prepare for the ‘L.I.T. Premier Showcase,’ which occurred in Brendle Recital Hall.

“We prepared 14 dance pieces in two months … that’s never happened in any dance crew on campus,” Wang said. Two years ago, the dance group performed only six dances in its showcase.

This year, Wang designed the showcase to have more pieces with smaller groups of dancers. Ultimately the new design improved their performance because it allowed separate practice times and more focus within each dance, according to Wang.

To prepare for the showcase, Lost in Translation practiced as a full group every Monday and Wednesday night from 8:00 to 9:30 p.m. in Studio 204. As the showcase approached, Wang called for additional rehearsals on Saturday and Sunday as well.

The showcase proved to be demanding in ways outside its frequent practice schedule.

Luckily, the benefits exceeded the costs. Many dancers revealed that the showcase turnout was higher than what they had expected. Bishop estimated around 30 people attended the show, “It was a happy surprise,” she said.

The guests that were scattered throughout the auditorium were a mixture of international and American students.   They sat side by side to enjoy Lost in Translation’s intercultural performance. The showcase became a shared experience with a diverse audience, regardless of ethnicity or language.

Lost in Translation has begun to connect the ethnic divide on campus. However, an inclusive student body will only be achieved if students join those sitting alongside themselves and embrace other  culture. Though small, Lost in Translation’s following has created a community drawn together in curiosity and support. The international dance group has served as an outlet to set aside ethnic divisions and express a collective identity through dance.

With a smile, Bishop added, “It doesn’t matter race, ethnicity or even language … we are all united with dance.”