Week of Sleep Illuminates the Issue of Sleep Deprivation on Campus 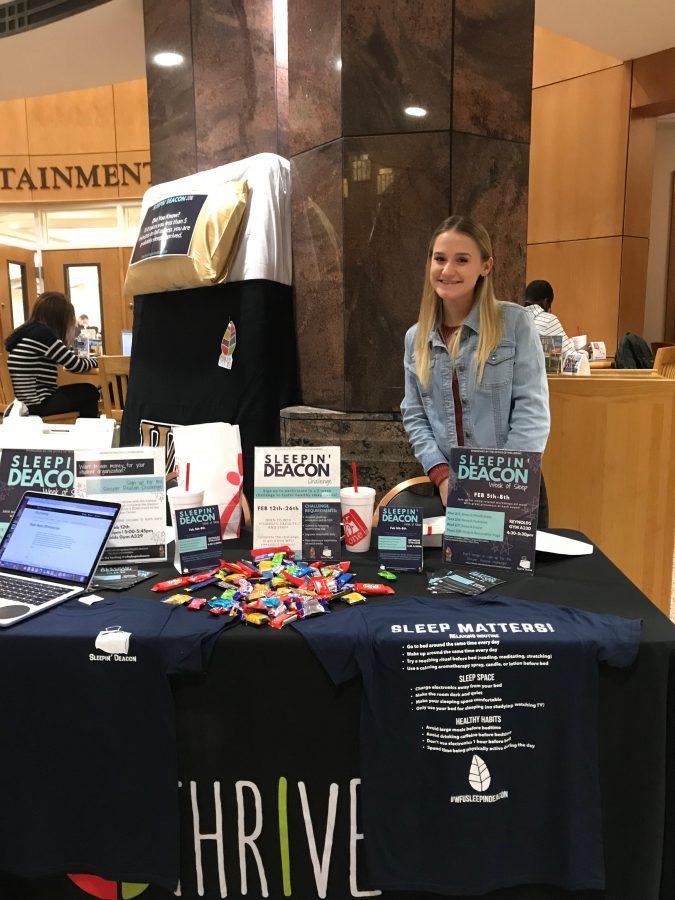 Sleep deprivation is an issue that most students struggle with on a daily basis, but one that has been normalized so much that it is not often spoken about beyond comments of “you look tired” and the frequent observance of glazed-over eyes and the aged neck-jerk indicator of students nodding off in class.

In order to combat the trend, the Office of Wellbeing orchestrated the third-annual Sleepin’ Deacon initiative which  comprised last week’s Week of Sleep and a two-week Sleepin’ Deacon challenge through which many students have pledged to exercise healthy sleep habits and log their sleep quality.

The Week of Sleep included workshops on sleep as it pertains to subjects like mindfulness, nutrition, sound and restorative yoga.

According to a study conducted by the Office of Wellbeing last week through their Sleep Week initiative, members of the Wake Forest community have an average “sleepiness score” of 9.745 — a score categorized as moderately to excessively sleepy by the Epworth Sleepiness Scale.  Those scoring higher than 10 are asked to consider seeking medical attention.

“Wake Forest University harbors an academically rigorous environment that pushes faculty, staff and students alike to perform their best. However, everything comes at a cost and for some that cost is sleep,” said Allie Chambers ‘17, a Campus Life Fellow who works with the Office of Wellbeing and has coordinated all Sleepin’ Deacon events. “The purpose of Sleepin’ Deacon is to give people the tools and knowledge they need to improve their sleep habits and therefore their overall wellbeing.”

While an undergraduate, Chambers started the student marketing team MRKT, and has largely applied that skill in marketing efforts associated with Sleepin’ Deacon. Students may have noticed vertical mattresses displayed across campus in the library, outside of the Benson food court and in Reynolda, as well as the eye-catching picket signs spread across lower and upper quad depicting animals yawning and facts about sleep.

“We put more effort into the social media marketing that accompanies the program [this year],” said Emma Baske, who is an administrative intern with the Office of Wellbeing and has been assisting Chambers. “In terms of involvement, we have about double the number of people officially enrolled in the challenge, and I’m hoping they will all be able to complete it.”

Before the challenge began on Feb. 12, students and staff participating were asked to complete an initial survey which asked about each individual’s current sleep habits, including average bed time, whether they use technology right before bed and how many hours they typically get in a night. The survey of 55 participants revealed that the average person got 6.65 hours of sleep, as compared to the recommended minimum of seven hours.

“I believe the culture of sleep deprivation on Wake Forest’s campus is more normalized than the standard [campus],” said senior Soo JeongLee, who is doing the challenge. “The fact that the library provides late night foods during finals week proves that most students stay up late and do not get enough sleep, especially during weeks with a heavier workload.”

While Chambers is aware that the initiative may not get students to get more sleep, she hopes that students at least improve sleep quality if increasing the hours of sleep quantity is out of the question.

“We are trying to get people to not only increase the amount of sleep they are getting, but also the quality of that sleep,” Chambers said. “Sleep is essential for improving things like academic performance, memory, heart health, weight loss, and immune function, and it reduces stress, anxiety, risk of cancer, and risk of depression.”

The student organization with the most members participating will earn $200 worth of printing money at the end of the two weeks, something which motivated some students participating.

“[Printing money] would greatly help us out for marketing future events,” said senior Jessica Huang. “It also helped that I knew several other people doing the challenge as well.” Others are authentically drawn to the topic of sleep deprivation and are using the challenge as a way to improve their own habits.

“I hope that I can learn to put away my phone earlier; however I know that it won’t be an hour earlier as Thrive suggests. Electronics and entertainment are two of the biggest factors that I believe contribute to not getting enough sleep,” JeongLee said. “Stress is another category that I believe contributes to lost hours, especially on college campuses. De-stressing is a lot easier said than done.”

When asked in the initial survey what they thought would be the greatest challenge throughout the two weeks, more than half of respondents cited electronics, specifically breaking the habit of checking one’s phone before bed. The challenge guidelines recommend that participants avoid using electronics for a full hour before going to bed.

Two years ago, in 2016, online media site The Tab published an article exposing the correlation between U.S. News and World Report rankings and average student bedtimes in prominent American colleges. Data generated by fitness products company Jawbone revealed that, over the course of their three-year study, the average Wake Forest student slept 7.12 hours in a night, on par with William and Mary, but higher  than that of comparable colleges such as University of Notre Dame (6.71) and NC State (7.04).

Thanks to efforts led by CHARGE a few years ago, the ZSR Library implemented the ZieSta Room, a space with comfy chairs in the 24-hour room dedicated to allowing students the opportunity to nap while pulling late nights in the main library.

This year’s participants may earn a Wake Forest sweatshirt blanket upon completion of the challenge. Each night, participants are asked to try two of the recommended sleep tactics, which include avoiding large meals before bed, using scented lotion or aromatherapy and ensuring that one’s sleep environment is dark.

“The issue of sleep deprivation tends to be pretty prevalent among college students, regardless of the institution they are attending,” Baske said. “The main issue is that students are trying to balance so many things — class, homework, clubs, exercise, socializing, eating — so sleep is usually the first thing that gets compromised. One of the main goals of Sleepin’ Deacon is to raise awareness about how sleep affects overall wellbeing, so students can learn to prioritize it.”