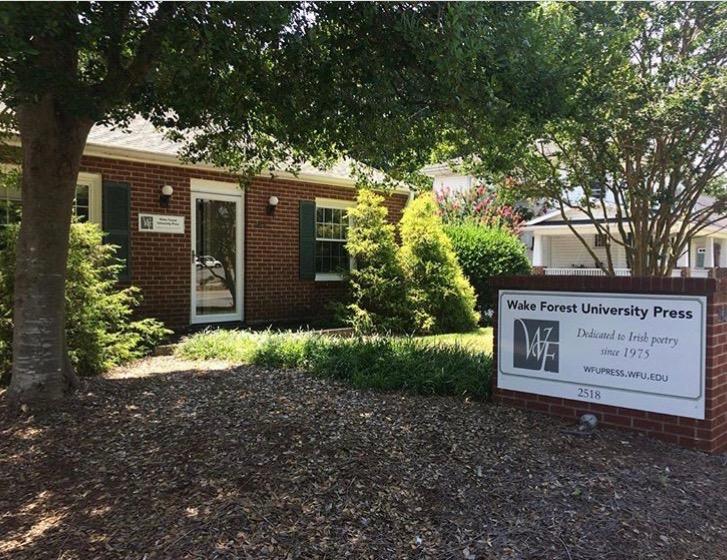 Wake Forest University Press, Wake Forest’s faculty-run publisher of Irish literature and poetry, has moved to a new location on Reynolda Road over the past summer.

Professor Jefferson Holdridge of the Department of English is the current head of WFU Press. Under his leadership, the Press has seen significant growth. For most of its time at Wake Forest, WFU Press has had to store their books in a warehouse off campus, while operating mainly on campus. Their new location eliminates much of the old arrangement’s difficulties.

“We were in Carswell for a while, and up until last year we were in the basement of Tribble,” Holdridge said. “It was a very small place, and within my first five years we had outgrown our warehouse where we housed our books.”

The WFU Press publishes the works of budding Irish poets and writers that are not normally seen in the U.S. With an American publisher, work that would otherwise never leave Ireland is able to reach new audiences with a different style of work. The new location has even helped reach local Winston-Salem audiences.

“I’ve already heard from so many folks who’ve seen our sign on the road,” said Amanda Keith, a Wake Forest professor who works with Holdridge at the Press. “Having that visibility in the community is new and exciting. People have even walked in off the road just to see what we’re all about.”

The new space not only allows for storage space and for the publishing operation to take place under one roof, but also provides a space for WFU Press to host poetry events, as well as visiting poets and scholars.

“We’ve always said that WFU Press helps expand the Wake Forest mission internationally, and now we have a welcoming place to which we can invite people,” Keith said.

Alongside Keith and Holdridge are a team of interns who help with the regular operations of the Press. Students who intern typically do so for a year and can earn credit hours in the English department for doing so.

“A good publishing intern has an appreciation for good writing, meticulous attention to detail and an ability to work efficiently,” said Katie Huggins, a Wake Forest graduate student and WFU Press intern. “In the past year and a half, I’ve really enjoyed learning about production and design skills.”

While interns are often English majors, intern positions are offered to students of any major. The smaller size of WFU Press allows interns to have a more hands-on experience with editing and publishing than at other publishers. Huggins is a fan of the new space on Reynolda Road as well.

“Our new space offers a much more tranquil aesthetic as a workplace,” Huggins said.

In particular, she said having more space and natural light made proofreading manuscripts more enjoyable. The change for WFU Press comes at a time where the traditional content of Irish poetry and literature is being challenged. Changes in the Irish population, due to the migration of Irish nationals abroad and the immigration of other European nationals Emerald Isle, have brought new faces to a culture that has widely gone unchanged for decades.

“Our poets are certainly invested in ongoing changes in Ireland,” Huggins said. “Last year, the Press published a collection of critical essays titled ‘Post-Ireland?’ which explores poetry that engages with more contemporary cultural shifts in Ireland.”

In addition to immigration, the role of faith is changing in Ireland as well. Poets published in the WFU Press have already begun to engage with the changing role of Catholicism in Ireland and how a diversifying population is addressing religion. According to Holdridge, it is an exciting time to be following  Irish writers.

“It’s difficult to say how all this will change Ireland,” Holdridge said. “Will it just change how Ireland looks, or will the society become something other than what it was? Some of our younger poets are reflecting on this new reality.”