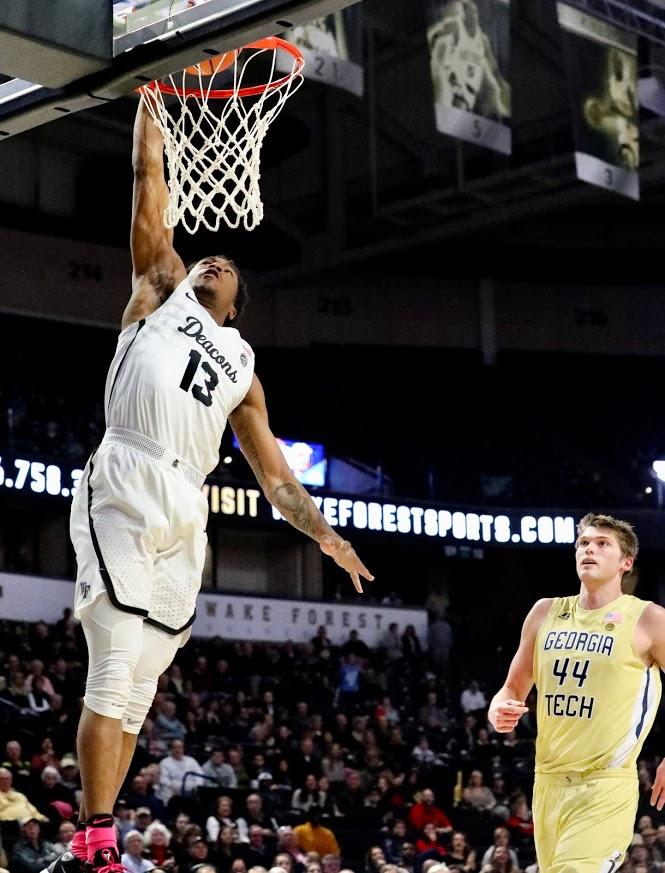 “It’s nice to get a mark in the column that we want,” said coach Danny Manning following Wake Forest’s 79-62 victory over Georgia Tech.“We’re happy about that.”

The Deacs ended a three-game losing streak, winning just the second game of their last twelve outings behind a strong offensive performance as a team, shooting 53 percent from beyond the arc with four guys in double figures.

His seven assists in the first half set the tone and his emphasis on finding high percentage attempts for his teammates grabbed the attention of Georgia Tech’s Josh Pastner.

Coach Manning agreed, saying the Deacs had a number of “hockey assists,” meaning his guys were effective in making the second, third or even fourth pass of a possession to get the least-contested look at the basket.

With nine assists, Crawford was one away from a double-double — which he would have had if Brandon Childress would have sunk a shot in the game’s final two minutes, which Childress joked required an apology after the game.

The story of Wednesday night’s game was not necessarily how well individuals performed, however, it was how well the Deacs took care of the basketball.

As a team, Wake Forest committed just five turnovers, a season low, and an indicator of success and improvement.

“I thought we did a good job of not forcing passes,” Manning said.

Crawford had zero turnovers and Childress just had one.

“Taking care of the ball got us the win tonight,” Childress said.

Wake Forest got out to a quick lead and hardly looked back. Mitch Wilbekin had three first-half three pointers, and by the end of the game’s first 20 minutes, the Deacs had made 16 of their last 23 attempts from beyond the arc, dating back to Sunday’s game at Syracuse.

In the second half, Wake Forest took over, extending the lead to 21 points with just three minutes remaining — and with a comfortable lead, was able to put in the walk-ons for the final minute of the game, something the Deacs haven’t been able to do with a lead in quite some time.

“The most rewarding thing is seeing our scout team guys get in,” Manning said after the game, seeing it as a great testament to how hard they work.

As Wake Forest enjoys its third win in ACC play this season, it also looks forward, hoping to string together a winning streak before the ACC Tournament with the words, “run the table,” being mentioned by Childress after the game.

Wake Forest will host NC State on Saturday, Feb. 17 and will look to earn its first back-to-back conference wins of the season. According to Manning, in order for his team to come away with a victory it will need to get the ball into the paint and avoid settling for long jump shots.

As for what he expects from the Wolfpack, Manning explains that they will “push tempo and be aggressive.”

Doral Moore added that paying attention to the details on defense will be crucial. If that can be accomplished, Moore believes the Deacs can “win the rest of [their] games.”

It is one game at a time, however. And if the Deacs were to “run the table,” as Childress mentioned, it will have to continue with another complete effort on Saturday, this time against a talented Wolfpack team.