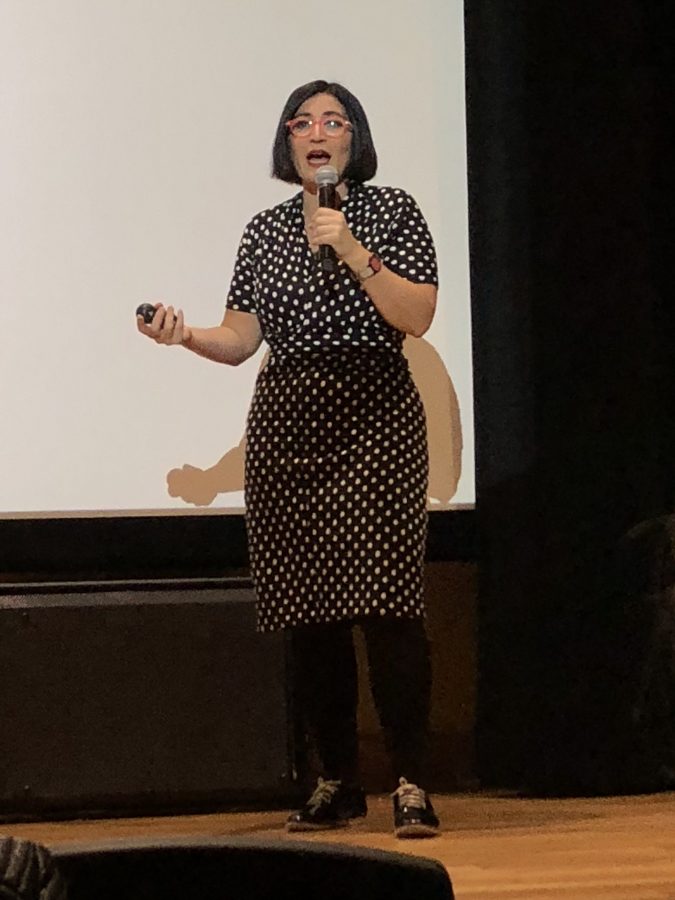 Self-deprecating, bubbly, raunchy—these qualities often characterize comedians, but these traits may not typically be attributed to Muslim Americans. Social justice comedian Negin Farsad, however, challenges stereotypes like those for a living.

Farsad, a Muslim American of Iranian descent, visited Wake Forest University on Feb. 14 and gave a semi-autobiographical talk titled “Fighting Islamophobia, Bigotry & What Have You with Comedy,” touching on topics ranging from the humorous struggles of her upbringing to her efforts to promote cross-cultural engagement.

She hopes that her approach to sharing her story will help dispel some of the stereotypes around the U.S. Muslim population, a group that grew to 3.45 million in 2017 according to Pew Research Center.

“If you’ve never met a Muslim, [I] want to be your first Muslim friend,” Farsad said.

Farsad’s efforts come at a rather tumultuous time for Muslims in America, as the Trump administration gained the right to enforce travel restrictions on multiple predominately Muslim nations in December of 2017, and many pundits fear that Trump’s administration frequently normalizes Islamophobic behavior.

Cultural influences have not stopped Farsad from standing up against powerful groups though, as in 2016 she won a lawsuit against New York’s Metropolitan Transit Authority (MTA) that granted her production company the right to post humorous pro-Muslim posters in New York subways.

One such poster stated that “Muslims hate terrorism!” with a subtext reading, “[they also hate] people who tell you they went to an Ivy League school within 10 seconds of meeting them.”

Despite the seriousness of the subject matter Farsad discussed, she never failed to keep the crowd laughing, as even her most controversial jokes generated guffaws in the audience. Farsad joked about sex, Mormons and her failed attempts to assimilate into white culture.

“There was too much Dave Matthews involved for me to be white,” she said.

No one was safe from Farsad’s comedic crosshairs, as Muslims, Jews and politicians were all the butt of at least one joke over the course of the evening. Farsad even took aim at herself, revealing secrets about her insecurities and identity crises.

During her teenage years in Palm Springs, California, Farsad felt a desire to be a part of the rich Mexican culture in the city. She quipped that the appeal of Cesar Chavez, Mexican radio and tacos attracted her, but as a Muslim American, she could never quite fit in with the culture around her.

In 2013, Farsad collaborated with several prominent comedians, including Jon Stewart, David Cross and Lewis Black, when making her feature film “The Muslims are Coming!,” which chronicled the escapades of a Muslim-American comedy group who visited small towns nationwide. During their tour, Farsad and company interacted with locals in an effort to bridge the gap between the sensationalized depiction of Muslims on television and the real people who comprise the Muslim-American community.

Farsad continues to discuss the confusion that she felt during her youth, and her recent book “How to Make White People Laugh,” which her website describes as a “memoir-meets-social-justice-comedy manifesto,” explores some of these issues of her past and the issues that Muslim Americans presently face.

Though the method Farsad uses to advance social justice efforts defies the norm and could unsettle more traditional individuals, her focus on relatability and approachability provides a fresh take on how to deal with significant social problems.

“When you have different generations, there are different ways to get across to them,” Dalia Namak, a Wake Forest student said. “It is a different message, so I think she did appropriately.”