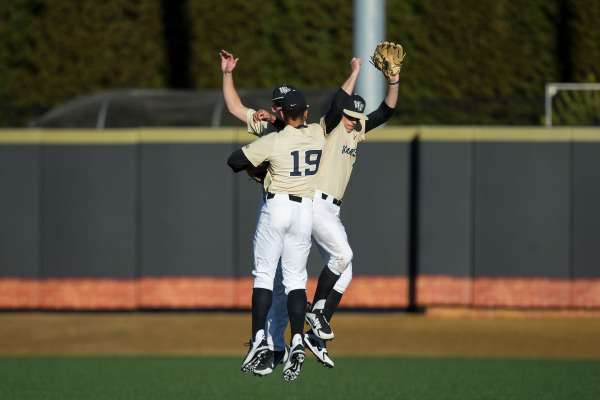 The Demon Deacon baseball team sits at 2-3 after opening their season over the weekend with a solid showing, going 2-2 across four games against Georgetown, Navy and Gardner-Webb and dropping a game on Tuesday night at Davidson 3-1.

The Demon Deacons played one of their most impressive seasons in recent history in 2017, and the team made it to the Super Regional before losing to the Florida Gators, who eventually went on to win the College World Series.

After losing multiple players to the 2017 MLB First-Year Player Draft, the Demon Deacons were left with several positional holes to fill before the start of the 2018 season, but the results over the weekend were encouraging.

Three other Wake Forest freshman saw significant time at the plate to start the season, including catcher Shane Muntz, first baseman Bobby Seymour and utility player Chris Lanzilli. There is no doubt that the team’s success this season will be contingent upon how quickly these young players settle in at the college level.

Aiello, who some considered to be the best third baseman in college baseball leading up to the season, struggled at the plate, going 2-15 with no home runs.

The junior hit .328 with 20 home runs in 2017, and the Demon Deacons will require to be the linchpin in a lineup that lost several of its most productive hitters.

On the pitching side, Griffin Roberts, who primarily worked as the closer in 2017, made his debut as a starting pitcher on Friday against Georgetown. Roberts dominated through the first five innings, striking out eight and allowing just two hits. His only mistake of the afternoon came in the sixth inning when he threw a bad pitch to Georgetown’s Sammy Stevens that resulted in a 2-run home run.

Roberts certainly proved that he is capable of dominating as a starting pitcher, as he controlled a fastball that sat in the mid 90s and utilized his breaking pitches to rack up nine strikeouts.

Freshmen pitchers Jared Shuster and Antonio Menendez each made their first career starts, but neither was able to stay on the mound for long, and the pair combined for six earned runs in seven innings across their multiple appearances over the weekend.

The team travels to Santa Clara this weekend for a three-game series against the Broncos, who went 13-40 last season.