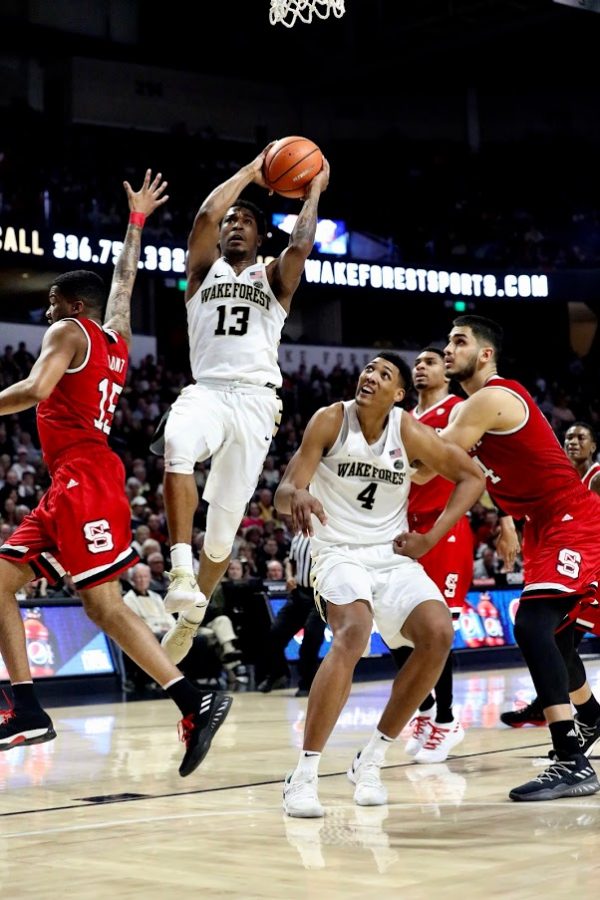 After the Wake Forest Demon Deacons fell to the NC State Wolfpack, 90-84, Coach Danny Manning summed up the home performance last Saturday stating: “We did some okay things, but we got to do better.”

While the storyline seems to echo several matchups this season, Wake Forest continues to play hard at the end of the regular season. On Jan. 18, Wake Forest fell to NC State on the road in Raleigh and lost by nine points.

The noticeable absence of Dinos Mitoglou and John Collins seems to have thrown off the team’s rhythm for the season, making fans and coaches wonder, “Who is going to turn it on today and be the glue for this team?”

From a purely statistical perspective, the Demon Deacons were up a bit with an overall field goal percentage of 45.1 percent against the Wolfpack compared to a season average of 44.7 percent. However, in terms of three point shots, the team struggled and shot 26.3 percent from the three-point line, a significant dip from the team’s season average of 38.7 percent.

Struggling with his ankle this season, senior Mitchell Wilbekin could not seem to connect with the basket and shot one for eight field goals and zero for five three-point shots throughout his 31 minutes of total play. Keyshawn Woods also struggled off the bench, shooting four for 13.

On an exciting note, juniors Doral Moore and Bryant Crawford both had career high scoring records, scoring 29 and 23 points, respectively, and served as the glue for the team during this matchup, but it was not quite enough. Comparatively, four of five members of the NC State Wolfpack’s starting lineup broke double-digits during this game. Perhaps the most notable of these players is shooting guard, senior Allerick Freeman who had 24 points total and consistently puts up big numbers and has led the team to an 18-9 season record. Moore’s ability to fight for seven offensive rebounds and five defensive rebounds was one of the reasons the Demon Deacons kept it so close throughout this game.

At the beginning of the first half, Wake Forest made some good shots right off the bat as they usually do. With 12 minutes left to go in the first half the Wolfpack had a five-point lead which continued throughout the rest of the half.

While NC State was leading by six points at the end of the first half; both teams had 16 baskets in the paint and Wake Forest had 11 fast break scoring plays. This set the tempo for the first half.

Coming off a decent first half performance, the Demon Deacons were able to gain some momentum in the middle of the second half when NC State only had one good jumper by Omer Yurtseven within a three-minute stretch.

Sadly, Wake Forest had a similar stretch a bit later on with six minutes left to go. With about four minutes left, NC State was able to establish a ten-point lead, but Wake Forest put significant pressure on the Wolfpack to try and close the gap.

After the game, Manning commented, “they moved the ball and made some tough shots on us.”

It is always the last few minutes that seem to be the greatest struggle for the Demon Deacons on both offense and defense, but overall, standout performances by both Crawford and Moore are what kept the team in the game.