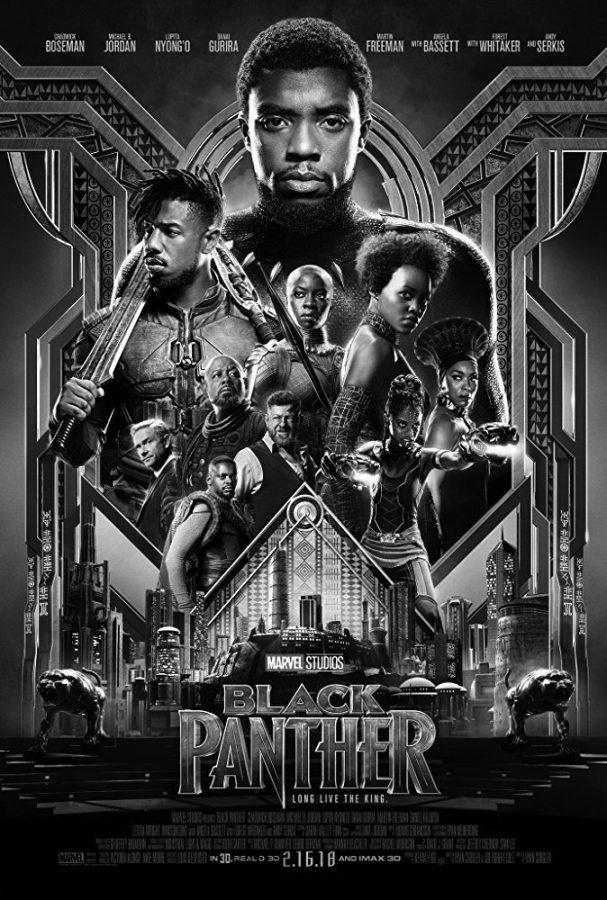 If you have not gotten the chance to see Black Panther, drop everything you are doing and take a trip down to the movie theater. This movie is beautifully written and puts a deep focus on various social issues. Black Panther is an incredible addition to the Marvel Universe.

The movie predominantly takes place in a small African nation called Wakanda but briefly ventures out into other parts of the world. With the recent death of their king T’Chaka, in Captain America Civil War, it is time for Prince T’Challa to take his rightful place on the throne and as the Black Panther. There are a small few that believe T’Challa is not capable of being king, and throughout the movie he struggles to find a balance between kindness and tenacious leadership.

The powers of the Black Panther date back centuries, when man had just come to be. There were four tribes that lived in present day Wakanda that fought over the precious metal vibranium, that resided in the land. Eventually the Panther God came to one man in the tribes and led him to a plant that gave him the strength and cat-like reflexes of a panther. This power is then passed down through the many generations of descendants of the original Black Panther. T’Challa has many foes to face during the duration of the movie, one being himself and the others being physical threats to his people, the nation of Wakanda, and the rest of the world.

What truly makes this movie stand out compared to other Marvel Movies are the various social issues it addresses. The movie’s director, Ryan Coogler, expertly balances the typical Marvel theme of heroism with the ideas of bringing about social change in African American communities in particular. One recurring debate that all characters in the movie address is if Wakanda should send aid to struggling communities that are faced with brutality and oppression, and if so, how much aid they should provide. The villain of the movie is consumed with sending aid to all of the struggling communities, but he does so through extreme measures and hopes to supply these communities with weapons of immense power. The protagonists hope to provide aid in different ways through shelters and other programs to better these communities.

Furthermore, the movie incorporates strong leading roles for females. T’Challa is supported by four very important, strong, intelligent and independent women: his mother, his sister, the general of the Wakandan army and his ex-girlfriend Nakia. T’Challa’s younger sister, Shuri, is the country’s number one scientist and she comes to T’Challa’s aid on countless occasions. She develops all of the modern technology used by Wakanda and is extremely innovative in the ways that she uses and handles vibranium.

The Wakandan army general, Okoye, stands next to T’Challa in battle and saves him on countless occasions including the first fight scene of the movie. She is a strong character that has a deep love and loyalty for her country and as the strongest warrior of Wakanda, she plans to protect it with her life. Finally, T’Challa’s ex-girlfriend and Wakandan Spy, Nakia. Nakia’s main calling is to help those who are in need, she is a determined woman who puts others before herself. Nakia hopes to influence T’Challa to help change the world and make it safer for those who are oppressed or in danger.

I hope that everyone is able to experience Black Panther. It is an amazing movie that strives to bring the world closer together and promotes love over hatred. The movie emphasizes the importance of helping those less fortunate than you and most importantly addresses the present social issues of oppression and brutality. The movie will take you on an emotional roller coaster through tears, laughter and hope for the future that T’Challa hopes to build. Black Panther will return in Marvel’s Infinity War in May 2018.