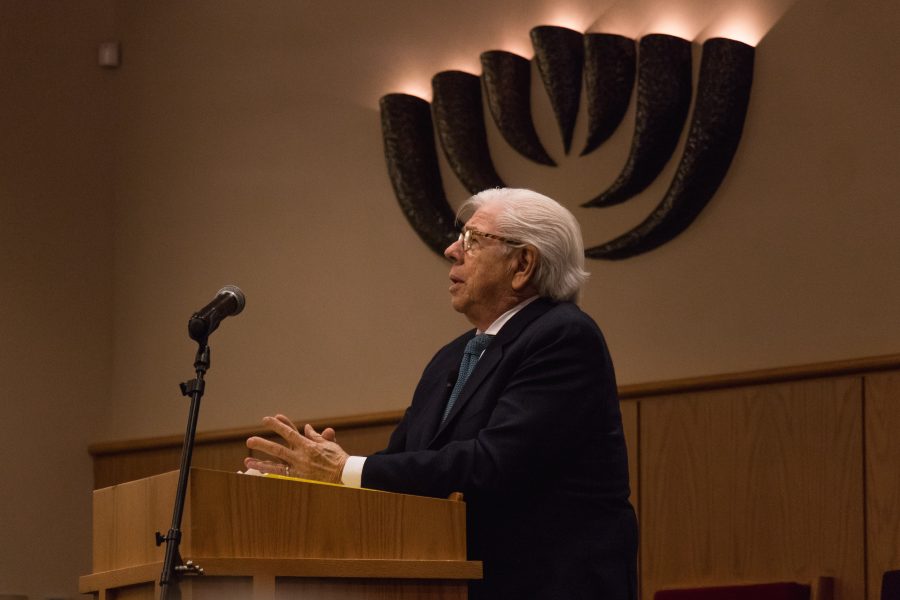 “The best obtainable version of the truth.” Renowned journalist Carl Bernstein repeatedly emphasized this ideal, which he said has guided his decades-long career in reporting, at his lecture at the Temple Emanuel synagogue on Feb. 24. Bernstein was sponsored by the Winston-Salem branch of the United Jewish Appeal and spoke to more than one hundred congregants and members of the Winston-Salem community.

As a young reporter for the Washington Post in the early 1970s, Bernstein teamed up with his colleague Bob Woodward and did much of the original reporting that uncovered the Watergate scandal and corruption in Richard Nixon’s White House, leading to numerous government investigations and Nixon’s eventual resignation.

His career since Watergate has continued to focus on the use and abuse of power in government, and he is the author or co-author of six books including “All the President’s Men,” which recorded his reporting efforts with Woodward; “The Final Days,” which concerned the last months of the Nixon administration; and “A Woman in Charge,” the standard biography of Hillary Rodham Clinton.

Bernstein opened his lecture by reflecting on his early reporting days as a copy boy for the Washington Star, which he self-deprecatingly said often out-reported the Washington Post. In 1960, when he was 16 years old, he was sent to most of then-candidate John F. Kennedy’s press conferences to dictate a running text back to the newsroom. There, he noticed that the investigative reporting necessary to keep tabs on politicians, no matter who holds office, just wasn’t happening.

“And whatever Kennedy’s failings, he instilled a sense of common purpose and promise to Americans of all backgrounds,” Bernstein said. “But there’s no question that the press, in its real failure to use the methodology of investigative reporting during the Kennedy administration, left us with a distressingly incomplete picture of the man.”

Despite the fact that he was a teenager, while he was at the Washington Star he became committed to the two ideals that he said inform what journalists do: that the press exists for the public good — not for entertainment or controversy — and as he said many times throughout his lecture, to provide the “best obtainable version of the truth.”

These are ideals, Bernstein said, that convey power and responsibility and are crucial for today’s journalists to remember and exercise with humility, fairness and perseverance. However, he insisted that part of providing the “best obtainable version of the truth” is admitting and correcting mistakes.

“We’ve had the greatest reporting I’ve ever seen since the beginning of the Trump presidency, but only during egregious failure during the primaries,” Bernstein said.

He lamented the free air time President Donald Trump was given as a candidate just because he provided “great theatrics and good television.” He also acknowledged the lack of solid investigative reporting about the facts and context surrounding the candidates’ lives and what people working around them had to say.

Bernstein also expressed concern about the political divisions that plague the country and their impact on media consumption. He called the U.S. political dynamic a “cold civil war,” and said that Americans often isolate themselves in echo chambers and seek only the political information that reinforces their pre-existing views.

Much of Bernstein’s lecture focused on commenting on the Trump administration and its parallels with history. While similarities are often drawn between Trump and Nixon, he asserted that the country is in uncharted territory and that if comparisons are to be made between Trump and a historical politician, that politician would be Joe McCarthy, not Nixon.

“The only comparable leader that I can think of that has posed the kinds of questions about authoritarianism is Joe McCarthy, and Joe McCarthy was never the president of the United States,” Bernstein said.

He emphasized that the current situation is very different from Watergate; he said that at the time, the real heroes of Watergate were Republicans, as they were crucial in casting votes in the Sen. Judiciary Committee against a member of their own party. For example, he told the story of U.S. Sen. Howard Baker, a Republican Senator from Tennessee and Majority Leader who was loyal to the White House at the beginning of the investigation. Baker promised Nixon, “I’m your friend. I’m going to see that your interests are protected.” Later, though, he became famous for asking aloud, “What did the president know and when did he know it?” Bernstein noted that Republicans today haven’t had a similar change of heart to put national interest above partisanship as they continue to defend the president. Another difference Bernstein identified between the Watergate crisis and today was that a consensus developed among Americans — that Nixon had to leave office because he was a criminal — which has yet to happen concerning Trump.

He also said that Trump’s pejoratives directed at the media — “enemy of the people,” “fake news” — are reminiscent of Nixon’s hostile rhetoric. However, he insisted that the role of the media is not to remove politicians from office — that’s the job of voting and civil engagement. “Richard Nixon brought down Nixon; Woodward and Bernstein didn’t bring down Nixon,” Bernstein said.

When asked if one of Trump’s most frequent complaints against the media has any truth, that it has a systematic anti-Trump bias, Bernstein simply said no. “Good reporting is not about blind neutrality,” he insisted. “It is about fairness.”

Although a few comparisons can be made between Watergate and today, Bernstein emphasized the unprecedented nature of the Trump administration.

“We have a president who exemplifies an almost aberrant authoritarian tendency or worse, who lies with a kind of impunity that we have never seen in a president of the United States in my time,” Bernstein said.

Ultimately, Bernstein predicted that the country has a “rough ride” ahead, but returned to the words of Ben Bradlee, the executive editor of the Washington Post when the Watergate story broke. “The more aggressive our search for the truth, the more offended people will be,” Bradlee said. “So be it. That’s what I believe.”