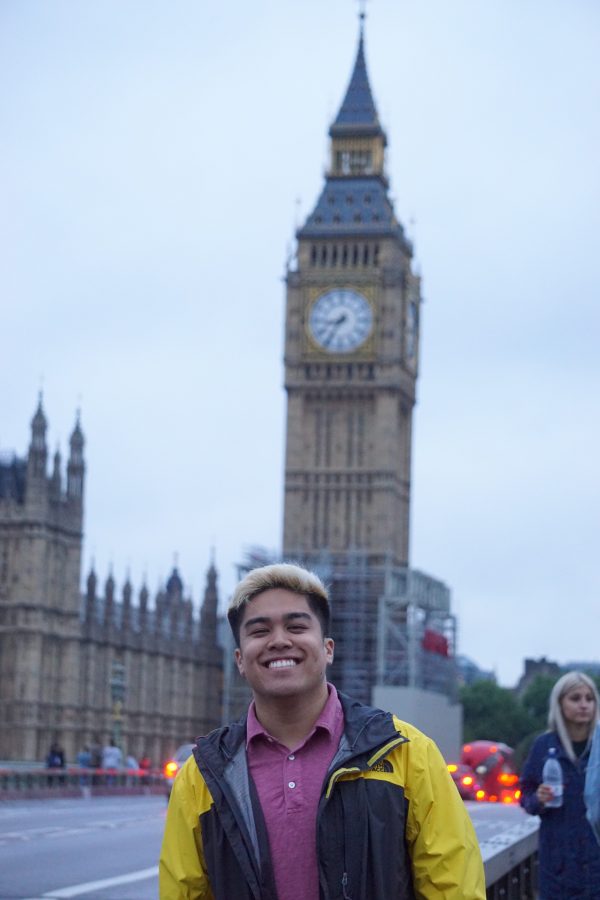 Junior Francis Sto. Domingo is a singer who said that he loves performing because  he sees it as a gift to the audience and an opportunity to take people away for a time to just enjoy themselves.

As well as performing with Plead the Fifth, an all-male a cappella group on campus, he has competed on The Filipino Channel (TFC) Kat, a TFC singing competition, and progressed to finals.

How old were you when you started singing? How did it start?

I was around two or three when I started singing songs in Tagalog, the dialect of the mainland Philippines, on a karaoke machine in our small South Carolina town. It was one of my family’s favorite pastimes, and at that time family bonding in general kept my family’s mind off of the difficulties my parents faced when they first immigrated here from the Philippines.

After that, I just continued with it, later forming a band with my brothers and best friend and playing for around six years.

How much of singing is natural talent and how much is hard work or practice?

I feel especially blessed to have the position to share my passion of singing and performing whenever I can. I’ve never been formally trained or anything, but I would say that for me personally, I’ve had to make up for that lack of training with practicing for gigs for hours on end. I really love it, though, and I think it pays off when I do a gig and am able to help people have a great time; therefore, I’d say half and half if you love doing it.

What is your favorite genre to sing? How about to listen to?

My parents exposed to me to more genres than I can count growing up, especially R&B and Motown. I have to thank them for growing me up on Stevie Wonder, Boyz II Men and MJ, which really influenced my favorite style of music to sing and perform. I’m also heavily influenced by John Mayer and Bruno Mars too. I love listening to these artists and many hip-hop and rap artists.

Do you have a go-to song?

My go-to song actually constantly changes. At the moment it’s probably “Best Part” by Daniel Caesar and H.E.R. The song is beautiful writing at its finest.

Do you ever get nervous performing on stage or in front of people? How do you combat that and not let it affect your performance?

I used to get quite nervous when I started out, but I think from doing a music program during the summer of 2013  in Boston — the Berklee School of Music Vocal Summit — I changed my view of performing. I now see performing as a gift to the audience and an opportunity to “take people away” for a bit to just enjoy themselves. I will say that I still get nervous today before singing, but as soon as I start, I get in my zone and just have fun with it.

You were a finalist a few years ago on TFCKat, a Filipino singing competition — what was that like?

It was amazing and unforgettable, to be honest. I traveled out to California to compete against four other finalists in a singing competition that was actually televised on one of the main media networks in the Philippines. I actually learned about how televised singing competitions work (which is different to what viewers see on-screen), but the most fruitful part for me was being able to get over my performance fear by singing in front of around 2000 people. Regardless of the competition, it was more of a learning and growing experience overall.

What did it mean to you to be able to compete on TFCKat and to make it to be a finalist?

It was absolutely humbling to have taken part in the competition and I grew by learning to work the largest crowd I’ve ever had. Both my family and I were completely surprised when my name was called as a finalist, and at times it was strange to experience close to what famous musicians feel like with “fans” and whatnot. The best part was realizing that performing for me was truly something I loved doing for the sake of it, rather than for trying to pursue fame or something. If I can help people with it then great, but the celebrity aspect does not really appeal that much.

Other than TFCKat, have you auditioned for other major talent competitions?

I once tried out for The Voice a while back. I did not make it unfortunately, or see any of the four judges like I was hoping. Now that I am older and a little bit more experienced, part of me low-key wants to try again for fun.

How do you prepare for any sort of audition or performance?

I have a funny “pre-game” ritual that involves vocal exercises, stretching and breathing deeply to get all the nerves out. Also I always drink  green tea and a shot of honey before I sing. Mentally and spiritually I recenter, meditate, pray a little and remind myself what I’m singing at the event for.

You sing with Plead the Fifth, one of Wake Forest’s a cappella groups. What part do you sing in the group?

In Plead the Fifth I sing Tenor 1 and 2 and occasionally solo as well.

How different is it singing in a group versus singing solo? What are the pros and cons of each?

Singing in a group is fun and challenging as it requires that every member be on the same wavelength and listen to each other. If one of us is off-key or misses a note or does not know their notes, one possible disadvantage is that every other member can be affected and may go flat or sharp to match each other.

Singing solo with a band requires the same type of synchronicity, but I feel that it’s a bit easier to give signals in a band of when to slow down/speed up/stop. The drummer, I also feel, is the heart of a band performance, as they lead the rest of the members and can signal these changes as well.

What’s the best thing about a cappella? How about a misconception about a cappella, which has gained a lot of attention in the past few years with media like Pitch Perfect?

I think the best thing about a cappella is the camaraderie in learning a song and being able to hear the group sing major/minor/diminished chords together. Singing in a stairwell where the acoustics are amazing also makes a cappella so worth it when one can actually hear the group’s work come to fruition. There’s also a lot of mentorship with the group as well. We all learn a lot from each other.

One misconception I think media may portray is that a cappella is mostly competitive and there are rivalries between groups. I’d say that occurs occasionally, but in my experience, it really depends on the members that make up the groups.

Sometimes in groups there are clashing personalities and visions on how a group should function, but in Plead the Fifth for example, we all pretty much look out for each other/respect each other.

As well, when we travel to see other groups perform, we all understand how hard it is to be in a cappella, so there is a great sense of mutual respect rather than rivalry.

Are you involved in other singing-based activities here on campus?

Every Sunday, I help sing for the Catholic Community Masses and some Chaplain’s Office events as well. Here and there I find an Open Mic to do too, and this year I will thankfully get to take part in performing for  Wake-and-Shake again.

When you’re not singing, what are you doing?

Other than singing, I love being a part of several amazing and welcoming groups on campus, especially being on leadership team for Wake Forest Catholic Community, as well as a member of Muslim Student Association and more. If not taking part in activities with these groups or with my best friends, I’m cooped up studying in the library with a questionable amount of coffee.

In terms of singing, what are your hopes for the future?

Music is such an important part of my life that I would want to keep doing it for the rest of my life while simultaneously pursuing a career in medicine.