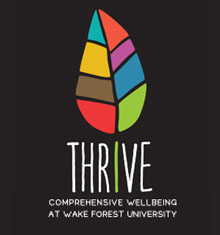 Photo Courtesy of the Office of Wellbeing

For National Eating Disorder Awareness (NEDA) Week, which ran from Feb. 26 to March 4, the Wake Forest PEERS (Peers, Educating, Engaging, Reaching, and Supporting) prepared a series of events to promote body positivity, eating disorder awareness, and self-care called “Wake the Beautiful” with the support of Thrive and the Office of Wellbeing.

The Wake Forest Certified Peer Educators are students committed to raising awareness about high-risk behaviors and common issues that college students face, while providing support and resources to the campus community. “Wake the Beautiful” is one of their key projects of the spring semester. Assistant Director of Wellbeing and PEERS Program Advisor Suzanne Hunt summarized the goals of the initiative,

“Wake the Beautiful is a student-led initiative to inspire the campus community to embrace body positivity,” Hunt said. “This initiative is held during National Eating Disorder Awareness Week, to promote awareness of eating disorders, while empowering the campus community to prioritize their personal wellbeing in a way that works for them. This movement is to reiterate that our bodies are healthy at different sizes; it isn’t all about looks or weight.”

On Feb. 25, the PEERS kicked off the initiative with a scale smash outside of Zick’s. Insecurities and concerns about weight affect many Americans, including those without eating disorders. Smashing scales is a symbolic rebuttal against societal beauty standards and stigma surrounding weight and health. Students were also encouraged to read handouts prepared by NEDA about self-care, dieting, body-image, and eating disorder awareness.

On Feb. 26, Deacon Dining, the Chaplain’s Office, and the PEERS collaborated to host a mindful cooking class. The following day, the PEERS educators hosted trivia about nutrition and mindful consumption at Shorty’s. On Feb. 28, the PEERS hosted a talk called “Getting Whole-Hearted” by activist and speaker Rosie Molinary.

She discussed the importance of being able to say no while maintaining relationships and practicing self-compassion.

In addition, PEERS promoted the events and eating disorder awareness in the Pit during lunch hours throughout the week.

The Office of Wellbeing hopes to continue to host a “Wake the Beautiful” week annually. Peer Educator Catherine Carlson, who was instrumental in founding “Wake the Beautiful” two years ago, described the origin and the goals of the week, stating, “When I came to Wake Forest freshman year, I felt an absence of discussion around eating disorders. That spring I attended some of the events taking place during Mental Disorder Awareness week and that is when Wake the Beautiful was formed. The week was intended to raise awareness of and discussion about eating disorders on campus, but I have enjoyed seeing the program take the shape of encouraging overall wellness and self-care in students. Wake Forest students work hard and prioritize a lot over themselves, so I hope that this week inspires students to take the time for self-care and use food to help fuel their bodies.”

Although “Wake the Beautiful” is coming to a close, the PEERS Educators still have more events planned for the rest of the year. The “Signs of Stress” week-long initiative will begin on March 19. The event is intended to raise awareness about stress and mental health on campus. The University Counseling Center will provide free mental health screenings and the Office of Wellbeing will hold fun events including a petting zoo and a painting session.

“The PEERS program is an incredible platform to reach students and address different aspects of wellbeing in a collaborative setting. Personally, this program has equipped me with the skills to facillitate difficult conversations about drugs and alcohol, as well as other lifestyle issues, with my classmates. PEERS is a unique relative to other wellbeing initiatives because it is a group of nationally certified students reaching out to other students in order to raise awareness about widespread concerns on campus and to encourage education of such issues.”