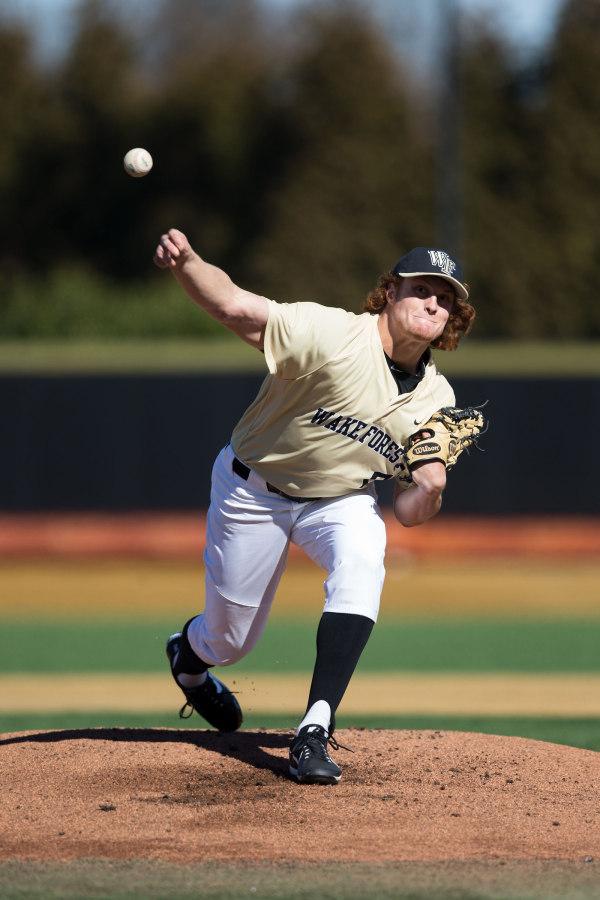 The Wake Forest baseball team traveled to Silicon Valley over the weekend to face the Santa Clara University Broncos in a three-game series. The Demon Deacons fell short in two close contests to begin the series, but they came away with a 3-1 win on Sunday, Feb. 25, to avoid the sweep.

Junior Griffin Roberts took the mound in game one for Wake Forest and allowed just two runs in 6.1 innings. He also struck out 10 Santa Clara hitters, continuing his blistering strikeout pace. The Demon Deacon bats fell completely silent, however, leaving 14 men on base and striking out 16 times on their way to a 2-0 loss.

Wake Forest led 6-4 before the bottom of the ninth, when Santa Clara rallied to score two runs, spoiling Morgan McSweeney’s save opportunity and sending the game into extra innings. Santa Clara eventually won on a Joe Becht walk-off double in the 14th inning,

In game three, Wake Forest managed to avoid a three-game sweep, defeating Santa Clara 3-1 in the afternoon series finale and improving their season record to 3-5.

Peluse’s stellar performance helped rest a Demon Deacon bullpen that had been depleted during the 14-inning game the day before, and his role as a rotation workhorse was solidified, as he threw 108 pitches.

Though Wake Forest does not appear to be the offensive powerhouse that hit 106 home runs last season, if some of the young starters find their rhythm at the NCAA level, the Demon Deacons could be poised to shock opponents once conference play begins. In order for the offense to fire on all cylinders, Aiello, who produced an excellent OPS of 1.060 last season, will need to rediscover his 2017 form. Through the first eight games of the season, Aiello has struck out in 33 percent of his plate appearances, has yet to hit a home run and has produced a paltry batting average of .167.

The sample size is small, though, so Aiello could easily finish shaking off the rust of the offseason and regain his elite prowess at the plate in the coming weeks. Until then, Wake Forest will need contributions from its less prolific hitters while Aiello works through his slump.

Wake Forest will host UMass Lowell, who is 2-5 this season, over the coming weekend for another three-game series.

ACC play will begin on Friday, March 9, when the Florida State Seminoles come to town.