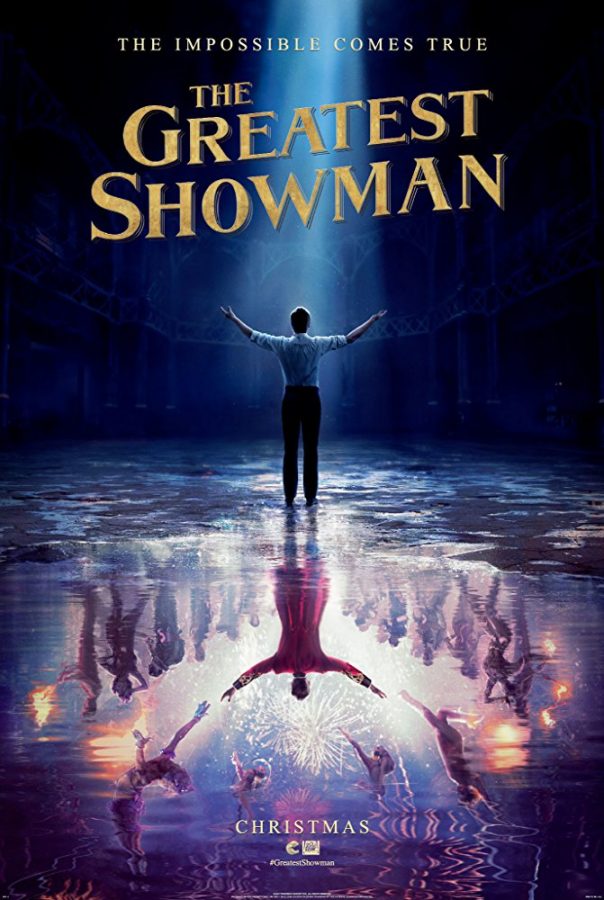 “Ladies and gents, this is the moment you’ve waited for (woah) / Been searching in the dark, your sweat soaking through the floor / … This is the Greatest Show.”

Inspired by the life and story of P.T. Barnum, The Greatest Showman is an energizing, heartening original movie musical chronicling the ‘rags to riches’ story as Barnum began the first circus over a century ago. Although I am not usually interested in musicals, the soundtrack enhanced the movie experience and added to the splendor of the show.

The story begins with “The  Greatest Show,” song, foreshadowing what will become of the circus by the end of the film. After the first few clips of the successful circus, the song ends with a teenage boy, P.T. Barnum, looking in on a shop from the outside. We quickly learn Barnum is a poor, scrappy young teenager living with his father who works as a tailor outside New York City. The story moves through Barnum’s early life, as his childhood crush is forced to move away, leaving him heartbroken but not hopeless. Barnum’s drive and ambition for success was apparent from the beginning of the movie, as he promised his childhood love, Charity, a prosperous life together.

The movie transitions and takes a big leap in time to Barnum and Charity as adults. We see them move into their first apartment and have two adorable daughters, but also watch them struggle together to make ends meet. The magic begins once Barnum is laid off from his desk job and is inspired to put together the initial plans for his show.

As the circus comes together we are introduced to the more unique characters of the show: from the bearded lady with an angelic singing voice to a fully-tattooed man and someone covered head to toe in hair. As Barnum is inviting these characters to join his circus, he speaks truth to these lifelong misfits: “You stumble through your days/ Got your head hung low/Your skies’ a shade of grey/Like a zombie in a maze/You’re asleep inside/But you can shake awake.”

This is where we see Barnum’s true talent awaken; he recognized how to reach these societal outcasts where they were and bring them into the circus, eventually leading them to fame and acceptance.

While there were conflictual issues and romance scattered throughout the movie, it ultimately sticks true to one constant message: of accepting and celebrating everyone’s differences. Barnum falls from grace after being tempted by fame and glory, but is ultimately humbled after his family leaves him and his circus is destroyed by a fire. This is when the famed circus tent came into play, as the destroyed building was too expensive for the penniless circus to rebuild. Joined in the special bond with his circus, Barnum and his associate, played by Zac Efron, decide to open a tent on the outskirts of New York City.

“My favorite part of the movie is probably when it comes full circle when Barnum realizes he doesn’t need a building for a show, all he needs is a tent,” Meghan Faherty said, a self-proclaimed lover of The Greatest Showman.

Overall, the film did not receive outstanding reviews, with critics citing it as cliche, boring or overly-dramatic. I very strongly thought the opposite, however, as I felt The Greatest Showman was an inspiring story of social mobilization and acceptance of differences. The music is an outstanding mix of upbeat, toe-tapping songs combined with soulful ballads.

“I think the movie really was perfect for any audience,” Faherty said. “I didn’t think I was a huge fan of musicals, but this soundtrack was incredible and every song just added to the movie.”